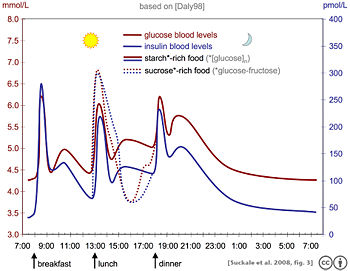 This idealized diagram shows the fluctuation of blood sugar (red) and the sugar-lowering hormone insulin (blue) in humans during the course of a day containing three meals. In addition, the effect of a sugar-rich versus a starch-rich meal is highlighted.

Hyperglycemia, or high blood sugar, is a condition of abnormally high levels of glucose in the blood. Such excessive concentrations of blood sugar circulating in blood plasma most commonly results from type 1 or type 2 diabetes mellitus, but also can occur from other circumstances, such as illness or infection. Generally, hyperglycemia (or hyperglycaemia) is more specifically defined as any blood glucose level consistently exceeding 126 mg/dL (or 7 mmol/L). Hyperglycemia is contrasted with hypoglycemia in which blood glucose in circulating blood is consistently below 70 mg/dL (or 4 mmol/L).

Hyperglycemia represents a breakdown in the normal system that maintains glucose levels within an acceptable range. It is a treatable condition, but if not addressed it can develop into one of two life-threatening complications: diabetic ketoacidosis (DKA) or hyperglycemic hyperosmolar nonketotic syndrome (HHNS).

Various conditions can affect the level of blood glucose levels above or below the normal range. One of the most well-known of these is diabetes mellitus, a condition where there is abnormally high blood glucose levels. The two most common forms of diabetes are due to either a diminished production of insulin (in type 1), or diminished response by the body to insulin (in type 2 and gestational). Both lead to hyperglycemia, which largely causes the acute signs of diabetes: excessive urine production, resulting compensatory thirst and increased fluid intake, blurred vision, unexplained weight loss, lethargy, and changes in energy metabolism. Patients with type 1 diabetes mellitus depend on external insulin for their survival because of an absolute deficiency of the hormone. Patients with type 2 diabetes mellitus have insulin resistance or relatively low insulin production, or both; some type 2 diabetics eventually require insulin when other medications become insufficient in controlling blood glucose levels.

Hyperglycemia results when there is an abundance of glucose in the bloodstream, such as when the glucose in the blood cannot enter cells. The hyperosmolar, glucose-rich blood draws fluid from the intracellular and interstitial spaces and causes thirst and dehydration (Fain 2001). Chronic hyperglycemia can result when diabetes is untreated or poorly controlled, while acute hyperglycemia can result when there is an underlying condition that interferes with glucose control, such as an illness or infection, as well as those with type 2 diabetes that are under extreme stress (Fain 2001).

The term hyperglycemia comes from the Greek hyper, meaning "excessive," -glyc-, meaning "sweet," and -emia, meaning "of the blood."

Glucose levels are measured in either:

Scientific journals are moving towards using mmol/L; some journals now use mmol/L as the primary unit but quote mg/dL in parentheses.

Glucose levels vary before and after meals, and at various times of day; the definition of "normal" varies among medical professionals. In general, the normal range for most people (fasting adults) is about 80 to 120 mg/dL or 4 to 7 mmol/L. A subject with a consistent range above 126 mg/dL or 7 mmol/L is generally held to have hyperglycemia, whereas a consistent range below 70 mg/dL or 4 mmol/L is considered hypoglycemic. In fasting adults, blood plasma glucose should not exceed 126 mg/dL or 7 mmol/L. Sustained higher levels of blood sugar cause damage to the blood vessels and to the organs they supply, leading to the complications of diabetes.

Chronic hyperglycemia can be measured via the HbA1c test. The definition of acute hyperglycemia varies by study, with mmol/L levels from 8 to 15 (Giugliano et al. 1997;

Certain eating disorders can produce acute non-diabetic hyperglycemia, as in the binge phase of bulimia nervosa, when the subject consumes a large amount of calories at once, frequently from foods that are high in simple and complex carbohydrates. Certain medications also increase the risk of hyperglycemia, including beta blockers, thiazide diuretics, corticosteroids, niacin, pentamidine, protease inhibitors, L-asparaginase (Detin et al. 1994), and some antipsychotic agents (Luna and Feinglos 2001).

A high proportion of patients suffering an acute stress such as stroke or myocardial infarction may develop hyperglycemia, even in the absence of a diagnosis of diabetes. Human and animal studies suggest that this is not benign, and that stress-induced hyperglycemia is associated with a high risk of mortality after both stroke and myocardial infarction (Capes et al. 2001).

Hyperglycemia occurs naturally during times of infection and inflammation. When the body is stressed, endogenous catecholamines are released that, among other things, serve to raise the blood glucose levels. The amount of increase varies from person to person and from inflammatory response to response. As such, no patient with first-time hyperglycemia should be diagnosed immediately with diabetes if that patient is concomitantly sick. Further testing, such as a fasting plasma glucose, random plasma glucose, or two-hour postprandial plasma glucose level, must be performed.

A transient hyperglycemic episode also can be triggered by a stress that overtaxes a person’s mental resources (Culvert 2005).

The following symptoms may be associated with acute or chronic hyperglycemia, with the first three comprising the classic hyperglycaemic triad:

Frequent hunger without other symptoms can also indicate that blood sugar levels are too low. This may occur when people who have diabetes take too much oral hypoglycemic medication or insulin for the amount of food they eat. The resulting drop in blood sugar level to below the normal range prompts a hunger response. This hunger is not usually as pronounced as in Type I diabetes, especially the juvenile onset form, but it makes the prescription of oral hypoglycemic medication difficult to manage.

Symptoms of acute hyperglycemia may include:

Treatment of hyperglycemia requires elimination of the underlying cause, such as treatment of diabetes when diabetes is the cause or removal of stressors. Acute and severe hyperglycemia can be treated by direct administration of insulin in most cases, under medical supervision. Treatment of hyperglycemia should be done with close monitoring and delivered carefully in order to avoid the risk of hypokalemia (higher than normal blood serum levels of potassium) and subsequent edema (Culvert 2005).

The prognosis for individuals with mild to moderate hyperglycemia is good, based on treatment. Severe hyperglycemia, with glucose levels in the blood serum in the range of 800 mg/dL, can lead to cerebral edema, coma, and death if not treated promptly (Culvert 2005).