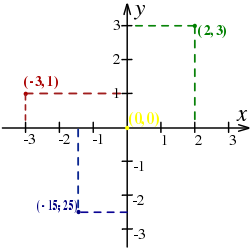 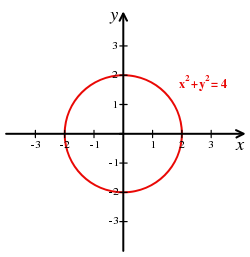 Fig. 2 - Cartesian coordinate system with the circle of radius 2 centered at the origin marked in red. The equation of the circle is x² + y² = 4.

Using the Cartesian coordinate system, geometric shapes (such as curves) can be described by algebraic equations, namely equations satisfied by the coordinates of the points lying on the shape. For example, a circle of radius 2 may be described by the equation x² + y² = 4 (see Figure 2).

Cartesian means relating to the French mathematician and philosopher René Descartes (Latin: Cartesius), who, among other things, worked to merge algebra and Euclidean geometry. This work was influential in the development of analytic geometry, calculus, and cartography.

The idea of this system was developed in 1637 in two writings by Descartes. In part two of his Discourse on Method, Descartes introduces the new idea of specifying the position of a point or object on a surface, using two intersecting axes as measuring guides. In La Géométrie, he further explores the above-mentioned concepts. 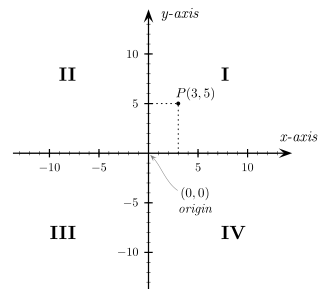 Fig. 3 - The four quadrants of a Cartesian coordinate system. The arrows on the axes indicate that they extend forever in their respective directions (i.e. infinitely).

The point of intersection, where the axes meet, is called the origin normally labeled O. The x and y axes define a plane that is referred to as the xy plane. Given each axis, choose a unit length, and mark off each unit along the axis, forming a grid. To specify a particular point on a two dimensional coordinate system, indicate the x unit first (abscissa), followed by the y unit (ordinate) in the form (x,y), an ordered pair.

An example of a point P on the system is indicated in Figure 3, using the coordinate (3,5). 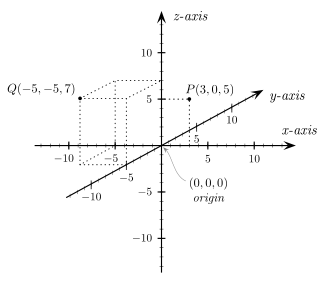 Fig. 4 - Three dimensional Cartesian coordinate system with y-axis pointing away from the observer. 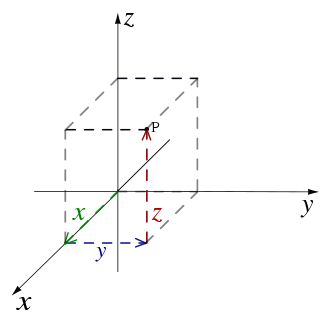 Fig. 5 - Three dimensional Cartesian coordinate system with the x-axis pointing towards the observer.

The three Cartesian axes defining the system are perpendicular to each other. The relevant coordinates are of the form (x,y,z). As an example, figure 4 shows two points plotted in a three-dimensional Cartesian coordinate system: P(3,0,5) and Q(−5,−5,7). The axes are depicted in a "world-coordinates" orientation with the z-axis pointing up.

The x-, y-, and z-coordinates of a point can also be taken as the distances from the yz-plane, xz-plane, and xy-plane respectively. Figure 5 shows the distances of point P from the planes.

The xy-, yz-, and xz-planes divide the three-dimensional space into eight subdivisions known as octants, similar to the quadrants of 2D space. While conventions have been established for the labelling of the four quadrants of the x-y plane, only the first octant of three dimensional space is labelled. It contains all of the points whose x, y, and z coordinates are positive.

The z-coordinate is also called applicate. 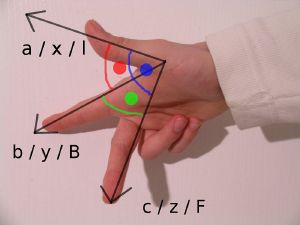 A commonly used mnemonic for defining the positive orientation is the right hand rule. Placing a somewhat closed right hand on the plane with the thumb pointing up, the fingers point from the x-axis to the y-axis, in a positively oriented coordinate system. 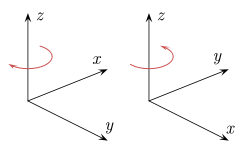 Fig. 7 - The left-handed orientation is shown on the left, and the right-handed on the right. 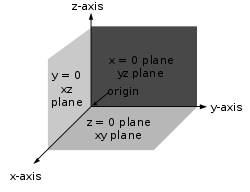 Once the x- and y-axes are specified, they determine the line along which the z-axis should lie, but there are two possible directions on this line. The two possible coordinate systems which result are called "right-handed" and "left-handed." The standard orientation, where the xy-plane is horizontal and the z-axis points up (and the x- and the y-axis form a positively oriented two-dimensional coordinate system in the xy-plane if observed from above the xy-plane) is called right-handed or positive.

The name derives from the right-hand rule. If the index finger of the right hand is pointed forward, the middle finger bent inward at a right angle to it, and the thumb placed at a right angle to both, the three fingers indicate the relative directions of the x-, y-, and z-axes in a right-handed system. The thumb indicates the x-axis, the index finger the y-axis and the middle finger the z-axis. Conversely, if the same is done with the left hand, a left-handed system results.

Figure 7 is an attempt at depicting a left- and a right-handed coordinate system. Because a three-dimensional object is represented on the two-dimensional screen, distortion and ambiguity result. The axis pointing downward (and to the right) is also meant to point towards the observer, whereas the "middle" axis is meant to point away from the observer. The red circle is parallel to the horizontal xy-plane and indicates rotation from the x-axis to the y-axis (in both cases). Hence the red arrow passes in front of the z-axis.

The above discussion applies to Cartesian coordinate systems in mathematics, where it is common to not use any units of measurement. In physics, it is important to note that a dimension is simply a measure of something, and that, for each class of features to be measured, another dimension can be added. Attachment to visualizing the dimensions precludes understanding the many different dimensions that can be measured (time, mass, color, cost, etc.). Multi-dimensional objects can be calculated and manipulated algebraically.

Representing a vector with Cartesian notation

. Using Cartesian coordinates, the vector from the origin to the point

are unit vectors that point the same direction as the

This notation is typically referred to as Cartesian notation. The unit vectors

are called the versors of the coordinate system, and represent an example of standard basis.