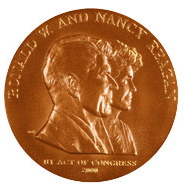 A Congressional Gold Medal is an award bestowed by the United States Congress and is, along with the Presidential Medal of Freedom, the highest civilian award in the United States. The decoration is awarded to an individual who performs an outstanding deed or act of service to the security, prosperity, and national interest of the United States. American citizenship is not a requirement.

Per committee rules, legislation bestowing a Congressional Gold Medal upon a recipient must be co-sponsored by two-thirds of the membership of both the House of Representatives and the Senate before their respective committees will consider it.

Mint engravers prepare a series of sketches of possible designs for consideration and comment by the Commission of Fine Arts and subsequently the Secretary of the Treasury, who makes the final decision on the medal’s design. Once the Secretary of the Treasury, in consultation with the honoree’s family, has made a selection, the design is sculptured, a dye is made, and the medal is struck at the Philadelphia Mint.[1]

In 1777, Major General Horatio Gates was recognized for his “brave and successful efforts” in bringing about the surrender of the British Army at Saratoga. Two years later, a similar honor was bestowed upon Major General Anthony Wayne in 1779 for his courageous assault on the British at Stony Point, New York. A gold medal was also given to Major Henry Lee in commemoration of the skill and bravery he exhibited against the British at Paulus Hook, New Jersey. Brigadier General Daniel Morgan and Major General Nathaniel Greene were praised for their gallant efforts in South Carolina during 1781. Six years later, John Paul Jones was similarly honored for his "valor and brilliant services" in capturing the Serapis.[1]

While the Continental Congress was prompt in approving each of these medals, those responsible for carrying out the wishes of Congress were not so prompt. Because of its close ties with France, Congress turned to Paris for advice and assistance in having the medals struck. Unfortunately, Congress’ preoccupation with the American Revolution, together with the lengthy and complicated procedures which had to be followed in Paris, produced long delays. Thomas Jefferson was not able to present Washington his gold medal until March 21, 1790, some 14 years after it had been approved. At the same time, Washington received a mahogany box containing a number of other gold medals ordered by Congress. Soon thereafter, these medals were transmitted by the former President to the various recipients. The gold medal conferred upon Major Henry “Light Horse Harry” Lee was the first to be struck in this country.[1]

Since the American Revolution Congress has commissioned gold medals as its highest expression of national appreciation for distinguished achievements and contributions. Each medal honors a particular individual, institution, or event.

Following the ratification of the United States Constitution, the first gold medal authorized by Congress was given to Captain Thomas Truxtun in 1800 for action between the United States frigate Constellation and the French ship La Vengeance. In 1805, Commodore Edward Preble received a gold medal for gallantry and good conduct during the War with Tripoli.

Subsequently, Congress commissioned 27 gold medals for notable victories and achievements in the War of 1812. This was more than four times as many as it had given during the American Revolution.

Gold medals would continue to be awarded for military achievements until the American Civil War, but with far less frequency.

The gold medal Congress approved on February 22, 1816, honoring Captain James Biddle’s "gallantry" in capturing the British sloop-of-war Penguin was the final naval award of this character awarded by Congress until World War II. 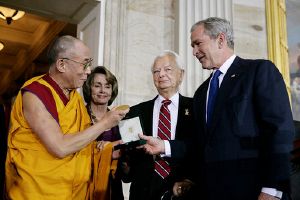 In 1858, Dr. Frederick A. Rose, an assistant-surgeon in the British Navy, was recognized for his kindness and humanity to sick American seamen aboard the U.S. steamer Susquehannah, whose crew had been stricken with yellow fever. With this action Congress broke with its tradition of only honoring heroism associated with the actions of American military or naval personnel.[1]

The scope of those who can receive the medal now includes actors, authors, entertainers, musicians, pioneers in aeronautics and space, explorers, lifesavers, notables in science and medicine, athletes, humanitarians, public servants, and foreign recipients.[2]

In 1861 Congress established the first permanent American military decoration with creation of the Medal of Honor. This award marked the beginning of a formalized policy by the United States of awarding military decorations. Although this medal was also to be presented in the name of the Congress of the United States and today is often referred to as the Congressional Medal of Honor, the regulations for awarding the Medal of Honor have from the beginning been the responsibility of the armed services. There is a clear distinction between the Medal of Honor, which is a military award, and Congressional Gold Medals, which are authorized by Congress to honor particular individuals and events.

During the American Civil War, more than 1500 Americans were awarded the Medal of Honor, but only one individual—Ulysses S. Grant—received a Congressional Gold Medal. Thirty-five years were to pass before Congress would bestow the Gold Medal on another American military leader.[1]

After a Congressional Gold Medal bill has been approved by both houses of Congress and signed into law by the President, officials of the U.S. Mint meet with the sponsors of the legislation and members of the honoree's family to discuss possible designs for the medal.

A series of designs and sketches are then produced for consideration and comment by the [[Commission of Fine Arts]], and subsequently the Secretary of the Treasury, who makes the final decision on the design.

Once a design is agreed upon and approved the design is sculpted, a die is made and the medal is struck at the Philadelphia Mint.