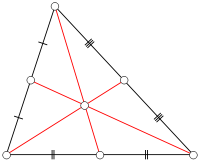 The center of mass of a triangle is located at the centroid of the triangle. 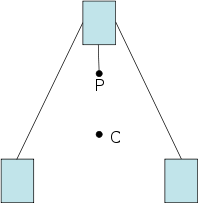 Diagram of an educational toy that balances on a point: the CM (C) settles below its support (P). Any object whose CM is below the fulcrum will not topple.

The center of mass of a body does not always coincide with its intuitive geometric center. For example, engineers try to design a sport car such that its center of gravity is as low as possible, to make the car handle better. When a high jumper performs a "Fosbury Flop," it involves bending the body in such a way that the jumper can clear the bar while his or her center of mass does not.[1] Also, an object will not topple as long as its center of mass lies within its base of support.

The so-called "center of gravity frame" (a less-preferred term for the center of momentum frame) is an inertial frame in which the center of mass of the system is at rest.

The concept of center of gravity was first introduced by the ancient Greek mathematician, physicist, and engineer Archimedes of Syracuse. Archimedes showed that the torque exerted on a lever by weights resting at various points along the lever is the same as what it would be if all of the weights were moved to a single point—their center of gravity. In work on floating bodies he demonstrated that the orientation of a floating object is the one that makes its center of gravity as low as possible. He developed mathematical techniques for finding the centers of gravity of objects of uniform density of various well-defined shapes, in particular a triangle, a hemisphere, and a frustum of a circular paraboloid.

In the Middle Ages, theories on the center of gravity were further developed by Abū Rayhān al-Bīrūnī, al-Razi (Latinized as Rhazes), Omar Khayyám, and al-Khazini.[2]

The center of mass

of a system of particles is defined as the average of their positions,

, weighted by their masses,

For a continuous distribution with mass density

, the sum becomes an integral:

If an object has uniform density, then its center of mass is the same as the centroid of its shape.

For any system with no external forces, the center of mass moves with constant velocity. This applies for all systems with classical internal forces, including magnetic fields, electric fields, chemical reactions, and so on. More formally, this is true for any internal forces that satisfy the weak form of Newton's Third Law.

The total momentum for any system of particles is given by

An analogue to Newton's Second Law is

Letting the total internal force of the system.

is the total mass of the system and

is a vector yet to be defined, since:

Therefore, it yields a vectorial definition for center of mass in terms of the total forces in the system. This is particularly useful for two-body systems.

Rotation and centers of gravity 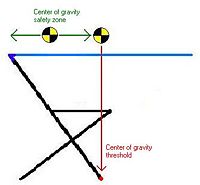 The suspending chair trick makes use of the human body's center of gravity, and the fact that it is surprisingly high.

If the gravitational field acting on a body is not uniform, then the center of mass does not necessarily exhibit these convenient properties concerning gravity. As the situation is put in Feynman's influential textbook The Feynman Lectures on Physics:

Later authors are often less careful, stating that when gravity is not uniform, "the center of gravity" departs from the CM. This usage seems to imply a well-defined "center of gravity" concept for non-uniform fields, but there is no such thing. Symon, in his textbook, Mechanics, shows that the center of gravity of an extended body must always be defined relative to an external point, at which location resides a point mass that is exerting a gravitational force on the object in question. Even worse, as Symon says:

For two extended bodies, no unique centers of gravity can in general be defined, even relative to each other, except in special cases, as when the bodies are far apart, or when one of them is a sphere… The general problem of determining the gravitational forces between bodies is usually best treated by means of the concepts of the field theory of gravitation….

Even when considering tidal forces on planets, it is sufficient to use centers of mass to find the overall motion. In practice, for non-uniform fields, one simply does not speak of a "center of gravity."[3]

The center of mass is an important point on an aircraft, which significantly affects the stability of the aircraft. To ensure the aircraft is safe to fly, it is critical that the center of gravity fall within specified limits. This range varies by aircraft, but as a rule of thumb it is centered about a point one quarter of the way from the wing leading edge to the wing trailing edge (the quarter chord point). If the center of mass is ahead of the forward limit, the aircraft will be less maneuverable, possibly to the point of being unable to rotate for takeoff or flare for landing. If the center of mass is behind the aft limit, the moment arm of the elevator is reduced, which makes it more difficult to recover from a stalled condition. The aircraft will be more maneuverable, but also less stable, and possibly so unstable that it is impossible to fly.

The barycenter (or barycentre; from the Greek βαρύκεντρον) is the point between two objects where they balance each other. In other words, it is the center of gravity where two or more celestial bodies orbit each other. When a moon orbits a planet, or a planet orbits a star, both bodies are actually orbiting around a point that lies outside the center of the greater body. For example, the moon does not orbit the exact center of the earth, instead orbiting a point outside the earth's center (but well below the surface of the Earth) where their respective masses balance each other. The barycenter is one of the foci of the elliptical orbit of each body. This is an important concept in the fields of astronomy, astrophysics, and the like.

In a simple two-body case, r1, the distance from the center of the first body to the barycenter is given by:

The following table sets out some examples from our solar system. Figures are given rounded to three significant figures. The last two columns show R1, the radius of the first (more massive) body, and r1/R1, the ratio of the distance to the barycenter and that radius: A value less than one shows that the barycenter lies inside the first body.

If m1 >> m2—which is true for the Sun and any planet—then the ratio r1/R1 approximates to:

Hence, the barycenter of the Sun-planet system will lie outside the Sun only if:

That is, where the planet is heavy and far from the Sun.

To calculate the actual motion of the Sun, you would need to sum all the influences from all the planets, comets, asteroids, and so on, of the solar system (see n-body problem). If all the planets were aligned on the same side of the Sun, the combined center of mass would lie about 500,000 km above the Sun's surface.

The calculations above are based on the mean distance between the bodies and yield the mean value r1. But all celestial orbits are elliptical, and the distance between the bodies varies between the apses, depending on the eccentricity, e. Hence, the position of the barycenter varies too, and it is possible in some systems for the barycenter to be sometimes inside and sometimes outside the more massive body. This occurs where:

Images here are representative, not simulated.

Locating the center of mass

For an arbitrary 2D physical shape

This method is useful when one wishes to find the center of gravity of a complex planar object with unknown dimensions.

For an L-shaped object

For a composite shape

The shape. It is easily divided into a square, triangle, and circle. Note that the circle will have negative area.

From the List of centroids, we note the coordinates of the individual centroids.

The center of mass of this figure is at a distance of 8.5 units from the left corner of the figure. 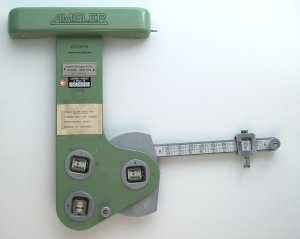 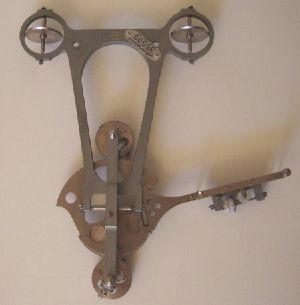 A direct development of the planimeter known as an integraph, or integerometer, can be used to establish the position of the center of mass of an irregular shape. A better term is probably moment planimeter. This method can be applied to a shape with an irregular, smooth, or complex boundary where other methods are too difficult. It was regularly used by ship builders to ensure the ship would not capsize.[4]