When a celestial object is in an elliptical orbit around another body, an apsis (plural apsides) is a point on the orbit at greatest or least distance from the center of attraction, which is generally the center of mass of the system. The point of closest approach is called the periapsis or pericenter, and the point of farthest excursion is called the apoapsis, apapsis, or apocenter. (In technical usage, the words periapsis and apoapsis are preferred over pericenter and apocenter.) A straight line drawn through the periapsis and apoapsis is called the line of apsides, corresponding to the major axis of the ellipse, that is, the line through the longest part of the ellipse.

Derivative terms are used to identify the body being orbited. The most common are perigee and apogee, which refer to points on orbits around the Earth, and perihelion and aphelion, which refer to points on orbits around the Sun. The terms perihelion and aphelion are commonly used for orbits of planets in the Solar System, but the same terms are occasionally employed when referring to the nearest and farthest distances of a comet from the Sun. During the Apollo program, the terms pericynthion and apocynthion were used when referring to the spacecraft's orbit around the Moon.

As noted above, "-gee" and "-helion" are used for orbits of objects around the Earth and the Sun, respectively. Various additional terms have been coined for orbits around other celestial objects. For example, "-astron" and "-galacticon" are used when the body being orbited is a star or a galaxy, respectively. For orbits around a black hole, physicist Geoffrey A. Landis introduced the terms perimelasma and apomelasma (from the Greek root) in 1998; but later (in 2002), the terms perinigricon and aponigricon (from the Latin) appeared in the scientific literature.

Various terms are listed in the table below. Although some of them are used occasionally, the term -saturnium has rarely been used in the last 50 years. Also, the -gee form is commonly (albeit incorrectly) used as a generic term for "closest or farthest point from a planet," instead of specifically applying to orbits around the Earth.

Given that "peri" and "apo" are derived from Greek, it is considered by some purists[3] more correct to use the Greek form for the body, giving forms such as "-zene" for Jupiter and "-krone" for Saturn. The daunting prospect of having to maintain a different word for every orbitable body in the solar system (and beyond) is the main reason why the generic '-apsis' has become the almost universal norm.

The Earth is closest to the Sun in early January and farthest in early July. The relation between perihelion, aphelion and the Earth's seasons changes over a 21,000 year cycle. This anomalistic precession contributes to periodic climate change (related to what are known as Milankovitch cycles).

The day and hour of these events for recent and upcoming years are noted in the table below.[4] 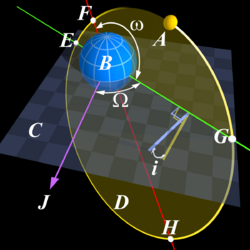 A diagram of Keplerian orbital elements. F Periaps, H Apoapsis and the red line between them is the line of apsides.

The following mathematical formulae characterize the periapsis and apoapsis of an orbit:

while, in accordance with Kepler's laws of planetary motion (conservation of angular momentum) and the conservation of energy, these quantities are constant for a given orbit:

Note that for conversion from heights above the surface to distances between an orbit and its primary, the radius of the central body has to be added, and conversely.

. The geometric mean of the two distances is the length of the semi-minor axis

The geometric mean of the two limiting speeds is

, the speed corresponding to a kinetic energy which, at any position of the orbit, added to the existing kinetic energy, would allow the orbiting body to escape (the square root of the product of the two speeds is the local escape velocity).