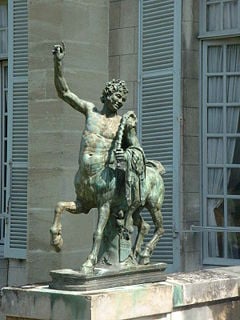 In Greek mythology, the centaurs (Greek: Κένταυροι) are a race of mythical creatures that are half human and half horse. In early Attic vase-paintings, they are depicted as the head and torso of a man with his waist joined to the horse's withers, where the horse's neck would be. This human and animal combination has led many writers to treat them as "liminal" beings, caught between the two natures of feral animalism and cogent humanity.

While generally associated with barbarous behavior, notorious for being overly indulgent drinkers, given to violence when intoxicated, and generally uncultured, even in Greek mythology a well-known centaur (Chiron) was intelligent, civilized, and kind. Thus, at least in some writers' hopes, and noticeably more so in modern fantasy writings, the centaur can overcome his baser instincts and rise to the level of enlightened humanity, symbolizing the raising of human consciousness to the level of maturity where living for the sake of others triumphs over self-interest.

The etymology of the word centaur from the Greek word kentauros could be understood as ken–tauros, which means "piercing bull." It is also possible that this word in fact comes from the Mesopotamian word for Centaurus, the constellation that in Mesopotamian culture depicted an epic battle of gods. The Greeks later renamed the constellation for its depiction of a man riding a horse, the significance of which has been suggested as a collective but vague memory of horse riders from Thessaly that at one time invaded Greece.[1] 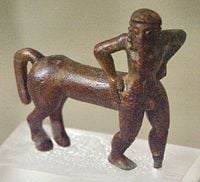 Centaur from Crete
Did you know?
The idea of centaurs may have arisen when non-riding cultures first saw nomads mounted on horses.

The most common theory holds that the idea of centaurs came from the first reaction of a non-riding culture to nomads who were mounted on horses. This theory suggests that such riders would appear as half-man, half-animal. Bernal Díaz del Castillo reported that the Aztecs had this misapprehension about Spanish cavalrymen.[2]

Horse taming and horseback culture evolved first in the southern steppe grasslands of Central Asia, perhaps approximately in modern Kazakhstan. In the Minoan Aegean world, the Lapith tribe of Thessaly, who were the kinsmen of the Centaurs in myth, is described as the inventors of horseback riding by Greek writers. The Thessalian tribes also claimed their horse breeds were descended from the centaurs.

Anthropologist and writer Robert Graves speculated that the centaurs of Greek myth were a dimly-remembered, pre-Hellenic fraternal earth cult who had the horse as a totem.

Of the various classical Greek authors who mentioned centaurs, Pindar was the first who describes what is undoubtedly a combined monster. Previous authors such as Homer only used words such as Pheres (beasts) that could also mean ordinary savage men riding ordinary horses. However, contemporaneous representations of hybrid centaurs can be found in archaic Greek art. 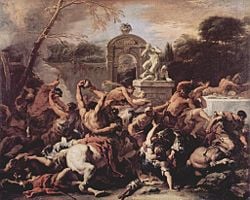 Painting by Sebastiano Ricci of Centaurs at the marriage of Pirithous, king of the Lapithae

According to Greek mythology, the centaurs descended from Centaurus, who mated with the Magnesian mares. Centaurus was the son of either Ixion and Nephele (the cloud made in the image of Hera) or of Apollo and Stilbe, daughter of the river god Peneus. In the latter version of the story his twin brother was Lapithus, ancestor of the Lapiths, thus making the two warring peoples cousins.

The most popular myth featuring centaurs is the story of the wedding of Hippodamia, and Pirithous, king of the Lapithae. Kin to Hippodamia, the centaurs attended the wedding, but became so drunk and riotous at the ceremony that they attempted to ride off with the bride and other women. A large and bloody battle ensued, and despite their size and strength, the centaurs were defeated and driven away.[3] The strife among these cousins is interpreted as similar to the defeat of the Titans by the Olympian gods—the contests with the centaurs typify the struggle between civilization and barbarism. Other myths include the story of Atalanta, a girl raised in the wild by animals, who slew two centaurs who threatened her, thanks to her excellent archery skills. 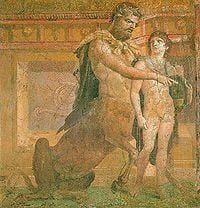 The most famous centaur was Chiron, an old, wise, and legendarily gifted centaur. He is featured in many stories, being credited with raising Aesculapis the physician and Actaeon the hunter, as well as teaching the greatest of Greek warriors, Achilles. There are two conflicting stories of his death. The first involves an accidental injury caused by Hercules that was so painful but not mortal that Zeus allowed Chiron to die with dignity. The other story involves Chiron's willful sacrificing of his life in order to save Prometheus from being punished by Zeus.[4] Ironically, Chiron, the master of the healing arts, could not heal himself, so he willingly gave up his immortality and was placed in the sky, for the Greeks as the constellation Sagittarius, and in modern times represented by the constellation of the Southern Hemisphere, Centaurus. 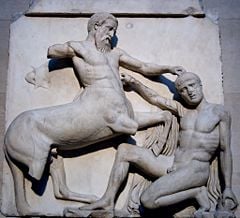 Lapith fighting a centaur from the Parthenon

Vignettes of the battle between Lapiths and Centaurs were sculpted in bas-relief on the frieze of the Parthenon.

The mythological episode of the centaur Nessus carrying off Deianira, the bride of Heracles, provided Giambologna (1529–1608), a Flemish sculptor whose career was spent in Italy, a splendid opportunity to devise compositions with two forms in violent interaction. He made several versions of Nessus carrying off Deianira, represented by examples in the Louvre, the Grünes Gewölbe, Dresden, the Frick Collection, New York City, and the Huntington Library, San Marino, California. His followers, like Adriaen de Vries and Pietro Tacca, continued to make countless repetitions of the subject. When Carrier-Belleuse tackled the same play of forms in the nineteenth century, he titled it Abduction of Hippodameia.

Centaurs have appeared many times and in many places in literature and popular fiction. One example is the Centaur Inn featured in Shakespeare's The Comedy of Errors. Considered dangerous, even demonic in the medieval period, the centaur experienced somewhat of a rebirth in more recent times. Centaurs are featured in C. S. Lewis' The Chronicles of Narnia, and numerous fantasy novels by a variety of twentieth-century authors. The centaur still plays the role of bringing together the animal and the human, able to talk, think, and reason like human beings, while at the same time having the strength and physical abilities of a strong and swift animal. Centaurs in modern literature seem to have overcome their barbarism of old, however, and, while still a dangerous enemy to humankind, are more often portrayed as supporters on the side of goodness.