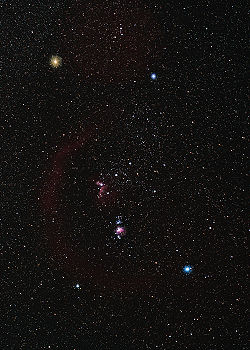 Orion is a remarkable constellation, visible from all points on the globe at one time or other during the year. It contains a pattern identified as the form of a hunter.

The formal astronomical definition of constellation is slightly different. A group of stars that can be connected to form a figure or a picture is called an asterism, whereas a constellation is a defined area on the sky. The International Astronomical Union (IAU) divides the sky into 88 official constellations[1] with exact boundaries, so that every direction or place in the sky belongs within one constellation. They are mostly based upon the constellations of the ancient Greek tradition, passed down through the Middle Ages, and they contain the signs of the zodiac. The Sun appears to pass through the 12 constellations of the zodiac (plus Ophiuchus), and ancient Greek astronomers believed they had some special significance.

Some well-known constellations contain striking and familiar patterns of bright stars. Examples are Orion (outlining the figure of a hunter), Leo (outlining the form of a lion), Scorpius (outlining a scorpion), and Crux (a cross shape).

A star pattern may be widely known but may not be recognized by the International Astronomical Union. Such a pattern of stars is called an asterism. An example is the grouping called the Big Dipper (North America) or the Plough (United Kingdom).

The stars in a constellation, or asterism, rarely have any astrophysical relationship to each other; they just happen to appear close together in the sky as viewed from Earth and typically lie many light-years apart in space. However, one exception to this is the Ursa Major moving group. 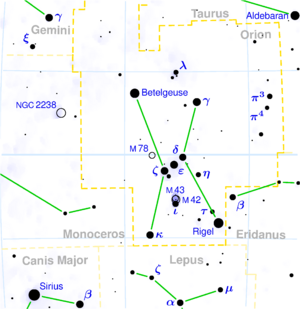 The constellation of Orion is the area outlined in the dashed yellow line.

Very early in human history, people began clumping various stars together in connect-the-dots, stick-figure patterns. As noted above, the grouping of stars into constellations was mostly arbitrary, although some obvious groups were repeated, such as Orion and Scorpius. Historically, without an "official" list, there was really no difference between a constellation and an asterism. Anyone could arrange and name a grouping that might or might not be generally accepted. Nonetheless, some modern, well known constellations go back at least as far as the Sumerians.

Our current list is based on that of the Greco-Roman astronomer, Claudius Ptolemy of Alexandria (about 85–165). His list of 48 constellations was accepted as the standard for 1800 years. As constellations were considered to be composed only of the stars that constituted the figure, it was always possible to use the leftover, non-figure ("amorphic") stars to create and squeeze in a new grouping among the established constellations.

Two astronomers particularly known for attempting to expand Ptolemy's catalog were Johann Bayer (1572–1625) and Nicolas Louis de Lacaille (1713–1762). Bayer listed a dozen figures that had been suggested since Ptolemy's day; Lacaille created new groups, mostly for the area near the South Celestial Pole, unobserved by the ancients. Many of their proposed constellations have been accepted, the rest remaining asterisms, mostly obsolete. Clarification was necessary to determine which groupings are constellations and which stars belonged to them.

This situation was finally regularized in 1930, when the International Astronomical Union divided the sky into 88 official constellations with precise boundaries. Any other grouping is an asterism.

The constellation boundaries were drawn up by Eugène Delporte in 1930, and he drew them along vertical and horizontal lines of right ascension and declination. However, he did so for the epoch B1875.0, the era when Benjamin A. Gould made the proposal on which Delporte based his work. The consequence of the early date is that, due to precession of the equinoxes, the borders on a modern star map (such as for epoch J2000) are already somewhat skewed and no longer perfectly vertical or horizontal. This skew will increase over the years and centuries to come.

The first ancient Greek works that dealt with the constellations were books of star myths. The oldest of these was a poem composed by Hesiod around the eighth century B.C.E., but only fragments of this work survive. The Greeks knew that these constellations were based on superstition. The most complete existing works dealing with the mythical origins of the constellations are by the Hellenistic writer known as pseudo-Eratosthenes and an early Roman writer styled pseudo-Hyginus.

In Hindu (Vedic) astronomy, the term rashi means constellation. There are twelve rashis along the ecliptic, corresponding directly to the twelve western star signs. These are, however, divided into 27 Nakshatras, or lunar houses.

The "Emu in the sky," a "constellation" defined by dark clouds rather than the stars. A western interpretation would recognize the Crux or Southern Cross, on the left Scorpius. The head of the emu is the Coalsack.

Members of the Inca civilization identified various dark areas in the Milky Way as animals, and associated their appearance with the seasonal rains. These areas are commonly referred to by modern researchers as dark cloud constellations[2] or dark nebulae. Australian Aboriginal astronomy also used dark nebulae in some constellations, the most famous being the "emu in the sky" whose head is formed by the coalsack.

All modern constellation names are Latin proper names or words, and some stars are named using the genitive (or sometimes the ablative) of the constellation in which they are found. These are formed by using the usual rules of Latin grammar, and for those unfamiliar with that language the form of the genitive is sometimes unpredictable and must be memorized.

Some examples are as follows: