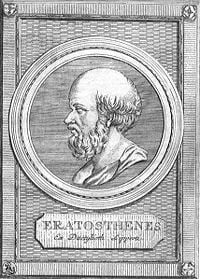 Eratosthenes (Greek Ἐρατοσθένης; 276 B.C.E. – 194 B.C.E.) was a Greek mathematician, geographer and astronomer. His contemporaries nicknamed him "beta" (Greek for "number two") because he supposedly proved himself to be the second in the ancient Mediterranean world in many fields. He was the first to use the word “geography” ("writing about the earth" in Greek) as the title of a treatise about the world. Geography also introduced the climatic concepts of torrid, temperate, and frigid zones.

Eratosthenes was noted for devising a system of latitude and longitude for the maps he created, and was the first person known to have calculated the circumference of the Earth, using trigonometry and knowledge of the angle of elevation of the Sun at noon in Alexandria and Syene (now Aswan, Egypt). He calculated the earth’s circumference as 39,690 kilometers, an error of less than one percent (the actual distance is 40,008 kilometers). His calculation was accepted by scholars through the Middle Ages.

Eratosthenes was born around 276 B.C.E. in Cyrene (in modern-day Libya), but lived and worked in Alexandria, capital of Ptolemaic Egypt. Eratosthenes studied at Alexandria and for some years in Athens. In 236 B.C.E. he was appointed by Ptolemy III Euergetes I as librarian of the Alexandrian library, succeeding the first librarian, Zenodotos, in that post. While serving as head librarian, Eratosthenes wrote a comprehensive treatise about the world, called Geography. This was the first use of the word “geography,” which literally means "writing about the earth" in Greek. Geography also introduced the climatic concepts of torrid, temperate, and frigid zones.

Eratosthenes made several important contributions to mathematics and science, and was a good friend to Archimedes. Around 255 B.C.E. he invented the armillary sphere, which was widely used until the invention of the orrery in the eighteenth century. In 194 B.C.E. he became blind, and a year later he supposedly starved himself to death. He never married and was reputedly known for his haughty character.

Measurement of the Earth

Eratosthenes is credited by Cleomedes in On the Circular Motions of the Celestial Bodies with having calculated the Earth's circumference around 240 B.C.E., using trigonometry and knowledge of the angle of elevation of the Sun at noon in Alexandria and Syene (now Aswan, Egypt). 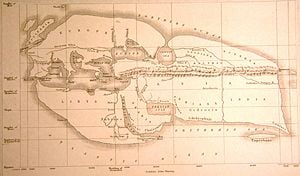 Eratosthenes heard of a deep well at Syene (near the Tropic of Cancer and modern Aswan) where sunlight only struck the bottom of the well on the summer solstice, and determined that he could discover the circumference of the earth. (Greek scholars knew that the earth was a a sphere).

He knew that on the summer solstice at local noon in the town of Syene on the Tropic of Cancer, the sun would appear at the zenith, directly overhead. He then measured the angle of the shadow in Alexandria on the solstice and found it to be 7°12' south. Assuming that the sun’s rays were parallel, Eratosthenes knew from geometry that that the measured angle equaled the measurement of the angle formed at the earth’s center by two lines passing through Alexandria and Syene. Assuming that Alexandria was due north of Syene he concluded that the distance from Alexandria to Syene must be 7.2/360 of the total circumference of the Earth. The distance between the cities was known from camel caravans to be about 5000 stadia, approximately 800 km. Eratosthenes established a final value of 700 stadia per degree, which implies a circumference of 252,000 stadia. The exact size of the stadion he used is no longer known (the common Attic stadion was about 185 m), but it is generally believed that the circumference calculated by Eratosthenes corresponds to 39,690 kilometers. The estimate is over 99 percent of the actual distance of 40,008 km.

Although Eratosthenes' method was well founded, the accuracy of his calculation was inherently limited. The accuracy of Eratosthenes' measurement would have been reduced by the fact that Syene is not precisely on the Tropic of Cancer, is not directly south of Alexandria, and that the Sun appears as a disk located at a finite distance from the Earth instead of as a point source of light at an infinite distance. There are other possible sources of experimental error; in antiquity, angles could only be measured to within about a quarter of a degree, and overland distance measurements were even less reliable. The accuracy of the result of Eratosthenes' calculation is surprising.

Eratosthenes' experiment was highly regarded at the time, and his estimate of the Earth’s size was accepted for hundreds of years afterwards. About 150 years later, the Greek geographer Posidonius thought Eratosthenes' circumference was too large, and used a similar method to calculated the circumference as 18,000 miles, 7,000 miles too short. During the Middle Ages, most scholars accepted Eratosthenes' circumference, though Christopher Columbus used Posidonius' shorter measurement to convince his supporters that he could quickly reach Asia by sailing west from Europe.

Eratosthenes' other contributions include:

Eusebius of Caesarea in his Preparation for the Gospel|Praeparatio Evangelica includes a brief chapter of three sentences on celestial distances (Book XV, Chapter 53). He states simply that Eratosthenes found the distance to the sun to be "σταδίων μυριάδας τετρακοσίας και οκτωκισμυρίας" (literally "of stadia myriads 400 and 80000") and the distance to the moon to be 780,000 stadia. The expression for the distance to the sun has been translated either as 4,080,000 stadia (1903 translation by E. H. Gifford), or as 804,000,000 stadia (edition of Edouard des Places, dated 1974-1991). The meaning depends on whether Eusebius meant 400 myriad plus 80000 or "400 and 80000" myriad.

This testimony of Eusebius is dismissed by the scholarly Dictionary of Scientific Biography. The distance Eusebius quotes for the moon is much too low (about 144,000 km); Eratosthenes should have been able to be more accurate than this since he knew the size of the earth and Aristarchos of Samos had already found the ratio of the moon's distance to the size of the earth. But if what Eusebius wrote was pure fiction, then it is difficult to explain the fact that, using the Greek stadium of 185 meters, the figure of 804 million stadia that he quotes for the distance to the sun comes to 149 million kilometers. The difference between this and the modern accepted value is less than one percent.