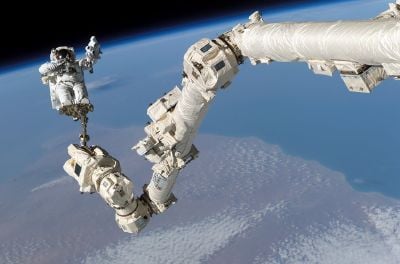 The Canadarm2 robotic manipulator on the International Space Station is operated by controlling the angles of its joints. Calculating the final position of the astronaut at the end of the arm requires repeated use of the trigonometric functions of those angles.

Trigonometry (from Greek Τριγωνομετρία "tri = three" + "gon = angle" + "metr[y] = to measure") is a branch of mathematics that deals with triangles, particularly those plane triangles in which one angle has 90 degrees (right triangles). Trigonometry deals with relationships between the sides and the angles of triangles and with the trigonometric functions, which describe those relationships.

Trigonometry has applications in both pure mathematics and in applied mathematics, where it is essential in many branches of science and technology. It is usually taught in secondary schools either as a separate course or as part of a precalculus course. Trigonometry is informally called "trig" or "trigo."

A branch of trigonometry, called spherical trigonometry, studies triangles on spheres, and is important in astronomy and navigation. 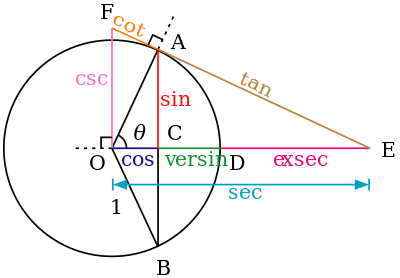 All of the trigonometric functions of an angle θ can be constructed geometrically in terms of a unit circle centered at O.

Trigonometry was developed for use in sailing as a navigation method used with astronomy.[1] The origins of trigonometry can be traced to the civilizations of ancient Egypt, Mesopotamia and the Indus Valley (India), more than 4000 years ago. The common practice of measuring angles in degrees, minutes and seconds comes from the Babylonian's base sixty system of numeration.

The ancient Sinhalese in Sri Lanka, when constructing reservoirs in the Anuradhapura kingdom, used trigonometry to calculate the gradient of the water flow. Archeological research also provides evidence of trigonometry used in other unique hydrological structures dating back to 4 B.C.E.

The Indian mathematician Aryabhata in 499, gave tables of half chords which are now known as sine tables, along with cosine tables. He used zya for sine, kotizya for cosine, and otkram zya for inverse sine, and also introduced the versine. Another Indian mathematician, Brahmagupta in 628, used an interpolation formula to compute values of sines, up to the second order of the Newton-Stirling interpolation formula.

In the tenth century, the Persian mathematician and astronomer Abul Wáfa introduced the tangent function and improved methods of calculating trigonometry tables. He established the angle addition identities, for example, sin (a + b), and discovered the sine formula for spherical geometry:

Also in the late tenth and early eleventh centuries, the Egyptian astronomer Ibn Yunus performed many careful trigonometric calculations and demonstrated the formula

and found a positive root of this cubic by considering the intersection of a rectangular hyperbola and a circle. An approximate numerical solution was then found by interpolation in trigonometric tables.

Detailed methods for constructing a table of sines for any angle were given by the Indian mathematician Bhaskara in 1150, along with some sine and cosine formulae. Bhaskara also developed spherical trigonometry.

In the fourteenth century, Persian mathematician al-Kashi and Timurid mathematician Ulugh Beg (grandson of Timur) produced tables of trigonometric functions as part of their studies of astronomy.

The mathematician Bartholemaeus Pitiscus published an influential work on trigonometry in 1595 which may have coined the word "trigonometry" itself. 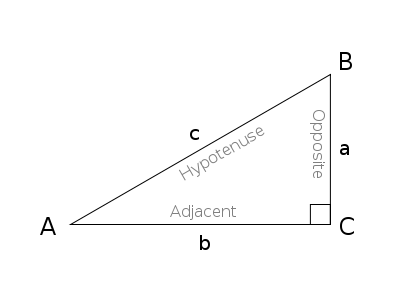 If one angle of a triangle is 90 degrees and one of the other angles is known, the third is thereby fixed, because the three angles of any triangle add up to 180 degrees. The two acute angles therefore add up to 90 degrees: They are complementary angles. The shape of a right triangle is completely determined, up to similarity, by the angles. This means that once one of the other angles is known, the ratios of the various sides are always the same regardless of the overall size of the triangle. These ratios are given by the following trigonometric functions of the known angle A, where a, b, and c refer to the lengths of the sides in the accompanying figure:

With these functions one can answer virtually all questions about arbitrary triangles by using the law of sines and the law of cosines. These laws can be used to compute the remaining angles and sides of any triangle as soon as two sides and an angle or two angles and a side or three sides are known. These laws are useful in all branches of geometry, since every polygon may be described as a finite combination of triangles. 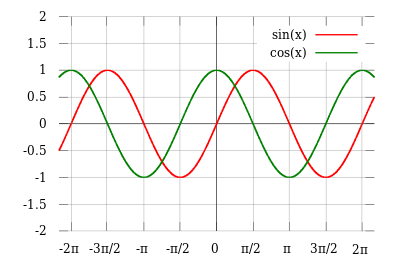 Graphs of the functions sin(x) and cos(x), where the angle x is measured in radians.

The above definitions apply to angles between 0 and 90 degrees (0 and π/2 radians) only. Using the unit circle, one can extend them to all positive and negative arguments (see trigonometric function). The trigonometric functions are periodic, with a period of 360 degrees or 2π radians, except for the tangent and the cotangent, which have π as smallest period. This means their values repeat at those intervals.

Students often use mnemonics to remember facts and relationships in trigonometry. For example, the sine, cosine, and tangent ratios in a right triangle can be remembered by representing them as strings of letters, as in SOH-CAH-TOA.

It is of ethnographic interest to note that the mnemonic TOA-CAH-SOH can be translated in the local Singaporean Hokkien dialect to "big-legged woman," serving as an additional learning aid for students in Singapore.[3]

Another type of mnemonic describes facts in a simple, memorable way, such as "Plus to the right, minus to the left; positive height, negative depth," which refers to trigonometric functions generated by a revolving line.

Trigonometric functions were among the earliest uses for mathematical tables. Such tables were incorporated into mathematics textbooks and students were taught to look up values and how to interpolate between the values listed to get higher accuracy. Slide rules had special scales for trigonometric functions.

Marine sextants like this are used to measure the angle of the sun or stars with respect to the horizon. Using trigonometry and a marine chronometer, the position of the ship can then be determined from several such measurements.

There are an enormous number of applications of trigonometry and trigonometric functions. For instance, the technique of triangulation is used in astronomy to measure the distance to nearby stars, in geography to measure distances between landmarks, and in satellite navigation systems. The sine and cosine functions are fundamental to the theory of periodic functions such as those that describe sound and light waves.

Sine, cosine, and tangent of a sum

is correct, it means it may be either one, depending on the value of A/2. 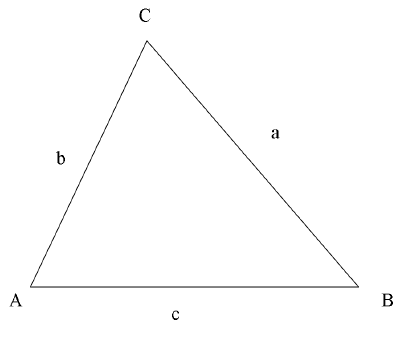 Laws of Sines and Cosines

The law of sines (also know as the "sine rule") for an arbitrary triangle states:

where R is the radius of the circumcircle of the triangle.

The law of cosines (also known as the cosine formula, or the "cos rule") is an extension of the Pythagorean theorem to arbitrary triangles:

The law of tangents: