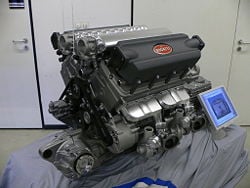 Mechanical Engineering is the engineering discipline that involves application of the principles of physics for the analysis, design, manufacture, and maintenance of mechanical systems. It requires a solid understanding of concepts including mechanics, thermodynamics, and engineering design; as well as solid grounding in physics and math. Mechanical engineers use these principles and others in the design and analysis of automobiles, heating and cooling systems, industrial equipment, and more.

Structures and vehicles of all sizes… 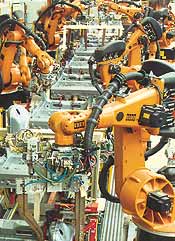 And moving mechanisms, machines, and robots.

The process of engineering design is, as described by Pahl and Beitz, "the intellectual attempt to meet certain demands in the best way possible…. an engineering activity that impinges on nearly every sphere of human life, relies on the discoveries and laws of science, and creates the conditions for applying these laws to the manufacture of useful products" (Pahl and Beitz, 1988).

There are generally four main phases to engineering design:

Basic aspects of design include:

Modern analysis and design processes in mechanical engineering are aided by various computational tools including finite element analysis (FEA), computational fluid dynamics (CFD), computer-aided design (CAD)/computer-aided manufacturing (CAM) and Failure Modes & Effect Analysis (FMEA). These modern processes facilitate engineers to model (create a 3D object in a computer), analyze the quality of design, and so on, before a prototype is created. By this the invention and experimenting with new designs becomes very easy and can be done without any money invested in tooling and prototypes. Simple models can be free and instantaneous, but complicated models, like those describing the mechanics of living tissue, can require years to develop, and the actual computation can be very processor intensive, requiring powerful computers and a lot of cycle time. 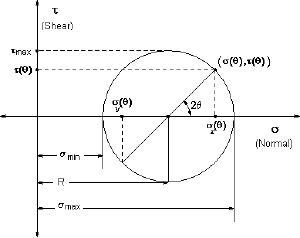 Mohr's circle, a common tool to study stresses in a mechanical element.

Mechanics is used extensively in the design and analysis phases of a project. In vehicle design, statics will be employed in the design of the frame of the vehicle, in order to evaluate where and how the stresses will interact. Dynamics might be used when designing the car's engine, to evaluate the forces on the pistons and cams as the engine cycles. Mechanics of materials will be used to choose appropriate materials for each component of the frame and engine. Fluid mechanics will be used to design a ventilation system for the vehicle (see HVAC), and intake system of the engine.

Failure is defined as when a part does not operate as intended. Some systems, such as the perforated top sections of some plastic bags, are designed to break. If these systems do not break, failure analysis might be employed to determine the cause.

Structural analysis is often used by mechanical engineers after a failure has occurred, or when designing to prevent failure. Engineers may use various books and handbooks such as those published by ASM to aid them in determining the type of failure and possible causes.

Structural analysis may be used the office when designing parts, in the field to analyze failed parts, or in laboratories where parts might undergo controlled failure tests.

Thermodynamic principles are used by mechanical engineers in the fields of heat transfer, thermofluids, and energy conversion and are considered in the design of engines and power plants, heating, ventilation, and air-conditioning (HVAC) systems, heat exchangers, heat sinks, refrigeration, insulation, life support systems, and other applications that require the movement of energy, work, matter, or the conversion of one into any of the others (Moran and Shapiro, 1996). 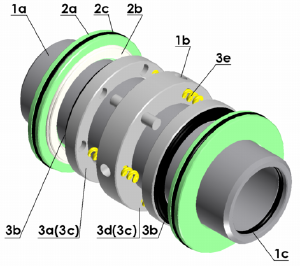 A CAD model of a double mechanical seal.

Drafting or technical drawing is used in nearly every other branch of engineering and architecture. It is the means by which mechanical engineers create instructions for manufacturing parts. A technical drawing can be a computer model or hand-drawn schematic showing all the dimensions necessary to manufacture a part, as well as assembly notes, a list of required materials, and other pertinent information. A U.S. mechanical engineer or skilled worker who creates technical drawings may be referred to as a drafter or draftsman. Drafting has historically been a two-dimensional process, but recent Computer-Aided Designing (CAD) programs have begun to allow the designer to create a part in three dimensions.

Instructions for manufacturing a part must be fed to the necessary machinery, either manually, through programmed instructions, or through the use of a Computer-Aided Manufacturing (CAM) or combined CAD/CAM program. Optionally, an engineer may also have a part manually manufactured using the technical drawings, but this is becoming an increasing rarity, except in the areas of applied spray coatings, finishes, and other processes that cannot economically be done by a machine. Three-dimensional models created using CAD software are also commonly used in Finite element analysis (FEA) and Computational fluid dynamics (CFD).

The following is a list of some cross-disciplinary topics within mechanical engineering. These topics require expertise in other fields of engineering in addition to a mechanical background.

Some Mechanical Engineers go on to pursue a postgraduate degree such as a Master of Engineering, Master of Science, Master of Engineering Management (MEng.Mgt, MEM), a Doctor of Philosophy in Engineering (DEng, PhD) or an Engineer's degree. The Master's and Engineer's degrees may consist of either research, coursework or a mixture of the two. The Doctorate of Philosophy consists of a significant research component and is often viewed as the entry point to academia.[3]

Mechanical engineering programs generally cover the same fundamental subjects. Universities offering accredited programs in mechanical engineering are required to offer several major subjects of study, as determined by the parent nation's accreditation board. This is to ensure a minimum level of competence among graduating engineers and to inspire confidence in the engineering profession as a whole. The specific courses required to graduate, however, may differ from program to program. Universities will often combine multiple subjects into a single class or split a subject into multiple classes, depending on the faculty available and the University's major area(s) of research. Fundamental subjects of mechanical engineering include:

Most mechanical engineering programs also require various research or design projects to gain practical problem-solving experience. Mechanical engineering students usually hold one or more internships while studying, though this is not typically mandated by the university.

In the U.S., to become a licensed Professional Engineer, an Engineer must pass the comprehensive FE (Fundamentals of Engineering) exam, work a given number of years (varies state by state) as an Engineering Intern (EI) or Engineer-in-Training (EIT), pass the Principles and Practice or PE (Practicing Engineer or Professional Engineer) exam. These requirements and steps of this process are set forth by the National Council of Examiners for Engineering and Surveying (NCEES), a national non-profit organization representing all states.

In the UK, current graduates require a MSc, MEng or BEng (Hons) in order to become chartered through the Institution of Mechanical Engineers. In most modern countries, certain engineering tasks, such as the design of bridges, electric power plants, and chemical plants, must be approved by a Professional Engineer or a Chartered Engineer. In the USA and Canada, only a licensed engineer may seal engineering work for public and private clients."[6] This requirement is written into state and provincial legislation, such as Quebec's Engineer Act.[7] In other countries, such as Australia, no such legislation exists; however, practically all certifying bodies maintain a code of ethics independent of legislation that they expect all members to abide by or risk expulsion.[8]

The total number of engineers employed in the U.S. in 2004 was roughly 1.4 million. Of these, 226,000 were mechanical engineers (15.6 percent), second only in size to civil engineers at 237,000 (16.4 percent). The total number of mechanical engineering jobs in 2004 was projected to grow 9 to 17 percent, with average starting salaries being $50,236 with a bachelor's degree, $59,880 with a master's degree, and $68,299 with a doctorate degree. This places mechanical engineering at 8th of 14 among engineering bachelors degrees, 4th of 11 among masters degrees, and 6th of 7 among doctorate degrees in average annual salary.[9] The median annual earning of mechanical engineers in the U.S. workforce is roughly $63,000. This number is highest when working for the government ($72,500), and lowest when doing general purpose machinery manufacturing in the private sector ($55,850).