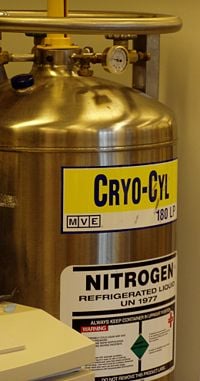 A tank of liquid nitrogen, which is used to supply a cryogenic freezer for storing laboratory samples

Cryogenics is a branch of physics or engineering that studies the production of very low temperatures and the behavior of materials at those temperatures. To achieve extremely low temperatures, liquefied gases such as liquid nitrogen or liquid helium may be used. These materials are called cryogens.

Some cryogens, such as liquid nitrogen, are used for the quick-freezing of foods and vaccines, or for chemical reactions that need to be carried out at low temperatures. Cryogenic oxygen and hydrogen are useful as fuels for powering rockets for space flight. Controlled cryogenic treatment of metals and other materials has increased their strength and resistance to wear.

The word cryogenics literally means "the production of icy cold." The term, however, is mainly used as a synonym for the low-temperature state. It is not well-defined at what point on the temperature scale refrigeration ends and cryogenics begins. A number of researchers define cryogenic temperatures as those ranging from -150 °C (123 K or -238 °F) down to -273.15 °C (0 K or -460 °F). Researchers at the U.S. National Institute of Standards and Technology in Boulder, Colorado have chosen to consider the field of cryogenics as that involving temperatures below -180 °C (93.15 K). This dividing line was chosen because the normal boiling points of the so-called "permanent" gases (such as helium, hydrogen, neon, nitrogen, oxygen, and normal air) lie below -180 °C, while the freon refrigerants, hydrogen sulfide, and other common refrigerants have boiling points above -180 °C.

It is important to distinguish cryogenics (defined above) from other terms that begin with cryo, defined below.

These gases are held in special containers such as Dewar flasks—which are generally about six feet tall (1.8 meters) and three feet (91.5 centimeters) in diameter—or giant tanks, in larger commercial operations. Dewar flasks are named after their inventor, James Dewar, the man who first liquefied hydrogen. Museums typically display smaller vacuum flasks fitted in a protective casing.

Natural gas, which is used as fuel, is often transported in ships in liquefied form, which is known as LNG (liquefied natural gas). At LNG piers, cryogenic transfer pumps are used to transfer the material from LNG carriers to LNG storage tanks.

The field of cryogenics advanced during World War II, when scientists found that metals frozen to low temperatures showed more resistance to wear. Based on the theory of "cryogenic hardening," the commercial cryogenic processing industry was founded in 1966 by Ed Busch. With a background in the heat treating industry, Busch founded a company in Detroit called CryoTech in 1966. Though CryoTech later merged with 300 Below to create the largest and oldest commercial cryogenics company in the world, they originally experimented with the possibility of increasing the life of metal tools to anywhere between 200 to 400 percent of the original life expectancy using cryogenic tempering instead of heat treating.

The theory was based on the knowledge that if metals are heated and cooled to room temperature, they showed some increase in strength, leading to the belief that continuing the cooling would allow for further strength increases. Using liquid nitrogen, CryoTech formulated the first early version of the cryogenic processor. Unfortunately, the results were unstable, as components sometimes experienced thermal shock when cooled too fast. Some components in early tests shattered because of the ultra-low temperatures used. In the late twentieth century, the field improved significantly with the rise of applied research, which coupled microprocessor-based industrial controls to the cryogenic processor, leading to more stable results. Currently, a cryogenic processor is a unit designed to reach ultra-low temperatures (usually around -150 °C) at a slow rate, to prevent thermal shock to the components being treated.

Cryogens, such as liquid nitrogen, are further used for specialty chilling and freezing applications. Some chemical reactions, like those used to produce the active ingredients for the popular statin drugs, must occur at low temperatures of approximately -100 °C. Special cryogenic chemical reactors are used to remove reaction heat and provide a low temperature environment. Also, the freezing of foods and biotechnology products, such as vaccines, requires nitrogen in systems described as "blast freezing" or "immersion freezing."

Cryogenic fuels, mainly oxygen and hydrogen, have been used to power rockets. For example, NASA's workhorse space shuttle uses cryogenic oxygen and hydrogen fuels as its primary means of getting into orbit. So too did all the rockets built for the Soviet space program by Sergei Korolev—leading to a bone of contention between him and rival engine designer Valentin Glushko, who felt that cryogenic fuels were impractical for large-scale rockets such as the ill-fated N-1 rocket.

Russian aircraft manufacturer Tupolev has been conducting research on the Tu-155 airliner, a version of its popular Tu-154, with a cryogenic fuel system. The plane uses a fuel referred to as liquefied natural gas (LNG) and made its first flight in 1989.