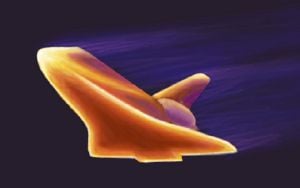 Simulation of the outside of the Space Shuttle as it heats up to over 1,500 °C (2,730 °F) during re-entry into the Earth's atmosphere

Ceramic engineering is the technology that involves the design and manufacture of ceramic products. Ceramics are inorganic, nonmetallic materials that have been hardened by baking at high temperatures. Highly regarded for being resistant to heat, these materials can be used for many demanding tasks that other materials, such as metals and polymers, cannot.

Until about the mid-twentieth century, the most important ceramics were the traditional clays, which were made into pottery, dinnerware, bricks, tiles, and decorative items. Since then, new materials called advanced ceramics have been prepared and are being used for a wide range of applications, including components used by the aerospace, automotive, defense, environmental, fiber-optic, and medical technologies. Ceramic parts are also used in cellular phones and personal computers. In addition, ceramic engineering is useful in such areas as petroleum refining, food processing, packaging, and mining.

Traditional ceramic raw materials include clay minerals such as kaolinite. Modern ceramic materials include silicon carbide and tungsten carbide, both of which are highly resistant to abrasion and are used in applications such as the wear plates of crushing equipment in mining operations. Each of NASA's Space Shuttles has a coating of ceramic tiles that protect it from the searing heat (up to 2,300 °F) produced during reentry into Earth's atmosphere. Thus, ceramic engineering is an important contributor to the modern technological revolution.

Abraham Darby first used coke in 1709, in Shropshire, England, to improve the yield of a smelting process. Coke is now widely used to produce carbide ceramics. Potter Josiah Wedgwood opened the first modern ceramics factory in Stoke-on-Trent, England, in 1759. Austrian chemist Karl Bayer, working for the textile industry in Russia, developed a process to separate alumina from bauxite ore in 1888. The Bayer process is still used to purify alumina for the ceramic and aluminum industries. Brothers Pierre and Jacques Curie discovered piezoelectricity in Rochelle salt circa 1880. Piezoelectricity is one of the key properties of electroceramics.

Walther Nernst developed cubic-stabilized zirconia (CSZ) in the 1920s in Berlin. CSZ is used as an oxygen sensor in exhaust systems. W.D. Kingery and others in the 1950s developed partially stabilized zirconia (PSZ), greatly increasing its toughness. PSZ is used to make cutlery and other tools. Lead zirconate titanate (PZT) was developed at the United States National Bureau of Standards in 1954. PZT is used as an ultrasonic transducer, as its piezoelectric properties greatly exceed those of Rochelle salt.[1]

The first ceramic engineering course and department in the United States were established by Edward Orton, Jr., a professor of geology and mining engineering, at the Ohio State University in 1894. Orton and eight other professionals founded the American Ceramic Society (ACerS) at the 1898 National Brick Manufacturers' Association convention in Pittsburgh. Orton was the first ACerS General Secretary, and his office at OSU served as the society headquarters in the beginning. Charles F. Binns established the New York State School of Clay-Working and Ceramics, now Alfred University, in 1900. Binns was the third ACerS president, and Orton the 32nd.[2] The Ceramic Society of Japan was founded in 1891 in Tokyo. Deutschen Keramischen Gesellschaft, the ceramic society of Germany, was founded in Berlin in 1919.

The military requirements of World War II (1939-1945) encouraged developments that created a need for high-performance materials and helped speed the development of ceramic science and engineering. Throughout the 1960s and 1970s, new types of ceramics were developed in response to advances in atomic energy, electronics, communications, and space travel. The discovery of ceramic superconductors, in 1986, has spurred intense research to develop superconducting ceramic parts for electronic devices, electric motors, and transportation equipment.

Preceding the spark of the ceramic industry in the late nineteenth century, there was the study of materials closely associated with chemistry. Since ceramics have a crystalline structure, knowledge of crystal formation and the strengths involved was important in the development of ceramics as a stand-alone scientific field.

A ceramic material may be generally defined as any inorganic crystalline oxide material. It is solid and inert. Ceramic materials are brittle, hard, strong in compression, weak in shearing and tension. They withstand chemical erosion that occur in an acidic or caustic environment. In many cases withstanding erosion from the acid and bases applied to it. Ceramics generally can withstand very high temperatures such as temperatures that range from 1,000°C to 1,600°C (1,800°F to 3,000°F). Exceptions include inorganic materials that do not have oxygen such silicon carbide. Glass by definition is not a ceramic because it is an amorphous solid (non-crystalline). However, glass involves several steps of the ceramic process and its mechanical properties behave similarly to ceramic materials.

Milling is the process by which materials are reduced from a larger size to a smaller size. Milling may involve breaking up cemented material, thus the individual particle retain their shape or pulverization which involves grinding the particles themselves to a smaller size. Pulverization is actually fracturing the grains and breaking them down.

Examples of equipment that achieve attrition milling is a planetary mill or an wet attrition mill, also called wet scrubber. A wet scrubber is a machine that has paddles in water turning in opposite direction causing two vortexes turning into each other. The material in the vortex collide and break up.

Finally, impact mills may include a ball mill with media that tumble and fracture material. Shaft impactors cause particle to particle attrition and compression which achieve size reduction.

Batching is the process of weighing the oxides according to recipes, and preparing them for mixing and drying.

Mixing occurs after batching and involve a variety of equipment such as dry mixing ribbon mixers (a type of cement mixer), Mueller mixers, and pug mills. Wet mixing generally involve the same equipment.

Forming is making the mixed material into shapes, ranging from toilet bowls to spark plug insulators. Forming can involve: Extrusion, such as extruding "slugs" to make bricks, Pressing to make shaped parts, or slip casting, as in making toilet bowls, wash basins and ornamentals like ceramic statues. Forming produces a "green" part, ready for drying. Green parts are soft, pliable, and over time will lose shape. Handling the green product product will change its shape. For example, a green brick can be "squeezed," and after squeezing it will stay that way.

Drying is removing the water or binder from the formed material. Spray drying is widely used to prepare powder for pressing operations. Other dryers are tunnel dryers and periodic dryers. Controlled heat is applied in this two-stage process. First, heat removes water. This step needs careful control, as rapid heating causes cracks and surface defects. The dried part is smaller than the green part, and is brittle, necessitating careful handling, since a small impact will cause crumbling and breaking.

Firing is where the dried parts pass through a controlled heating process, and the oxides are chemically changed to cause sintering and bonding. The fired part will be smaller than the dried part.

Assembly This process is for parts that require additional subassembly parts. In the case of a spark plug, the electrode is put into the insulator. This step does not apply to all ceramic products.

Ceramics can be used for many technological applications. One example is NASA's Space Shuttle, which uses ceramic tiles to protect it from the searing heat of reentry into Earth's atmosphere. Future supersonic space planes may likewise be fitted with such tiles. Ceramics are also used widely in electronics and optics. In addition to the applications listed here, ceramics are used as a coating in various engineering cases. For example, a ceramic bearing coating may be used over a titanium frame for an airplane. Recently, the field has come to include the studies of single crystals or glass fibers, in addition to traditional polycrystalline materials, and the applications of these have been overlapping and changing rapidly.

Modern-day ceramic engineers may find themselves in a variety of industries, including mining and mineral processing, pharmaceuticals, foods, and chemical operations.

Retrieved from https://www.newworldencyclopedia.org/p/index.php?title=Ceramic_engineering&oldid=1030326
Categories:
Hidden category:
This page was last edited on 6 January 2020, at 06:59.
Content is available under Creative Commons Attribution/Share-Alike License; additional terms may apply. See Terms of Use for details.