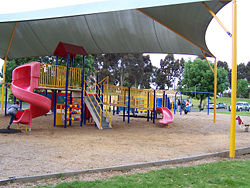 A playground or play area is an area designed for children to play freely, usually part of a school or public park. Playgrounds often also have facilities for playing informal games of adult sports, such as a baseball diamond, a skating rink, a basketball court, or a tether ball. The "playscape" is a type of playground designed to provide a safe environment for play in a natural setting.

Educators and child psychologists in the nineteenth and twentieth centuries recognized that play is an essential aspect of child development. In 1989, the United Nations Convention on the Rights of the Child stated that play and age appropriate play opportunities were important rights of the child. Today, playgrounds offer such opportunities, equipped with diverse structures and located in many public areas. With increasing concern for safety issues, equipment standards have been developed and materials that protect children from unnecessary injury are used wherever possible. The ideal playground is thus one in which children play freely, developing social skills, individual creativity, and experience happiness in an environment that is both stimulating to their imagination and keeps them safe from harm.

Seesaw with a crowd of children playing

The word Playground refers to any area for children's physical activities, but most commonly it is used to denote an area specifically set aside for children, often including recreational equipment.[1] Playground equipment is designed for use in the play areas of parks, schools, child care facilities, institutions, multiple family dwellings, restaurants, resorts, and recreational developments, and other areas of public use. 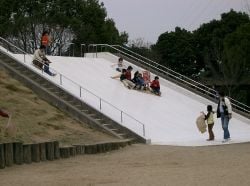 Playing has been long recognized as a critical aspect of child development. Some of the earliest studies of play started in the 1890s with G. Stanley Hall, the father of the child study movement that sparked an interest in the developmental, mental, and behavioral world of babies and children. Many of the most prominent researchers in the field of psychology and education, including Jean Piaget, Maria Montessori, John Amos Comenius, John Dewey, William James, Sigmund Freud, Carl Jung, Arnold Gesell, and Lev Vygotsky, have viewed play as endemic to the human species and an essential aspect of childhood.

Play is explicitly recognized in Article 31 of The Convention on the Rights of the Child (adopted by the General Assembly of the United Nations, November 29, 1989), which states:

One of the first professional educators to recognize the importance of play in order to allow the creativity of young children to unfold and blossom was the nineteenth century German educator Friedrich Wilhelm August Fröbel. His school included a large room for play, as well as a garden outside for the children to grow flowers and other plants. Thus, he developed the kindergarten—a "garden for children" where they could grow naturally, with support from their parents and teachers. Today, professionals recognize this same importance in the development of children, particularly with the social skills that children develop on the playground, which can become lifelong skill sets that are carried forward into their adulthood.

Children have devised many playground games and pastimes. However, because playgrounds are usually subject to adult supervision and oversight, young children's street culture often struggles to fully thrive there. Research has shown that playgrounds need to be balanced with marginal areas that (to adults) appear to be waste ground but to children they are areas that they can claim for themselves, ideally a wooded area or field.[2] In response to this, "playscapes" have emerged, which can provide children with the necessary feeling of ownership. Playscapes can also provide parents with the assurance of their child's safety and well-being, which may not be prevalent in an open field or wooded area. 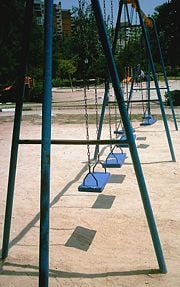 Modern playgrounds in the U.S. developed from political and sociological movements in the late nineteenth and early twentieth century, during which school safety and a push against the dangers of industrialization were being made, largely by women.[3] Concerned mother organizations helped start charity works in which areas for playgrounds were set aside in urban environments so as to give children safe places to play. In the early the twentieth century, the National Playground Association helped to establish municipal parks and playgrounds, both in urban and rural environments, and it was not long before local and state governments started to mandate that public schools require safe facilities where students could socialize and play.[3] At first the equipment in these spaces were simple constructions, mostly made of wood. However, as more people became involved with the playground movement, more innovations were made in equipment. Soon sandboxes, swings, seesaws and other equipment that children could actively engage were being produced.[4]

Increased attention to the positive benefits of physical education during the twentieth century helped to solidify the idea that physical activity is an integral part of a child's education, and soon afterwards playgrounds became staples in both public and private schools. In 1928, the National Recreation Association proposed guidelines for playground equipment that would be appropriate for different age groups. For example, a sandbox, chair swings, a small slide, and a piece of simple low climbing equipment for a preschool playground; a horizontal ladder, a balance beam, a giant stride, swings, a slide, a horizontal bar, seesaws, and other low climbing equipment were recommended for an elementary school playground.[4]

With new materials, such as metals and plastics, being used to create playgrounds, the safety of children also became a concern among playground administrators and the public at large, so that playgrounds began to be certified in specific safety requirements.

Playgrounds in other countries developed around the same time as the U.S. and for similar reasons. Playgrounds were an integral part of urban culture in the USSR. In the 1970s and 1980s there were playgrounds in almost every park in many Soviet cities. Playground apparatus was reasonably standard all over the country; most of them consisted of metallic bars with relatively few wooden parts, and were manufactured in state-owned factories. Some of the most common constructions were the carousel, sphere, seesaw, rocket, and bridge.

In the 1990s, after the breakup of the USSR, many items of playground apparatus in post-Soviet states were stolen by metal-thieves, while relatively few new playgrounds were built. However, there were so many Soviet playgrounds that many of them still exist and are in a relatively good state, especially those which were repainted.

While playgrounds are frequent around the world, in some poorer and less developed countries, such as in Africa and South America, playgrounds are usually found in municipalities, if at all, and can be older, less well maintained, and sometimes potentially dangerous. 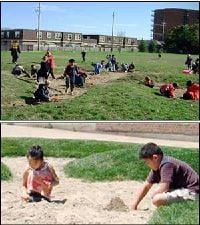 Playscapes are play environments that blend natural materials, features, and indigenous vegetation with creative landforms to create purposely complex interplays of natural, environmental objects in ways that challenge and fascinate children and teach them about the wonders and intricacies of the natural world while they play within it. 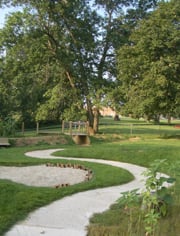 For a playground to be considered a "playscape" the space should be as natural as possible, with few man-made components. Using native plants, rolling hills, and lots of trees, playscapes represent a natural place such as a forest. Playscapes offer a wide range of open-ended play options that allow children to be creative and use their imagination.

Playscapes offer a wide range of benefits such as increasing physical activity, fine and gross motor skills and cognitive development. They are also used in horticultural therapy for rehabilitation of mental and/or physical ailment. They increase participation rates and decrease absenteeism, decrease bullying, decrease injury rates, increase focus and attention span, and help with social skills in schools.[5]

Playscapes are found to be very beneficial in the growth and development of children both mentally and physically. They have been shown to increase children's level of physical activity and motor ability.[5] Cognitive development, focus, attention span and social skills are also improved.[6] 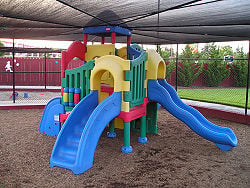 The safety of playgrounds has been disputed in schools and among regulators. As the kinds of equipment found in playgrounds has changed, safer equipment built with modern materials has become more common. For example, an older jungle gym might be constructed entirely from steel bars, while newer ones tend to have a minimal steel framework while providing a web of nylon ropes for children to climb on. Often, playgrounds with equipment that children may fall off of has mulch on the ground to help break children's falls. Rubber mulch is gaining popularity due to its added ability to break falls.

Concern about safety in playgrounds has led to the establishment of safety standards. In the United States, the Consumer Product Safety Commission (CPSC) has created guidelines for both public playground and home playground equipment.[7] These regulations are nation-wide and provide a basis for safe playground installation and maintenance practices.

In Europe, EN 1177 of the European Committee for Standardization specifies the requirements for surfaces used in playgrounds. For each material type and height of equipment it specifies a minimum depth of material required.[8] EN 1176 covers playground equipment standards.[9]

Playscapes have a fraction of the number of child injuries compared to standard playgrounds with play structures. The most frequent injury to children on playgrounds is a fracture of the upper limb resulting from falls from climbing apparatus.[10] Playscapes combat the issue of fall heights by using topography changes for children to climb and experience changes in height. Companies in Canada have made strides in reducing fall height by using topography as a main feature in their designs.