The name pleistocene is derived from the Greek πλεῖστος (pleistos "most") and καινός (kainos "new"). This recent period is characterized by repeated cycles of glaciation and the emergence of Homo sapiens.

The International Commission on Stratigraphy (a body of the International Union of Geological Sciences) is in agreement with the time period for the Pleistocene, but has not yet confirmed a Global Boundary Stratotype Section and Point (GSSP) for the Pleistocene/Holocene boundary. A GSSP is an internationally agreed upon section of the geologic strata that serves as the reference section for a particular boundary on the geologic time scale. GSSPs are generally, but not always, based on paleontological changes. The proposed section for the Pleistocene is the North Greenland Ice Core Project ice core (75°06′N 42°18′W) (Svensson et al. 2005).

The Global Boundary Stratotype Section and Point for the start of the Pleistocene is in a reference section at Vrica, 4 kilometers south of Crotone in Calabria, southern Italy, a location whose exact dating has recently been confirmed by analysis of strontium and oxygen isotopes, as well as by planktonic foraminifera.

The epoch was intended to cover the recent period of repeated glaciations; however, the start was set too late and some early cooling and glaciation are now believed to be in the Gelasian stage at end of the Pliocene. Therefore, some climatologists and geologists would prefer a start date of around 2.58 million years BP (Clague 2006). Likewise, the Quaternary (the traditional name for the period) was subsequently redefined to start 2.58 million years ago as more consistent with the data (Pillans 2005).

The continuous climatic history from the Pliocene into the Pleistocene and Holocene was one reason for the International Commission on Stratigraphy to propose discontinuance of the use of the term "Quaternary." This proposal was strongly objected to by the International Union for Quaternary Research (INQUA). The ICS proposed that the "Quaternary" be considered a sub-era (sub-erathem) with its base at the base of the Pilocene Gelasian Stage GSSP at ca. 2.6 Ma at Marine Isotope State 103. The boundary is not in dispute, but the sub-era status was rejected by INQUA. The matter remains under discussion with resolution expected to be reached by the ICS and INQUA in 2007-8 (Clague 2005). Therefore, the Pleistocene is currently an epoch of both the longer Neogene and the shorter Quaternary. 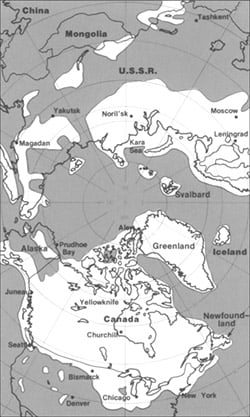 The maximum extent of glacial ice in the north polar area during Pleistocene time.

The modern continents were essentially at their present positions during the Pleistocene, probably having moved no more than 100 km since.

Pleistocene climate was characterized by repeated glacial cycles where continental glaciers pushed to the 40th parallel in some places. It is estimated that, at maximum glacial extent, 30 percent of the Earth's surface was covered by ice. In addition, a zone of permafrost stretched southward from the edge of the glacial sheet, a few hundred kilometers in North America, and several hundred in Eurasia. The mean annual temperature at the edge of the ice was −6°C; at the edge of the permafrost, 0°C.

Each glacial advance tied up huge volumes of water in continental ice sheets 1500-3000 meters (m) thick, resulting in temporary sea level drops of 100 m or more over the entire surface of the Earth. During interglacial times, such as Earth is experiencing now, drowned coastlines were common, mitigated by isostatic or other emergent motion of some regions.

The effects of glaciation were global. Antarctica was ice-bound throughout the Pleistocene as well as the preceding Pliocene. The Andes were covered, in the south by the Patagonian ice cap. There were glaciers in New Zealand and Tasmania. The current decaying glaciers of Mount Kenya, Mount Kilimanjaro, and the Ruwenzori Range in east and central Africa were larger. Glaciers existed in the mountains of Ethiopia and to the west in the Atlas mountains.

In the northern hemisphere, many glaciers fused into one. The Cordilleran ice sheet covered the North American northwest; the east was covered by the Laurentide. The Fenno-Scandian ice sheet rested on north Europe, including Great Britain; the Alpine ice sheet on the Alps. Scattered domes stretched across Siberia and the Arctic shelf. The northern seas were frozen.

South of the ice sheets, large lakes accumulated due to blockage of outlets and decreased evaporation in the cooler air. North central North America was totally covered by Lake Agassiz. Over 100 basins, now dry or nearly so, were overflowing in the American west. Lake Bonneville, for example, stood where Great Salt Lake (Utah, United States) now does. In Eurasia, large lakes developed as a result of the runoff from the glaciers. Rivers were larger, had a more copious flow, and were braided. African lakes were fuller, apparently from decreased evaporation.

Deserts, on the other hand, were drier and more extensive. Due to the decrease in oceanic and other evaporation, rainfall was lower.

Ice ages as reflected in atmospheric CO2, stored in bubbles from glacial ice of Antarctica

Four major glacial events have been identified, as well as many minor intervening events. A major event is a general glacial excursion, termed a "glacial." Glacials are separated by "interglacials." During a glacial, the glacier experiences minor advances and retreats. The minor excursion is a "stadial;" times between stadials are "interstadials."

These events are defined differently in different regions of the glacial range, which have their own glacial history depending on latitude, terrain, and climate. There is a general correspondence between glacials in different regions. Investigators often interchange the names if the glacial geology of a region is in the process of being defined. However, it is generally incorrect to apply the name of a glacial in one region to another. You would not refer to the Mindel as the Elsterian or vice versa.

For most of the twentieth century, only a few regions had been studied and the names were relatively few. Today, the geologists of different nations are taking more of an interest in Pleistocene glaciology. As a consequence, the number of names is expanding rapidly, and will continue to expand.

Four of the better known regions with the names of the glacials are listed in the table below. It should be emphasized that these glacials are a simplification of a more complex cycle of variation in climate and terrain. Many of the advances and stadials remain unnamed. Also, the terrestrial evidence for some of them has been erased or obscured by larger ones, but we know they existed from the study of cyclical climate changes.

There is no systematic correspondence of pluvials to glacials, however. Moreover, regional pluvials do not correspond to each other globally. For example, some have used the term "Riss pluvial" in Egyptian contexts. Any coincidence is an accident of regional factors. Names for some pluvials in some regions have been defined.

The sum of transient factors acting at the Earth's surface is cyclical, including climate, ocean currents and other movements, wind currents, temperature, and so forth. The waveform response comes from the underlying cyclical motions of the planet, which eventually drag all the transients into harmony with them. The repeated glaciations of the Pleistocene were caused by the same factors.

Glaciation in the Pleistocene was a series of glacials and interglacials, stadials and interstadials, mirroring periodic changes in climate. The main factor at work in climate cycling is now believed to be Milankovitch cycles. These are periodic variations in regional solar radiation caused by the sum of a number of repeating changes in the Earth's motion.

Milankovitch cycles cannot be the sole factor, as they do not explain the start and end of the Pleistocene ice age, or repeated ice ages. They seem to work best within the Pleistocene, predicting a glaciation once every 100,000 years.

In oxygen isotope ratio analysis, variations in the ratio of O-18 to O-16 (two isotopes of oxygen) by mass (measured by a mass spectrometer) present in the calcite of oceanic core samples is used as a diagnostic of ancient ocean temperature change and therefore of climate change. Cold oceans are richer in O-18, which is included in the shells of the microorganisms contributing the calcite.

A more recent version of the sampling process makes use of modern glacial ice cores. Although less rich in O-18 than sea water, the snow that fell on the glacier year by year nevertheless contained O-18 and O-16 in a ratio that depended on the mean annual temperature.

Temperature and climate change are cyclical when plotted on a graph of temperature versus time. Temperature coordinates are given in the form of a deviation from today's annual mean temperature, taken as zero. This sort of graph is based on another factor of isotope ratio versus time. Ratios are converted to a percentage difference (δ) from the ratio found in standard mean ocean water (SMOW).

The graph in either form appears as a waveform with overtones. One half of a period is a Marine isotopic stage (MIS). It indicates a glacial (below zero) or an interglacial (above zero). Overtones are stadials or interstadials.

According to this evidence, Earth experienced 44 MIS stages beginning at about 2.4 MYA in the Pliocene. Pliocene stages were shallow and frequent. The latest were the most intense and most widely spaced.

By convention, stages are numbered from the Holocene, which is MIS1. Glacials receive an even number; interglacials, odd. The first major glacial was MIS22 at about 850,000 YA. The largest glacials were 2, 6, and 12; the warmest interglacials, 1, 5, 9 and 11.

Both marine and continental faunas were essentially modern. Scientific evidence indicates that humans in their present form originated during the Pleistocene.

The extinctions were especially severe in North America, where native horses and camels were eliminated.