Mastodon is the common name for any of the large, extinct elephant-like mammals comprising the family Mammutidae (syn. Mastodontidae) of the order Proboscidea, characterized by long tusks, large pillar-like legs, and a flexible trunk or proboscis. Although similar to elephants (family Elephantidae), including mammoths, mastodons belong to a different family of proboscidians and have molar teeth of a different structure. They also are known as mastodonts, from the synonymous family name Mastodontidae.

Often references to mastodons are limited to members of the genus Mammut, which was formerly known as the Mastodon genus. In this article, the more inclusive meaning, including all members of the family, will be used unless otherwise stated. Mastodons lived from about the Oligocene of the Paleogene period, about 30 million years ago, until about 10,000 years ago, when the only known North American species, the American mastodon (Mammut americanum) died out. This well-known species is a close relative of the Borson's mastodon (Mammut borsoni) that lived in Europe.

Fossils discoveries of this mysterious animal have fueled the imagination and curiosity of philosophers, theologians, scientists, and others, particularly throughout the eighteenth and nineteenth centuries. Thomas Jefferson himself, as president of the United States, enlisted William Clark to collect mastodon fossils from Big Bone Lick, Kentucky. Some religious leaders once considered early findings to be of a race of giants destroyed by the biblical flood. Today, mastodons continue to add to the wonder of nature for people, and are popular subjects of articles and TV programs. 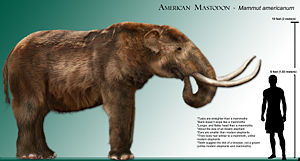 Mastodons belong to the mammalian order Proboscidea, whose only extant (living) members are those in the elephant family, Elephantidae. Mastodons belong to another proboscidean family, Mammutidae (syn. Mastodontidae). The mammoths are another extinct group that overlapped in time with the mastodons, also dying out about 10,000 years ago, but they also belonged to the Elephantidae family, comprising the genus Mammuthus. Altogether, paleontologists have identified about 170 fossil species that are classified as belonging to the Proboscidea, with the oldest dating from the early Paleocene epoch of the Paleogene period over 56 million years ago. Mastodons first appeared in the fossil record of what is now Northern Africa in the Oligocene of the Paleogene period about 30 million years ago, while Primelephas, the ancestor of mammoths and modern elephants, appeared in the late Miocene epoch, about seven million years ago.

Mastodons, like elephants, are large, heavy mammals with tusks and flexible trunks. Their skulls tended to be larger than those of mammoths, and the American mastodons (Mammut americanum) had low-domed heads unlike the higher-domed heads of mammoths and modern-day Asian elephants (Dykens and Gillette). The skeleton of mastodons was stockier and more robust (Kurtén and Anderson 1980). Mastodons also seem to have lacked the undercoat characteristic of mammoths (Kurtén and Anderson 1980).

Mastodons differed from mammoths primarily in the blunt, cone-like cusps on the crowns of their molars. Indeed, the name mastodon comes from the Greek μαστός and οδούς, meaning "nipple tooth," reflecting the distinctive, nipple-like protrusions on the crowns, which would have been more conducive to browsing on trees, shrubs, and swamp plants than grazing on grasses, as with the mammoths and their flatter, ridged teeth (Dykens and Gillette).

Thus, the name mastodon, which means "nipple teeth," became both their common name and an obsolete name for their family (Mastodontidae) and the genus Mastodon (Agusti and Mauricio 2002). In contrast, mammoths and other elephants, whose molars were large, complex, specialized structures, had molars that were more flat and had low ridges of dense enamel on the surface (ANS). Mastodons are thought to have been browsers, while mammoths were grazers.

The American mastodon tended to be about 2.1 meters (seven feet) in height for females and 3.1 meters (ten feet) in height for the males, with adult mastodons weighing as much as 5500 kilograms (six tons) (Dykens and Gillette). This is smaller than the imperial mammoth of North America, which reached great size, being up to at least five meters (16 feet) at the shoulder (ANS). It also is smaller than the largest group of extant elephants, the African elephants, which are up to 3.9 meters (13 feet) tall. It is about the size of woolly mammoths, which had about the same height (2.8 to 3.4 meters, or nine to 11 feet) and weight (four to six tons) as the Asian elephants (ANSP).

Mastodon tusks tended to be less curved than those of the mammoths, but longer and larger than those of modern elephants (Dykens and Gillette). The tusks of the American mastodon sometimes exceeded five meters in length and were nearly horizontal, in contrast with the more curved mammoth tusks (Kurtén and Anderson 1980). Young males had vestigial lower tusks that were lost in adulthood (Kurtén and Anderson 1980). However, it has been proven that female American mastodons had lower pairs of tusks.

The tusks of American mastodons were probably used to break branches and twigs, although some evidence suggests males may have used them in mating challenges; one tusk is often shorter than the other, suggesting that, like humans and modern elephants, mastodons may have had laterality (Kurtén and Anderson 1980). Examination of fossilized tusks revealed a series of regularly spaced shallow pits on the underside of the tusks. Microscopic examination showed damage to the dentin under the pits. It is theorized that the damage was caused when the males were fighting over mating rights. The curved shape of the tusks would have forced them downward with each blow, causing damage to the newly forming ivory at the base of the tusk. The regularity of the damage in the growth patterns of the tusks indicates that this was an annual occurrence, probably occurring during the spring and early summer (Fisher 2006). 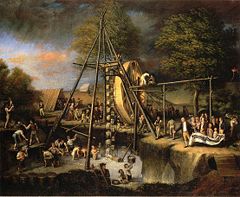 The Exhumation of the Mastodon by Peale

Fossils of the American mastodon (Mammut americanum) have been found across all of North America, from Alaska to central Mexico, and on the eastern seaboard (Dykens and Gillette). Other species of mastodon were widely distributed throughout the world, with fossils found to be common and often well-preserved in Pliocene and Pleistocene age deposits.

Though their habitat spanned a large territory, American mastodons (Mammut americanum) were most common in the ice age spruce forests of the eastern United States, as well as in warmer lowland environments (Kurtén and Anderson, 1980). Their remains have been found as far as 300 kilometers offshore of the northeastern United States, in areas that were dry land during the low sea level stand of the last ice age (Kurtén and Anderson 1980). Mastodon fossils have been found in South America; on the Olympic Peninsula of Washington state, U.S. (Manis Mastodon Site) (Kirk and Daugherty 2007); in Kentucky (particularly noteworthy are early finds in what is now Big Bone Lick State Park); the Kimmswick Bone Bed in Missouri; in Stewiacke, Nova Scotia, Canada; in Richland County, Wisconsin; in La Grange, Texas; and north of Fort Wayne, Indiana, U.S.

Fossils of Mammut borsoni have been found in England, Germany, the Netherlands, and northern Greece.

Mastodons first appeared in Northern Africa in the Oligocene of the Paleogene period about 30 million years ago.

Members of the Mammut (Mastodon) genus are thought to have first appeared almost four million years ago. They were native to both Eurasia and North America, but the Eurasian species Mammut borsoni died out approximately three million years ago. Mammut americanum, the American mastodon, disappeared from North America about 10,000 years ago (BBC 2007), at the same time as most other Pleistocene megafauna.

The cause for the extinction of the American mastodon is unknown. Recent studies indicate that tuberculosis may have been partly responsible for the extinction of the mastodon 10,000 years ago (Ker 2006). Another influencing factor to their eventual extinction in America during the late Pleistocene may have been the presence of Paleo-indians, which entered the American continent in relatively large numbers 13,000 years ago. According to one school of thought, hunting by the Paleo-Indians could have caused a gradual attrition to the mastodon and mammoth populations, significant enough that over time the mastodons were hunted to extinction (Ward 1997).

Retrieved from https://www.newworldencyclopedia.org/p/index.php?title=Mastodon&oldid=1086218
Categories:
Hidden category:
This page was last edited on 7 November 2022, at 16:47.
Content is available under Creative Commons Attribution/Share-Alike License; additional terms may apply. See Terms of Use for details.