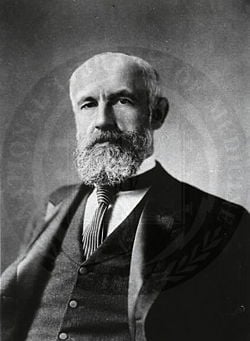 Granville Stanley Hall (February 1, 1844 – April 24, 1924) was an American pioneering psychologist and educator. His interests focused on childhood development, evolutionary theory, and their applications to education.

Hall was a strong believer in the scientific method and its application to the study of human nature. Thus, he supported empirical research in the then emerging area of child development, developing theories both of psychological development and its application to children's education. Although Hall's understanding was incomplete and his theories not fully accepted, his work was significant in laying the foundation for the field.

Hall was born in Ashfield, Massachusetts, on February 1, 1844. His parents were rather religious, and his mother wanted him to go into the ministry. He graduated from Williams College in 1867, and then studied at the Union Theological Seminary to prepare as a clergyman.

Clark's personal desire, however, was to travel and accomplish something of note in the world. Soon, he left for Germany for three years, where he studied philosophy and also attended Du Bois-Reymond's lectures on physiology. Returning to New York in 1871, he completed his divinity degree and served briefly at a country church. He then secured a position at Antioch College near Dayton, Ohio, where he taught a variety of courses.

Inspired by Wilhelm Wundt's Principles of Physiological Psychology, Hall set out again for Germany to learn from Wundt. However, he was offered a teaching post in English at Harvard University, which also allowed him to work with William James. Hall received his doctorate in 1878 for a dissertation on muscular perception, the first American doctorate in psychology. From then to 1880 Hall spent in Germany, where he worked for Wundt in the Leipzig laboratory.

In 1881, Hall joined the new graduate John Hopkins University, where he worked with young people who later went on to positions of note within psychology, among them John Dewey and James McKeen Cattell.

In 1882 he was appointed as a professor of psychology and pedagogics at Johns Hopkins University, and began what is considered to be the first American psychology laboratory.[1] There, Hall objected vehemently to the emphasis on teaching traditional subjects, such as Latin, mathematics, science, and history, in high school, arguing instead that high school should focus more on the education of adolescents than on preparing students for college.

In 1889 Hall was named the first president of Clark University, a post he filled until 1920. During his 31 years as president at Clark University, Hall remained intellectually active. He was instrumental in the development of educational psychology, and attempted to determine the effect adolescence has on education. He was also responsible for inviting Sigmund Freud and Carl Jung to visit and deliver lectures in 1909 at the "Clark Conference" organized in celebration of Clark University's twentieth anniversary.

In 1887 he founded the American Journal of Psychology and in 1892 was appointed as the first president of the American Psychological Association.

In the year of his death, Hall was elected to a second term as president of the American Psychological Association; the only other person to be so honored was William James.

Hall, like James, did not have the temperament for laboratory work. Rather, he created an intellectual atmosphere to support those who were more empirically inclined. In this way Hall contributed to the emerging body of psychological knowledge. Specifically, he was convinced of the importance of genetics and evolution for psychology, which was reflected in his writings and his support of the study of developmental psychology in terms of phylogenetic and ontogenetic perspectives.

These ideas prompted Hall to examine aspects of child development in order to learn about the inheritance of behavior. However, the subjective character of these studies made their validation impossible. His work also delved into controversial portrayals of the differences between women and men, as well as the concept of racial eugenics.[1]

Darwin's theory of evolution and Ernst Haeckel's theory of recapitulation ("ontogeny recapitulates phylogeny") were large influences on Hall's work. His maturationist theory of child development was based on the premise that growing children would recapitulate evolutionary stages of development as they grew up, and that it was counterproductive to push a child ahead of its development stage.

Hall's theory was not influential in his day. Yet, it laid a foundation for later theorists, such as Jean Piaget, whose stage theories of child development have impacted education.

Hall coined the phrase "Storm and Stress" with reference to adolescence, taken from the German Sturm und Drang-movement. Its three key aspects are: conflict with parents, mood disruptions, and risky behavior. As was later the case with the work of Lev Vygotsky and Jean Piaget, public interest in this phrase and Hall's originating role, faded. Later research has led to some reconsideration of the phrase and its denotation. Evidence does support the three aspects of storm-and-stress, but modified to take into account individual differences and cultural variations. Psychologists do not accept storm-and-stress as universal, but do acknowledge the possibility in brief passing. Not all adolescents experience storm-and-stress, but it is more likely during adolescence than at other ages.

In 1904 Hall published an original work in psychology focusing on adolescence, Adolescence: Its Psychology and Its Relation to Physiology, Anthropology, Sociology, Sex, Crime, Religion and Education, which was widely read and discussed by psychologists, educators, medical doctors, other professionals, and also by parents. Its focus on adolescence fed a growing national concern in the early twentieth century about issues of femininity, masculinity, coeducation, and concern over appropriate information and experience for adolescents growing into adulthood.

In 1909 Hall began The Children's Institute at Clark University. The institute was founded with the double purpose of collecting data on children, which Hall initially hoped would create a psychology founded on genetic and evolutionary principles (the direct outcome of his functionalist interest in mental adaptation) and of using those data to form the basis for sound educational practices. The institute functioned as both a laboratory for data to confirm Hall's recapitulation theory, and as a program for teaching and promoting child study to teachers and others in education. The data were disappointing with respect to their ability to confirm Hall's theoretical position. Therefore, the institute functioned primarily as an educational entity and drew the interest of educators, teachers, and parents.

In 1922, Hall published his final work, Senescence, a study of old age. By this time Hall himself was no longer at Clark University, having retired as president in 1920, and was struggling with personal definitions of retirement and the process of aging as final points of development. In the book, Hall called for a new definition of aging, not as degeneration, but rather as a stage of psychological renewal and creativity. Hall's view of aging was not significantly different from those views advocated by other scholars and, as with others, Hall fell victim to an understanding of aging that held the individual responsible for psychological health in old age, relegating culture and its construction of aging to a minor role.

Hall did not start systems of psychology, nor develop coherent theoretical frameworks, nor leave behind loyal followers, but he was a loyal teacher and devoted organizer of psychology. He was instrumental in firmly establishing psychology in the United States through both substantive and practical activities, in particular his invitation to Sigmund Freud to speak at Clark University brought psychoanalysis to America. In addition to his contribution to child psychology and educational issues, he succeeded in securing the recognition of psychology as a profession.

Hall also founded a number of journals to provide a forum for research and scholarship in psychology: American Journal of Psychology, founded in 1887; Pedagogical Seminary (now under the title of Journal of Genetic Psychology); Journal of Applied Psychology; and Journal of Religious Psychology. Hall made psychology functional as a scientific discipline and left it firmly entrenched in American academia.

At Johns Hopkins University, Hall's course in "Laboratory Psychology" attracted students such as John Dewey, James McKeen Cattell, and Joseph Jastrow. Other students influenced and taught by Hall included Arnold Gesell, Henry Goddard, Edmund C. Sanford, and Lewis M. Terman. Although all of these students moved beyond the influence of Hall, his interest and insistence upon psychology as an experimental endeavor served as a catalyst for much of their later work.