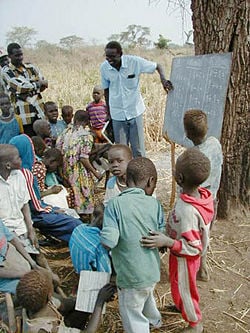 Coeducation is the integrated education of males and females at the same school facilities. The term "Co-ed" is a shortened version of "co-educational," and is also sometimes used as an informal and increasingly archaic reference to a female college student, particularly in the United States. Before the 1960s, many private institutions of higher education restricted their enrollment to a single sex. Indeed, most institutions of higher education, both public and private, restricted their enrollment to a single sex at some point in their history.

World history shows a clear preference for the education of boys over girls; the education of girls, when it existed, was usually informal and at home. In most ancient societies, such as Greece, India, and Egypt, organized educational systems were for boys only. The education of women in general was rare; coeducation even more so. Sparta, a Greek city-state, was one of the few places in the ancient world with organized schooling for girls as well as boys. Although the two were separate, many historians believe that both schools were very similar in nature. Most education in Sparta was of a physical nature; the goal of a Spartan education was to create ideal soldiers and strong young women who would bear strong babies.[1]

Before the eighteenth and nineteenth centuries, most schools were single-sex. In cases like one room schoolhouses in frontier America, coeducation was necessary from a practical standpoint; a single teacher was responsible for the education of all children in a given area, and separation by age or sex was impractical. In England, the first public boarding school to become coeducational was Bedales School founded in 1893 by John Haden Badley and coeducational since 1898. The Scottish Dollar Academy claims to be the first coeducational boarding school in the UK (in 1818). In the 1960s, many Western countries shifted to coeducation. Not only was coeducation a less expensive way of schooling children, but it also supported the thrust towards gender equality. In 1972, U.S. schools made coeducation mandatory in public schools.

Institutions of higher education have also been historically for men only. In most countries, when women were given the option of a higher education, their only choice was to attend an all-female college.

Coeducation Within Primary and Secondary Schools

In many countries, schools were historically for boys only. Where girls were allowed to attend school, they rarely continued past primary schools. In western Europe, coeducation was first introduced at the urging of Protestant groups who wanted both girls and boys to be able to read the Bible. The Quakers helped to promote coeducation in the British colonies. Scandinavian countries were some of the first to embrace coeducation; Danish schools were coeducational in the eighteenth century, and Norwegian schools became coeducational by law in 1896. Other countries were slower to embrace coeducation; Germany did not provide hardly any secondary schooling for girls until the end of the nineteenth century. When separate girls' secondary schools were introduced, they were vastly inferior to boys' schools.[2]

Coeducation is less prevalent in the Middle East, where religious and cultural values restrict the interaction of males and females. While some primary schools are coeducational, most are separated by gender. In the United Arab Emirates, for example, most primary and all secondary schools are not coeducational.[3]

Coeducation Within Institutions of Higher Learning

The first coeducational institution of higher education in the United States was Franklin College in Lancaster, Pennsylvania, established in 1787. Its first enrollment class in 1787 consisted of 78 male and 36 female students. Among the latter was Rebecca Gratz, the first Jewish female college student in the United States. However, the college began having financial problems and it was reopened as an all-male institution. It became coed again in 1969 under its current name, Franklin and Marshall College.

The longest continuously operating coeducational school in the United States is Oberlin College in Oberlin, Ohio, which was established in 1833. The first four women to receive bachelor's degrees in the United States earned them at Oberlin in 1841. Later, in 1862, the first African-American woman to receive a bachelor's degree (Mary Jane Patterson) also earned it from Oberlin College.

The University of Iowa was the first public or state university in the United States to become coeducational, and for much of the next century, public universities (and land grant universities in particular) would lead the way in higher education coeducation. Many other early coeducational universities, especially west of the Mississippi River, were private, such as Carleton College (1866), Texas Christian University (1873), and Stanford University (1891).

At the same time, according to Irene Harwarth, Mindi Maline, and Elizabeth DeBra, "women's colleges were founded during the mid- and late-nineteenth century in response to a need for advanced education for women at a time when they were not admitted to most institutions of higher education."[4] Notable examples are the prestigious Seven Sisters. Of the seven, Vassar College is now co-educational and Radcliffe College has merged with Harvard University. Wellesley College, Smith College, Mount Holyoke College, Bryn Mawr College, and Barnard College remain single-sex institutions.

The first coeducational institution of higher learning in China was the Nanjing Higher Normal Institute, which was later renamed National Central University in 1928 and Nanjing University in 1949. For thousands of years in China, education, especially higher education, was the privilege of men. In the 1910s, women's universities were established such as Ginling Women's University and Peking Girl's Higher Normal School, but coeducation was still prohibited.

In 1920, Nanjing Higher Normal Institute began to recruit female students, and later that year the first eight coeducational Chinese women students were enrolled. In the same year Peking University also began to allow women audit students. After 1949, when the Communist Party of China controlled mainland China, almost all schools and universities became coeducational. However, in later years, many girl schools and women colleges have again emerged.

In Europe, coeducation was more easily accepted in institutions of higher learning than it was in secondary education. In England, the University of Cambridge established Girton College for women in 1869 and Newnham College followed in 1872. The London School of Economics was also one of the first to open its doors to women in 1874. Women were first allowed to matriculate in Germany in 1901. By 1910, coeducation was becoming more widespread; women were admitted into universities in The Netherlands, Belgium, Denmark, Sweden, Switzerland, Norway, Austria-Hungary, France, and Turkey.[5]

While most schools in the Middle East remain single-sex, coeducation has become more accepted. In Iran, for instance, the prestigious Tehran University is open to both sexes. From 2002 to 2006, women accounted for sixty percent of entrants to the University.[6]

In other countries, such as Saudi Arabia, strict adherence to the rules of Islam forbids the intermingling of males and females, and schools are single-sex only. In Afghanistan under Taliban rule, girls were forbidden to receive an education. After the fall of the Taliban in 2001, women became equal to men in the eyes of the government, but the education of females is still unacceptable to many rural citizens. Girls' schools have been burned down, and girls poisoned for attempting to go to school.[7] The education of women is becoming more accepted in much of the Middle East, but even with additional opportunities, middle eastern women continue to struggle against inequality and oppression.

Sex Differences in the Brain

Many supporters of single-sex education hold that it can help students learn more effectively. The practitioners of single-sex school state that boys and girls learn differently because of structural differences between male and female brains. Studies on male and female brains indicate that males and females process information using different sections of their brains. This is evidenced in the ways males and females approach problem solving. For instance, when men are asked to give directions, they access the left hippocampus, and often use abstract concepts such as north and south. Women, on the other hand, access the cerebral cortex, and typically refer to landmarks that can be seen or heard to navigate. Advocates of single-sex education argue that these differences mean that the best method of instruction differs for males and females; a technique that engages girls in the subject matter may bore boys, and vice versa.[8]

From a pro-coeducation standpoint, single-sex institutions are inherently unequal. Advocates of coeducation argue that gender stereotypes are reinforced and that single-sex education accentuates gender based educational limitations and discrimination by not offering courses like cheer-leading or home economics to boys, or football or wood shop to girls.

Those who support single-sex education insist that this is not the case, and that single-sex institutions actually promote the subversion of gender roles. Margrét Pála Ólafsdóttir, an Icelandic educator who introduced single-sex kindergarten to Iceland in 1989, stated: "Both sexes seek tasks they know. They select behavior they know and consider appropriate for their sex. In mixed [coed] schools, each sex monopolizes its sex-stereotyped tasks and behavior so the sex that really needs to practice new things never gets the opportunity. Thus, mixed-sex schools support and increase the old traditional roles."[9] In this view, for example, in a single-sex school it would be less intimidating for a girl to choose to play the trumpet than it would in a coeducational school where trumpets were already being played mostly by boys.

Critics of single-sex education argue that without the presence of the opposite sex, students are denied a learning environment representative of real life. This deprives them of the opportunity to develop skills for interaction with peers of all genders in their work environment and fosters ignorance and prejudice towards the other gender.

However, defenders argue that socialization does not depend on the two genders being placed physically together, but is rather a matter of educating children in habits such as respect, generosity, fairness, loyalty, courtesy, and so forth. From a single-sex perspective, this can be done with more success knowing the distinct tendencies and learning style differences of boys and girls. It is also argued that mixing of the sexes (particularly with adolescents) creates distraction, increased sexual harassment, and teenage pregnancy, all of which interfere with the quality of education.