Wellesley College is a women's liberal arts college that opened in 1875, founded by Henry Fowle Durant and his wife Pauline Fowle Durant. Situated in Wellesley, Massachusetts (13 miles west of Boston), Wellesley college grants four-year baccalaureate degrees and is one of the original Seven Sisters Colleges. Approximately 2,400 students attend the school. Wellesley consistently ranks among the top five liberal arts colleges in the United States, and is the highest ranking women's college in this category.

As one of the "Seven Sisters," Wellesley has been and continues to be instrumental in advancing educational opportunities for women. In this way it has supported the advancement of women in society, enabling them to receive the level of education that permits them to make significant impact in all arenas. Wellesley, continuing to be an educational institution for women only, also maintains the unique feminine distinctions that are essential to the establishment of healthy families and a stable society. Clarification of those distinctions are needed, however, for women to be able to contribute in the most effective way to the establishment of a world of peace and harmony for all. The college's motto, "not to be ministered unto but to minister" speaks to the divine dictum, "live for the sake of others."

Henry Fowle Durant, together with his wife Pauline, founded the college to give women an opportunity for higher education. Durant believed women were capable of great things and merely needed the chance to prove this. Today, the mission of the college is to "provide an excellent liberal arts education for women who will make a difference in the world." The college's motto, "Non Ministrari sed Ministrare" (not to be ministered unto but to minister), reflects this purpose.

Did you know?
Wellesley College was founded by Pauline and Henry Fowle Durant to give women an opportunity for higher education 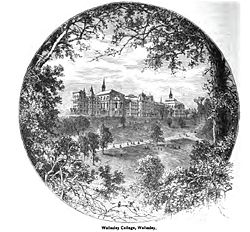 Campus of Wellesley College as it appeared circa 1880

The Durants were reformers and their vision for Wellesley was not just a college that accepted women, but an institution that was truly a women's university, run by women for the education of women, and through the uplifting of women by means of such education to improve society as a whole.[2] At the time of its establishment, women were unable to pursue both a career and marriage and family. Thus, the faculty at Wellesley were all single women. The social life that developed there in the late nineteenth and early twentieth centuries was vastly different from that at other higher educational institutions. Wellesley became a tight-knit community, closely resembling an extended family:

Its members, with shared backgrounds and tastes, shared visions of life and work, and often shared bonds of family or prior friendship, could hardly but produce an extraordinary community. In this milieu, no one was isolated, no one forgotten.[2]

This contrasted sharply with the traditional male-dominated universities, since the Wellesley women faculty "did not shift their life courses away from the communal mentality" nor did they adhere to a work ethic in which "vertical mobility took precedence over sisterhood."[2] In this special environment, women were educated not only in the academic pursuits found in all universities but also experienced a world "which touched every woman in every aspect of her life, and gave each a sense of belonging to an all-purposive, all-embracing whole."[2] 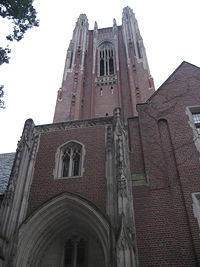 The original architecture of the College consisted of one very large building, College Hall, which was approximately 150 meters (490 ft) in length, and up to five stories in height. Until 1914, it was both a principal academic building and a principal residential building. On March 17, 1914 (in the third year of the presidency of Ellen Fitz Pendleton) College Hall was destroyed by fire. The precise cause of the fire was never officially established. The fire was first noticed by students who lived on the fourth floor near the zoology laboratory. It has been suggested that an electrical or chemical accident in this laboratory triggered the fire. In particular, the fire may have been started by an electrical incubator used in the breeding of beetles.

A group of student residence halls called the Tower Court Complex (made up of Claflin Hall, Severance Hall, and Tower Court) are located on top of the hill where the old College Hall once stood. Wellesley is also home to Green Hall, the only building bearing the name of famed miser, Hetty Green. Green Hall is home to Galen L. Stone Tower, in which is housed a 32-bell Carillon. 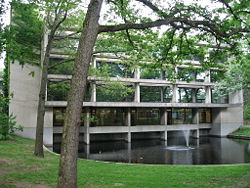 The college is renowned for the picturesque beauty of its 500-acre (2 km²) campus which includes Lake Waban, evergreen and deciduous woodlands and open meadows. Frederick Law Olmsted, Jr., Boston's preeminent landscape architect at the beginning of the twentieth century, described Wellesley's landscape as "not merely beautiful, but with a marked individual character not represented so far as I know on the ground of any other college in the country."

Classes at Wellesley range from 12 to 24 students in size, and there are approximately 9 students for every faculty member.[5]

The college also has a special program for non-traditionally aged women, called Davis Scholars. The program allows women who, for various reasons, were unable to start or complete a bachelor's degree, to attend Wellesley.

The College has approximately 170 student organizations, ranging from cultural and political organizations to community service, campus radio, and club sports. Leadership opportunities are plentiful whether in a formal role (like president of a student organization or a peer tutor or a first year mentor) or more informal (editor of a student publication or songmistress for one of Wellesley's many a cappella vocal groups).

All student organizations are approved by the Student Organizations and Appointments Committee (SOAC), which is chaired by the Vice President of College Government. Wellesley is unique in that student representatives participate as full voting members in many of the Academic Council, Board of Trustee, and other college committees. The students appointed to these committees are also selected by SOAC.

Nearly all students live on campus in one of the 21 residence halls. Some cooperative housing is available. Wellesley offers housing for Davis Scholars as well,[6] though not for their children or spouses, often causing great uproar on campus.[7]

As is the case with many colleges, especially the Seven Sisters, Wellesley College has many traditions. Each new fall semester is marked by a non-denominational service known as Flower Sunday. Upperclasswomen are matched up with first-years who become their "little sisters." On the morning of Flower Sunday, the older students give their little sisters flowers before the service. The "big sisters" often become friends and mentors to their "little sisters." While the service itself has changed over the years, today it consists of speeches made by the college president and deans, recitation of poetry, and several songs by the Wellesley College Choir. Additionally, student representatives from each of the many religious groups will present a short reading from their faith.

Hoop rolling is also a highly competitive tradition at the college. Each upperclasswoman has a wooden hoop, often passed down to her from her “big sister.” (Sometimes, a student purchases her hoop for ten dollars, from the Hoop, a student-run snackery.) Before graduation, the seniors, wearing their graduation robes, run a short race while rolling their hoops. The winner of the race is said to be the first woman in her class to achieve success however she defines it, though this title has changed through out time with periods including "to be the first CEO in her class" as well as other definitions. She is also awarded flowers by the college president, and then tossed into Lake Waban. The tossing of the winner into the lake began several decades ago when a Harvard University male, dressed as a Wellesley student, won the race. When, upon his victory, it was discovered that he was not a Wellesley student, he was thrown into the lake. The night before the race, many “little sisters” will camp out on the racecourse near the Library to save a good starting position for their “big sisters.”

Some other traditions include Step-singing, dorm and class crew races, Lake Day, and Marathon Monday. Each graduation class plants a tree during their sophomore year. “Class trees,” as they are called, can be found all over the campus, marked with each class’ year on a stone at the trees’ base.

Wellesley College’s crew team is known to be the first female collegiate crew team in the country. While today the team itself is a NCAA varsity sport, crew is widely experienced by many students by their participation in dorm and class crew regattas.

Step-singing is one of the college’s oldest traditions and occurs multiple times throughout the year. Each graduation class has their own color (purple, red, green, or yellow). Students dress in their class' color and sing songs on the steps of the chapel. In between some of the songs, the classes will shout cheers that make fun of the other classes.

Each fall, on a date that is not announced until the night before, students celebrate Lake day. The day consists of fun outdoor activities ranging from fried-dough stands to moonwalks and is deejayed by the college radio station.

One of the most popular traditions is the celebration of Marathon Monday which occurs on Patriots Day each spring, and is highlighted by the Boston Marathon. The marathon course passes the college, which marks its halfway point. Students line up along the street with posters and cheer for the runners. Since they are so loud, the students have created what is widely known as the “Wellesley Scream Tunnel.”

Every February, annually since 1970, three alumnae are honored at the Alumnae Achievement Awards for honoring themselves and Wellesley College through outstanding achievements in their respective fields. 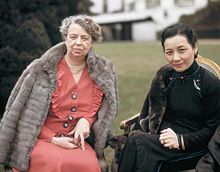 Soong May-ling (right) with Eleanor Roosevelt during a 1943 visit

Wellesley has a history of producing powerful women leaders in a variety of fields. Wellesley has produced a significant number of women who took top positions in Corporate America.[8]