Vassar College is a private, coeducational, liberal arts college situated in Poughkeepsie, New York. Founded as a women's college in 1861, it was the first member of the Seven Sisters to become coeducational. Vassar College is a leading undergraduate institution in the United States and the world. Vassar is consistently ranked among the top one percent of colleges and universities in the United States and has been a front runner in higher education for nearly a century and a half. Numerous external ratings have confirmed Vassar’s status as one of the most prestigious colleges in the United States.

For Vassar graduates, both men and women, to advance the world of peace, harmony, and prosperity that will bring true happiness to all humankind, however, attention must be paid not only to the mastery of knowledge and skills using the intellect, but also understanding of the heart and spirit of humankind.

Vassar was founded in 1861 to provide an education for women equal to that offered to men at the time. The school has since come to admit men and has grown to become one of the best colleges in America. The school is known for fostering close relationships between faculty and students that is usually associated with such small schools. 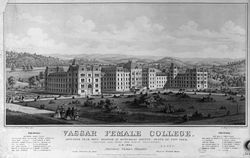 Vassar College in an engraving from 1862.

Matthew Vassar founded the school in 1861 to provide women an advanced education. The high standards of the school led to it being selected to house the first Phi Beta Kappa chapter at an all-women's school. The early years were shaped by astronomer Maria Mitchell, music historian Frederick Louis Ritter, and history professor Lucy Maynard Salmon who pioneered the use of seminars as a teaching method.

In its early years, Vassar was associated with the social elite of the Protestant establishment. E. Digby Baltzell wrote that "upper-class WASP families…educated their children at…colleges such as Harvard, Princeton, Yale, Vassar, and Smith among other elite colleges."[1]

Immediately following World War II, Vassar accepted a small number of male students under the G.I. Bill. The male students were awarded degrees from the State University of New York. Vassar adopted coeducation in 1969 after declining an offer to merge with Yale University.

Vassar's campus, also an arboretum, is 1,000 acres (four km²) marked by period and modern buildings. The great majority of students live on campus. The renovated library has unusually large holdings for a college of its size. It includes special collections of Albert Einstein, Mary McCarthy, and Elizabeth Bishop. 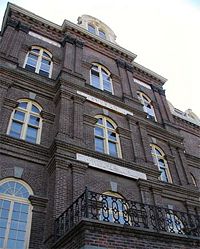 Closeup of the Vassar Main Building

The Vassar campus has several buildings of architectural interest. Main Building formerly housed the entire college, including classrooms, dormitories, museum, library, and dining halls. The building was designed by Smithsonian architect James Renwick Jr. and was completed in 1865. It is on the registry of national historic landmarks. Many beautiful old brick buildings are scattered throughout the campus, but there are also several modern and contemporary structures of architectural interest. Ferry House, a student cooperative, was designed by Marcel Breuer in 1951. Noyes House was designed by Finnish-American architect Eero Saarinen. A good example of an attempt to use passive solar design can be seen in the Mudd Chemistry Building by Perry Dean Rogers. More recently, New Haven architect César Pelli was asked to design the Lehman Loeb Art Center, which was completed in the early 1990s. In 2003, Pelli also worked on the renovation of Main Building Lobby and the conversion of the Avery Hall theater into the $25 million Vogelstein Center for Drama and Film, which preserved the original 1860s facade but was an entirely new structure.

The art collection at Vassar dates to the founding of the College, when Matthew Vassar provided an extensive collection of Hudson River School paintings to be displayed in the Main Building. Referred to as the Magoon Collection, it continues to be one of the best in the nation for Hudson River School paintings. The Frances Lehman Loeb Gallery displays a selection of Vassar's 17,000 articles of art in the building designed by Cesar Pelli.

Today, the gallery's collection displays art from the ancient world up through contemporary works. The collection includes work by European masters such Brueghel, Doré, Picasso, Balthus, Bacon, Vuillard, Cézanne, Braque, and Bonnard, as well as examples from leading twentieth-century American painters Jackson Pollock, Agnes Martin, Mark Rothko, Marsden Hartley, Georgia O'Keefe, Charles Sheeler, and Ben Shahn. The Loeb's works on paper represent a major collection in the United States, with prints by Rembrandt (including important impressions of the "Hundred Guilder Print" and the "Three Trees") and Durer as well as photographs by Cindy Sherman, Diane Arbus, and others. 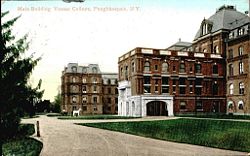 Roughly 2,400 students attend Vassar. Vassar confers the A.B. degree in more than 50 majors, including the Independent Major, in which a student may design a major, as well as various interdisciplinary and multidisciplinary fields of study. Students also participate in such programs as the Self-Instructional Language Program (SILP) which offers courses in Hindi, Irish/Gaelic, Korean, Portuguese, Swahili, Swedish, and Yiddish. Vassar has a flexible curriculum intended to promote breadth in studies. While each field of study has specific requirements for majors, the only universal requirements for graduation are proficiency in a foreign language, a quantitative course, and a freshman writing course.

Students are also strongly encouraged to study abroad, which they typically do during one or two semesters of their junior year. Students (usually juniors) may apply for a year or a semester away either in the U.S. or abroad. Vassar sponsors programs in China, England, France, Germany, Ireland, Italy, Mexico, Morocco and Spain; students may also join preapproved programs offered by other colleges. Students may also apply for approved programs at various U.S. institutions, including the historically Black colleges and members of the Twelve College Exchange.

All classes are taught by members of the faculty, and there are almost no graduate students and no teachers' assistants. The most popular majors are English, political science, psychology, and economics. Vassar also offers a variety of correlate sequences, or minors, for intensive study in many disciplines.

The Miscellany News has been the weekly paper of the college since 1866, making it one of the oldest college weeklies in the United States. It is available for free most Thursdays when school is in session.

Vassar competes in Division III of the NCAA, as a member of the Liberty League.

Basketball plays in the new Athletics and Fitness Center. Volleyball plays in Kenyon Hall, reopened in 2006. Soccer, Baseball, Field Hockey and Lacrosse all play at the Prentiss Fields by the Town Houses, which will be completely renovated starting in November 2006 to include new fields for all teams and a new track.

On April 28th and 29th, the Vassar Cycling Team hosted the Eastern Conference Championships in Collegiate Cycling in Poughkeepsie and New Paltz. The competition included a 98 mile road race over the Gunks in New Paltz as well as a Criterium in Poughkeepsie just blocks from the school's campus.

Vassar College has a strong reputation in theater through its Drama Department and its multiple student theater groups. The oldest theater group on campus is Philaletheis, which was founded in 1865 as a literary society. It has now become a completely student run theater group. Others include Unbound, Woodshed, and the Shakespeare troupe. Performances are done all over campus including in the Susan Stein Shiva Theater which is an all student run black box theater.

Vassar has a variety of notable alumni, including

Retrieved from https://www.newworldencyclopedia.org/p/index.php?title=Vassar_College&oldid=1087322
Categories:
Hidden category:
This page was last edited on 14 November 2022, at 16:22.
Content is available under Creative Commons Attribution/Share-Alike License; additional terms may apply. See Terms of Use for details.