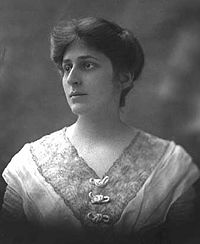 Crystal Eastman (June 25, 1881 – July 8, 1928) was an American lawyer, antimilitarist, feminist, socialist, and journalist. She was a co-founder of numerous social organizations, including American Union Against Militarism, National Woman's Party, Woman’s Peace Party, and the American Civil Liberties Union. While her ideas were in some cases extreme, her passion for civil liberties for all marks her as an example of those who dedicated their lives to the advancement of human society.

Crystal Eastman was born on June 25, 1881 in Marlborough, Massachusetts, into the family of Samuel Eastman and Annis Ford, who both were church ministers. Her brother was Max Eastman (1883–1969), a famous socialist writer and one of the leaders of the Harlem Renaissance. Crystal Eastman graduated from Vassar College, Poughkeepsie, New York in 1903, and received an M.A. in sociology from Columbia University in 1904. She was second in the class of 1907 at New York University Law School.

In 1907, social work pioneer and journal editor Paul Kellogg (1879-1958) offered Eastman her first job, investigating labor conditions for The Pittsburgh Survey, sponsored by the Russell Sage Foundation. This was the first in-depth sociological study of industrial accidents ever undertaken. Her report, Work Accidents and the Law (1910), became a classic and resulted in the first workers' compensation law, which she drafted while serving on a New York State commission. Eastman continued to campaign for occupational safety and health while working as an investigating attorney for the U.S. Commission on Industrial Relations during Woodrow Wilson's presidency.

In 1911, Eastman married Wallace Benedict and moved to Milwaukee. The marriage was troubled from the beginning, and after three years resulted in divorce. In 1913, Eastman became investigating attorney for the U.S. Commission on Industrial Relations, in which function she participated in the Seventh Congress of the International Woman Suffrage Alliance in Budapest, Hungary.

In 1913, after her return to the United States she joined, together with Lucy Burns, Doris Stevens (1892-1963), Helen Keller, Dorothy Day, Alice Paul, and other women activists, to form the Congressional Union for Woman's Suffrage (CUWS). They started to organize demonstrations and the daily picketing of the White House. Many of the women were jailed for "obstructing traffic." The organization changed its name in 1916 into the National Woman's Party.

After the outbreak of the World War I Eastman, Jane Addams, Lillian Wald (1867–1940), Paul Kellogg (1879-1958), Edith Abbott, Sophonisba Breckinridge, Oswald Garrison Villard (1872–1949), and other anti-war activists established the Woman’s Peace Party, to lobby against American involvement in the war. Eastman served as the executive director of the organization.

In 1916, she married British poet and antiwar activist Walter Fuller, with whom she had two children. In 1917, Eastman helped established the National Civil Liberties Bureau (NCLB), which in 1920 became the American Civil Liberties Union (ACLU).

After the war, Eastman organized the First Feminist Congress in 1919, and co-owned and edited a radical journal of politics, art, and literature, The Liberator, with her brother Max. At the same time she commuted between New York and London, where her husband worked.

Due to her involvement with radical and left-wing organization, during the First Red Scare of 1919-1921, she was blacklisted and thus rendered unemployable. She decided to move to join her husband in London, where she worked as a columnist for feminist journals, notably Equal Rights and Time and Tide. She participated in the campaign to get votes for women on the same terms as men.

After her husband died in 1927, Eastman returned to the United States. She was already in poor health and within ten months she died of a brain hemorrhage in New York City. She was 48-years-old.

Crystal Eastman was initiator and co-founder of numerous civil and political organizations. She believed that women should make their voices heard in legislation and therefore should have the right to vote. In 1913, Eastman joined Alice Paul, Lucy Burns, and others in founding the militant Congressional Union for Woman's Suffrage, which later became the National Woman's Party. The goal of the organization was to voice for women’s right to vote on the same terms as men and against employment discrimination. The party also opposed World War I.

Eastman helped found the Woman's Peace Party and was president of the New York branch. In 1915, Jane Addams became president of the Woman's Peace Party. Addams found Eastman to be too direct, and opposed her personal lifestyle and a practice of “casual sex.” It was known that Greenwich Village women supported birth control and had lovers, which was against the norms of that time. After divorcing her first husband to marry Walter Fuller, Eastman refused to accept alimony, criticizing the whole concept of alimony as nothing more than an admission of woman’s financial dependency on men. Eastman also worked with Emma Goldman (1869-1940) on the support of birth control, legalizing prostitution, and free speech during war times.

The Woman's Peace Party was renamed the Women's International League for Peace and Freedom in 1921, and remains the oldest extant women's peace organization. Eastman also carried the duty of executive director of the American Union Against Militarism, which lobbied against America's entrance into the European war and more successfully against war with Mexico in 1916. It also sought to remove profiteering from arms manufacturing, and campaigned against conscription and American imperialism in Latin America and the Caribbean.

When in 1917 the United States entered World War I, Eastman organized with Roger Nash Baldwin the National Civil Liberties Bureau to protect conscientious objectors, or in her words: To maintain something over here that will be worth coming back to when the weary war is over.

In 1919, worried that Communists would try to overthrow the American government, the attorney general A. Mitchell Palmer (1872-1936), launched a campaign against all radical and left-wing organizations in the United States. As the result, over 10,000 suspected communists and anarchists were arrested, many of them held in prison for a long period of time without trial. Hundreds were even deported to Russia, and many were put on a blacklist, unable to obtain legal employment. In 1920, Eastman and several other activists, among whom were included notable Americans Roger Nash Baldwin, Norman Thomas, Jane Addams, Florence Kelley, Lillian Wald, Felix Frankfurter, Paul Kellogg, Clarence Darrow, John Dewey, Charles Beard, Abraham Muste (1885-1967), Elizabeth Gurley Flynn, and Upton Sinclair, decided to raise their voice against government persecution of people for their political beliefs. They established the American Civil Liberties Union (ACLU), which was the extension of the National Civil Liberties Bureau. The organization had as its main goal to speak up for civil rights:

After women won the right to vote in 1920, Eastman and three others wrote the Equal Rights Amendment (ERA) introduced in 1923. The purpose of the amendment was to guarantee equal rights under the law for Americans regardless of gender. The initiative created great opposition, and the amendment never reached the floor of either the Senate or the House of Representatives for a vote. Eastman claimed that one could assess the importance of the ERA by the intensity of the opposition to it, but she felt that “this is a fight worth fighting even if it takes ten years.” The amendment has finally passed in 1972. Opponents of the amendment, which included other suffragist groups and women’s movements, criticized it from the perspective that it would eliminate numerous protective legislation that gave favored treatment to women workers. They claimed that women should not be forced to compete with men and thus any government support is welcomed.

Crystal Eastman has been called one of the United States' most neglected leaders, because, although she wrote pioneering legislation and created long-lasting political organizations, she disappeared from history for fifty years. Her significance however reemerged in the 1970s and 1980s with the discussion on the Equal Rights Amendment in the Congress, and with the rewriting of the history of the feminist movement, free of the "Communist" label.

Eastman fought for peace, equal rights, and civil liberties for all, and was co-founder of numerous civil and political organizations. While working on the New York State's Commission on Employers' Liability, Eastman helped draft the nation's first workers' compensation law, which became a model for workers' compensation throughout the nation. Eastman helped established the National Civil Liberties Bureau (NCLB), which under the name American Civil Liberties Union (ACLU) still functions today. She was also on the founding committee of the Woman's Peace Party, which became the Women's International League for Peace and Freedom, and is the nation's oldest women's peace organization.