Norman Mattoon Thomas (November 20, 1884 – December 19, 1968) was a leading American socialist and pacifist. He was an ordained minister who opposed U.S. involvement in both World War I and World War II (finally supporting the latter conflict only after the Japanese attack on Pearl Harbor). He founded the magazine The World Tomorrow and was an associate editor of The Nation. He also participated in several organizations that shared his beliefs. He was a candidate for the offices of Governor of New York and Mayor of New York City, and a six-time presidential candidate for the Socialist Party of America from 1928 to 1948.

He believed steadfastly in the principles that he attested to. He was a stalwart of socialism who opposed communism to its core. Thomas was eager to explain the differences between the two to an audience of any size. He was committed to upholding and espousing his beliefs throughout his personal and political life. Even though many people consider World War II as a necessary evil because Adolf Hitler's ambitions could not be contained, the reluctance of a man such as Thomas to support the war serves as a caution that armed conflict can only ever be morally justified as a last resort, and should never be entered into lightly however just the cause appears to be.

He then attended Union Theological Seminary, and there became a socialist. He was ordained as a Presbyterian minister in 1911, shunning the Park Avenue churches and ministering instead to an Italian Protestant church in New York's East Harlem. Union Theological Seminary was then a center of the Social Gospel movement and liberal politics, and as a minister, Thomas preached against American participation in the First World War.

This pacifist stance led to his being shunned by many of his fellow alumni from Princeton, and opposed by some of the leadership of the Presbyterian Church in New York.

Thomas opposed the United States' entry into the First World War. It was his position as a conscientious objector that drew him to the Socialist Party of America (SPA), a staunchly anti-militarist organization. When SPA leader Morris Hillquit made his campaign for mayor of New York in 1917 on an antiwar platform, Thomas wrote to him expressing his good wishes. To his surprise, Hillquit wrote back, encouraging the young minister to work for his campaign, which Thomas energetically did. Soon thereafter he himself joined the Socialist Party.[2]

He founded the magazine publication The World Tomorrow in January, 1918, and later, from 1921-1922, he was associate editor of The Nation.

Following Eugene Debs' death in 1926, Thomas became the Socialist standard-bearer and was the party's Presidential nominee in every election from 1928 to 1948. As an articulate and engaging spokesman for democratic socialism, Thomas' influence was considerably greater than that of the typical perennial candidate. Although socialism was viewed as an unsavory form of political thought by most middle-class Americans, the well–educated Thomas, who often wore three piece suits, looked like and talked like a president and gained grudging admiration.

Thomas frequently spoke on the difference between socialism and Communism, and explaining the differences between the movement he represented and that of revolutionary Marxism. He had an early admiration for the Russian Revolution that subsequently turned into devout anti-Communism. (The revolutionaries thought him no better; Leon Trotsky, on more than one occasion, leveled high-profile criticism at Thomas.) He wrote several books, among them his passionate defense of World War I conscientious objectors, Is Conscience a Crime?, and his statement of the 1960s social democratic consensus, Socialism Re-examined. 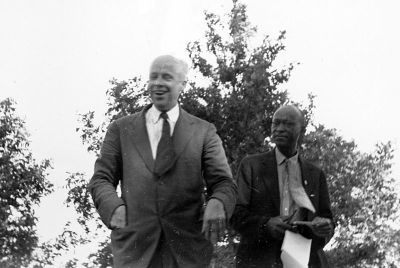 Thomas was as outspoken in opposing the Second World War as he was the first, and served on the board of the America First Committee. However, once the United States was attacked by the Japanese in Pearl Harbor, his stance changed to support for US involvement. He and his fellow democratic socialists were also some of the only public figures to oppose the internment of Japanese Americans following the attack on Pearl Harbor at a time when virtually every public figure and government official approved of it. Thomas loudly condemned the ACLU for "dereliction of duty" when the organization supported the internment. Thomas was also a pioneer in his campaigning against racial segregation, war, environmental depletion, anti-labor laws and practices, and for his efforts to try to open up the United States to Jewish victims of Nazi persecution in the 1930s.

After 1945 Thomas made the non-Communist left the vanguard of social reform, in collaboration with labor leaders like Walter Reuther. He championed many seemingly unrelated progressive causes, while leaving unstated the essence of his political and economic philosophy. From 1931 until his death, to be a "socialist" in the United States meant to support those causes which Norman Thomas championed.[3]

Thomas was a lifelong socialist and pacifist. He was opposed to communism and was quick to point out what made it so different from socialism. Thomas took a firm stand against war and championed a barrage of other causes. Many of his efforts were humanitarian in nature. He was outspoken in his efforts and would campaign fervently for his agenda. He is remembered for his strong political and moral stance and his attempts to garner wider public support for it.

The Norman Thomas High School in Manhattan and the Norman Thomas '05 Library at Princeton University's Forbes college are named after him. He is also the grandfather of Newsweek columnist Evan Thomas.

Retrieved from https://www.newworldencyclopedia.org/p/index.php?title=Norman_Thomas&oldid=1087578
Categories:
Hidden category:
This page was last edited on 16 November 2022, at 02:47.
Content is available under Creative Commons Attribution/Share-Alike License; additional terms may apply. See Terms of Use for details.