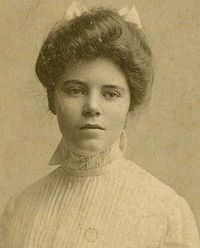 Alice Stokes Paul (January 11, 1885—July 9, 1977) was the architect of some of the most outstanding political achievements on behalf of women in the 20th century. She was an American suffragist leader. Along with Lucy Burns (a close friend) and others, she led a successful campaign for women's suffrage that resulted in granting the right to vote to women in the U.S. federal election in 1920.

Alice was born to William and Tacie Paul on January 11, 1885, a Quaker family living on the family farm in Mount Laurel, New Jersey. William was a banker and businessman, serving as president of the Burlington County Trust Company. Alice had two brothers, William Jr. and Parry, and a sister, Helen. As Hixsite Quakers, the family believed in gender equality, education for women, and working for the betterment of society. Tacie often brought Alice to women's suffrage meetings that she attended .

In 1901, she graduated first in her class from the Moorestown Friends School. She later attended Swarthmore College (BA, 1905), the New York School of Philanthropy (social work), and the University of Pennsylvania (MA, sociology). In 1907, Paul moved to England where she attended the University of Birmingham and the London School of Economics (LSE). Returning to the United States in 1910, she attended the University of Pennsylvania, completing a PhD in political science in 1912. Her dissertation topic was: The Legal Position of Women in Pennsylvania. In 1927, she received a Masters of Legal Law (LLM) degree followed by a Doctor of Civil Law degree in 1928, both from American University's Washington College of Law.

While she was in England in 1908, Paul heard Christabel Pankhurst speak at the University of Birmingham. Inspired, Paul joined the Women's Social and Political Union (WSPU), where she met fellow American Lucy Burns. Her activities with the WSPU led to her arrest and imprisonment three times. Along with other suffragists she went on hunger strike and was force-fed.

In 1912, Alice Paul joined the National American Women's Suffrage Association (NAWSA) and was appointed Chairman of their Congressional Committee in Washington, DC. After months of fundraising and raising awareness for the cause, membership numbers went up and, in 1913, Alice Paul and Lucy Burns formed the Congressional Union for Women Suffrage. Their focus was lobbying for a constitutional amendment to secure the right to vote for women. Such an amendment had originally been sought by suffragists Susan B. Anthony and Elizabeth Cady Stanton in 1878. However, by the early twentieth century, attempts to secure a federal amendment had ceased. The focus of the suffrage movement had turned to securing the vote on a state-by-state basis. When their lobbying efforts proved fruitless, Paul and her colleagues formed the National Woman's Party (NWP) in 1916, and began introducing some of the methods used by the suffrage movement in Britain. Alice organized the largest parade ever seen on March 3, 1913, the eve of President Woodrow Wilson’s inauguration. Women from all walks of life and all different age groups dressed in white suffragists outfits and marched down Pennsylvania Avenue with banners and riding floats. The parade began at the Capitol proceeding to the White House. Their destination was the Daughters of the American Revolution's Constitution Hall. Police stood by to help control the estimated half million people. The police finally stepped in when the verbal abuse became unbearable. They made their destination after a long six hour journey.

Alice Paul was quoted as saying outside the White House: “Mr. President, how long must women wait to get their liberty? Let us have the rights we deserve.”

For weeks after this historic parade, newspapers reported politicians demanding investigations into police practices in Washington, and commentaries on the bystanders. The publicity opened the door for the Congressional Committee to lobby congressmen, and the president. President Wilson finally agreed to meet with the suffragists on March 17. He stated he was not knowledgeable enough to make any decisions at that time. They were however, granted two additional meetings in March. On the opening day of the new Congress in April that year, Alice organized another demonstration. Later in April, Alice established the Congressional Union for Woman Suffrage (CUWS), sanctioned by NAWSA and dedicated to achieving the federal amendment. By June, the Senate Committee on Women's Suffrage reported favorably on the amendment and senators prepared to debate the issue for the first time since 1887.

After the election, Paul and the NWP campaigned against the continuing refusal of President Woodrow Wilson and other incumbent Democrats to actively support the Suffrage Amendment. In January 1917, the NWP staged the first political protest ever to picket the White House. The picketers, known as "Silent Sentinels," held banners demanding the right to vote. This was an example of a non-violent civil disobedience campaign. In July 1917, picketers were arrested on charges of "obstructing traffic." Many, including Paul, were convicted and incarcerated at the Occoquan Workhouse in Virginia (now the Lorton Correctional Complex) and the District of Columbia Jail.

In protest of the conditions in Occoquan, Paul commenced a hunger strike. This led to her being moved to the prison’s psychiatric ward and force-fed. Other women joined the strike, which combined with the continuing demonstrations and attendant press coverage, kept the pressure on the Wilson administration. In January, 1918, the president announced that women's suffrage was urgently needed as a "war measure."

In 1920, the Nineteenth Amendment to the United States Constitution secured the vote for women.

Paul was the original author of a proposed Equal Rights Amendment to the Constitution in 1923. She opposed linking the ERA to abortion rights, as did most early feminists. It has been widely reported that Paul called abortion "the ultimate exploitation of women." Although no documentation of Alice Paul's actual views exist apart from the Suffragist Oral History Project, according to Pat Goltz, Feminists for Life co-founder, who spoke with her in the late seventies, and Evelyn Judge, a life long friend, Alice Paul did indeed oppose abortion, and even referred to it once as "killing unborn women."

Once again when World War II began in Europe, Alice Paul took care of people in need. The WWP headquarters became a refuge for people escaping the Nazi terror. She also helped them find American sponsors, get passports and travel safely to the U.S. However, in the spring of 1941, with Nazi restrictions imposed, the WWP relocated to Washington, D.C.

Alice continued to campaign for women's rights and in 1938, founded the World Party for Equal Rights for Women (also known as the World Women's Party). Paul also successfully lobbied for references to sex equality in the preamble to the United Nations Charter and in the 1964 Civil Rights Act. The NWP was the only women's organization to fight for this inclusion.

Alice never married, committing herself to a life of causes. When she returned to the United States in 1941, she lived with her sister Helen and later after her sister died she resided with her friend and fellow activist Elsie Hill. Alice moved to Alta Craig Nursing Home in Ridgefield, Connecticut after the death of Elsie in the 1960s. She still participated in rallies for women's rights and against the Vietnam War up into her eighties.

Alice Muller, a friend of Alice Paul heard of her living all alone in Connecticut and immediately stepped in to bring closer to friends and loved ones. Alice was moved to the Greenleaf Extension Home in Moorestown, New Jersey an institution her family had endowed many years earlier. The Mullers visited her there. In 1974, she suffered a stroke that left her disabled. On July 9, 1977, Alice died of heart failure. She was 92 years old.

Alice Paul left a legacy to all women with the NWP. That organization continues to fight for ratification of the ERA and other women's rights issues. On June 26, 1997, after seventy five years, a Congressional Resolution, and $75,000 raised by the National Museum of Women's History the statue of the suffrage leaders was returned to the Rotunda of the U.S. Capitol.