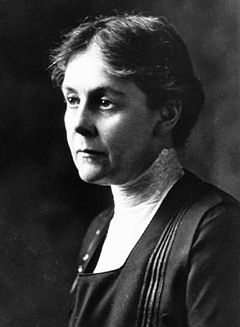 Alice Hamilton (February 27, 1869 – September 22, 1970) was the first woman appointed to the faculty of Harvard Medical School. She was a leading expert in the field of occupational health, and a pioneer in the field of industrial toxicology. Her studies of occupational illnesses and the dangerous effects of industrial metals and chemical compounds on the human body mark a respected and long career of public investigation regarding the hazards of industrial workplaces. Honored with several awards, both during her long life and posthumously, Hamilton's work greatly advanced the quality of life of working people as well as the general public, and thus constitutes a major step in the establishment of a more ideal human society for all people.

Alice Hamilton was born in Fort Wayne, Indiana on February 27, 1869 to Montgomery and Gertrude Hamilton. Alice was the second of four girls and one boy, all of whom remained close throughout their childhood and professional careers. Her sister, Edith, would later become a famous author, publishing The Greek Way (1930) and other works about classical culture. Though Alice was home schooled, she completed her early education at Miss Porter's School in Farmington, Connecticut. In hopes of becoming a medical doctor, Alice spent the summer after her graduation from Miss Porter’s School being tutored in the subjects of chemistry and physics. Upon completion of her studies, Alice entered the University of Michigan Medical School where she focused on the field of pathology.

In 1893, Alice received her doctor of medicine degree from the University of Michigan Medical School. She then completed internships at the Minneapolis Hospital for Women and Children and the New England Hospital for Women and Children before setting out for Germany, where she hoped to further pursue her professional career. From 1895 to 1897, Alice studied bacteriology and pathology at universities in Munich and Leipzig, later finding work alongside bacteriologist Carl Weigert. Upon her return to the United States, she began work as a research assistant at Johns Hopkins Medical School where she worked under pathologist Simon Flexner, the first director of the Rockefeller Institute of Medical Research.

In 1897, Alice Hamilton accepted a position as professor of pathology at Northwestern University’s Women’s Medical School in Chicago, Illinois. She also worked with Chicago’s Memorial Institute for Infectious Diseases while taking residence at Jane Addams' Hull House, the first settlement house to be established in America. There, she worked alongside similar progressive figures including Alzina Stevens, Florence Kelley, and Sophonisba Breckinridge, and lived among the poor residents of the surrounding Chicago community.

Hamilton became increasingly interested in the problems faced by industrial workers, especially those causing occupational injury and illness. The study of industrial medicine, which aimed at identifying the illnesses caused by certain jobs, had become increasingly important since the Industrial Revolution of the late nineteenth century had led to new dangers in the workplace.

In 1907, Hamilton began exploring existing literature from abroad regarding industrial medicine, and found that such data were not being seriously considered in America. Setting out to change this, she used her medical training to examine causes for the outbreaks of typhoid fever and tuberculosis which plagued the surrounding low-income communities of Hull House. She identified poor working conditions as leading to weakened immune systems, which led to the further spread of infectious diseases in the workplace. This finding led to her 1908 appointment to the Illinois Commission on Occupational Diseases, the first such investigative body in the United States. There she sought to examine the health of workers and industrial working conditions throughout the state, and investigated a range of similar issues for a variety of state and federal health committees.

In 1911, she began working as a special investigator for the Department of Labor, where she identified the use of lead toxins within the paint industry. Her findings introduced awareness of the dangers of lead poisoning for both adults and children in the workplace and at home. Throughout World War I, at the request of the National Research Council, Hamilton also investigated the poisonous effects of explosive manufacturing on workers.

Due to her accomplished background, in 1919 Hamilton was hired as an assistant professor in the new Department of Industrial Medicine at Harvard Medical School. This appointment made her the first woman to serve on the faculty there. A New York Tribune article celebrated the appointment with the dramatic headline: "A Woman on Harvard Faculty—The Last Citadel Has Fallen—The Sex Has Come Into Its Own.” Despite her qualifications, Hamilton faced continual discrimination as a woman in the workplace, and was excluded from various social activities and the all-male graduation procession.

After her retirement from Harvard in 1935, Hamilton served as a medical consultant to the U.S. Division of Labor Standards, and retained her connections to Harvard as professor emerita. She died in 1970 at the age of 101.

Throughout her professional career, Alice Hamilton was successful at garnering the attention of the U.S. government towards the poisonous effects of workplace toxins such as aniline dyes, carbon monoxide, mercury, radium, and hydrogen sulfide. At the 1925 Tetraethyl Lead conference in Washington D.C., Hamilton was the most prominent critic of adding tetraethyl lead to gasoline. A figure of controversy to the end, Hamilton’s activities were closely monitored by the U.S. Federal Bureau of Investigation (FBI) well into her nineties.

Her active concern for the betterment of working conditions led her to advocate for individual civil liberties. She served as the only female member of the League of Nations Health Committee from 1924–1930. Throughout her professional career, Hamilton also retained close ties to the Hull House community, returning to the Chicago neighborhood each year until Jane Addams’ death in 1935.

In 1947, Hamilton received the Albert Lasker Public Service Award, "for her contribution to the prevention of occupational diseases, and the improvement of workers' health." She was also recognized posthumously for her accomplishments. In 1995, her extensive contributions to public health were commemorated by a U.S. postage stamp. In 2002, her work in the Development of Occupational Medicine was declared a historical chemical landmark. The plaque commemorating the event reads:

In 1897, Dr. Alice Hamilton (1869-1970) came to Hull House, a social settlement founded to address the needs of immigrants living on Chicago’s Near West Side. Through living and working in the Hull-House neighborhood, she identified occupational diseases plaguing those who worked in the "dangerous trades:" rubber, dyes, lead, enamelware, copper and mercury production, and explosives and munitions. Collaborating with the U.S. Department of Labor, Hamilton documented the occupational diseases from which these workers suffered. Her reports on the effect of lead on industrial workers, particularly women, established her as a leader in the field of chemical health and safety.

Retrieved from https://www.newworldencyclopedia.org/p/index.php?title=Alice_Hamilton&oldid=994413
Categories:
Hidden category:
This page was last edited on 7 March 2016, at 21:46.
Content is available under Creative Commons Attribution/Share-Alike License; additional terms may apply. See Terms of Use for details.