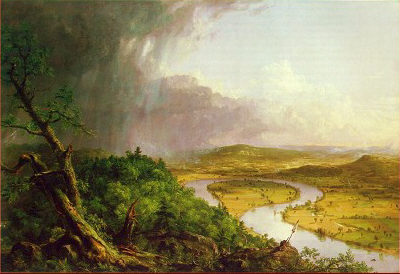 Thomas Cole's View from Mount Holyoke, Northampton, Massachusetts, after a Thunderstorm, or The Oxbow, 1836

The Hudson River School was a mid-nineteenth century American art movement that was coined around a loosely connected group of landscape painters, whose aesthetic vision was influenced by romanticism. The representative paintings depict the Hudson River Valley and the surrounding area, as well as the Catskill Mountains, Adirondack Mountains, and White Mountains of New Hampshire. The artistic philosophy has been described as "being rooted in religious environmentalism." Although the members of the group varied in their religious convictions and maybe never met one another, overall they borrowed heavily from the social idealism of the transcendentalists.

Hudson River School artists believed that nature in the form of the American landscape was an "ineffable manifestation of God."[1] In his "Essay on American Scenery" for the American Monthly Magazine, Thomas Cole wrote, "American Scenery is a subject that to every American ought to be of surpassing interest; for, whether he beholds the Hudson mingling waters with the Atlantic, explores the central wilds of this vast continent, or stands on the margin of the distant Oregon, he is still in the midst of American scenery—it is his own land; its beauty, its magnificence, its sublimity—all are his; and how undeserving of such a birthright, if he can turn towards it an unobserving eye, an unaffected heart!"

The Hudson River School, like other groups such as the "The Ashcan School" or the "Brandywine School," refers not to a particular learning institution, but to a movement of artists whose outlook, inspiration, output, and style demonstrates a common theme. Well known artists of the group include Asher B. Durand, John Frederick Kensett, Samuel F. B. Morse, Henry Inman, Jasper Cropsey, Frederick Edwin Church, and George Inness.

The originator of the term, "Hudson River School" is not entirely certain. It is thought to have originated either with New York Tribune art critic, Clarence Cook, or the landscape painter Homer D. Martin (Howat, pages 3-4). Initially, as with the Fauvists, the term was applied derisively.

Hudson River School paintings reflect three themes of America in the nineteenth century: Discovery, exploration, and settlement. The paintings also depict the American landscape as a pastoral setting, where human beings and nature coexist peacefully. Hudson River School landscapes are characterized by their realistic, detailed, and sometimes idealized portrayal of nature. In general, they took as their inspiration such European masters as Claude Lorrain, John Constable, John Martin, and J.M.W. Turner, and shared a reverence for America's natural beauty with contemporary American writers such as Henry David Thoreau, William Cullen Bryant, and Ralph Waldo Emerson. The philosophy that shaped their art is expressed by the following sentiments:

While the elements of the paintings are rendered very realistically, many of the actual scenes are the synthesized compositions of multiple scenes or natural images observed by the artists. In gathering the visual data for their paintings, the artists would travel to extreme environments or locales, presenting the artists with unique challenges. During these expeditions, sketches and memories would be recorded and the paintings would be rendered later, upon the artists' safe return home.

Did you know?
The Hudson River School artists intended their paintings to celebrate the presence of God

At the height of the movement in the 1840s, these paintings were meant to celebrate the presence of God in nature. In keeping with the tenets of Romanticism, these artists saw the natural American environment as a source for divine expressions. By the end of the nineteenth century, interest in the Hudson River School declined, and the new paintings were considered old-fashioned. Artistic aims and techniques were changing. Part of the reason, doubtless, was a decline in Romanticism in its transcendentalist American form, which intellectuals had for a time adopted as the American ethos. A new aesthetic developed in France, the Barbizon school began to challenge the Hudson River painters. One artist, George Inness, bridged the shift. Artists continued to seek majesty and refreshment in nature; but they sought a freer and more personally experimental rendering of natural scenery.

However, after World War I, there was a renewal of interest, sparked by patriotism, and these American landscapes were viewed as evidence of the simplicity and independence of life in the United States, symbolizing American strength and individualism. The purity of most Hudson River School paintings was bathed in the light of Manifest Destiny, a concept that would actually evolve a bit later when a second generation of Hudson River School artists such as Albert Bierstadt and Thomas Moran.[2]

Following World War II, as America became the center for modern and abstract art, the nineteenth century landscapes again lost their appeal. The 1960s and 1970s brought renewed appreciation for these Hudson River School paintings as contemporary artists and historians, concerned for America's natural environment, saw the paintings as reminders of a lost pre-industrial paradise. Environmentalists used the Hudson River landscapes to inspire people to embrace the "back to the earth" movement.[3]

The artist Thomas Cole is generally acknowledged as the founder of the Hudson River School. Cole took a steamship up the Hudson in the autumn of 1825, the same year the Erie Canal opened, stopping first at West Point, then at Catskill Landing, where he ventured west high up into the eastern Catskill Mountains of New York State to paint the first landscapes of the area. The first review of his work appeared in the New York Evening Post on November 22, 1825.[4] Cole initiated a unique perspective of the area displayed in his renditions of monochromatic green landscapes, and the uniquely brilliant autumn hues of the area. By comparison, only twenty one years earlier, John Vanderlyn painted The Death of Jane McCrea, symbolizing how dangerous rural areas of New York State could be; but now a new, more idealized and peaceful view of the area was emerging through the work of Hudson River School artists.[5]

Asher B. Durand, the leader of the group after Cole's death, painted Kindred Spirits, the year following his death. It shows an idealized painting of Thomas Cole with friend William Cullen Bryant on a rock ledge overlooking Kaaterskill Falls. Durand has said of Hudson River School artists that they used a "divine visual language" whose vocabulary would come to be the crashing waterfalls and rippling streams, a favored motif of theirs.[6] The "second generation" of Hudson River school artists emerged to prominence after Cole's premature death in 1848, including Cole's prize pupils Frederic Edwin Church, John Frederick Kensett, and Sanford Robinson Gifford. Works by artists of this second generation are often described as examples of Luminism, or the Luminist movement in American art. In addition to pursuing their art, many of the artists, including Kensett, Gifford, and Church, were founders of the Metropolitan Museum of Art in New York City.[7] 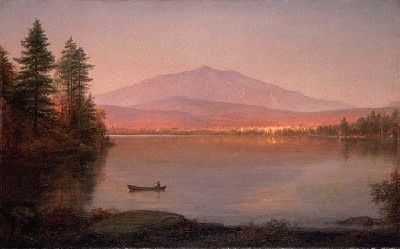 Most of the finest works of the Hudson River school were painted between 1855 and 1875. During that time, artists like Frederic Edwin Church and Albert Bierstadt were treated like major celebrities. When Church exhibited paintings like Niagara or Icebergs of the North, thousands of people would line up and pay fifty cents to view his work. The epic size of the landscapes in these paintings reminded Americans of the vast, untamed, but magnificent wilderness areas in their own locales, and their works helped inspire movements to settle the American West, preserve national parks, and create city parks.

The Hudson River School artists were criticized by later groups of artists, particularly the Pre-Raphaelites, for overstatement and anthropocentrism. Their landscapes, in their grandiose floridness, were criticized for exemplifying "a world not to be lived in but only to be looked at." They were said to have rearranged visual details in the interest of their spiritual message, but at the sacrifice of realism.[6]

One of the largest collections of paintings by artists of the Hudson River School is at the Wadsworth Atheneum in Hartford, Connecticut. Some of the most notable works in the Atheneum's collection are thirteen landscapes done by Thomas Cole, and eleven by Hartford native Frederic Edwin Church, both of whom were personal friends of the museum's founder, Daniel Wadsworth. Other important collections of Hudson River School art can be seen at the Metropolitan Museum of Art and the New-York Historical Society, both in Manhattan, NY; the Brooklyn Museum in Brooklyn, NY; the National Gallery of Art in Washington, DC; the Gilcrease Museum in Tulsa, Oklahoma; the Newark Museum in Newark, NJ; and the Westervelt Warner Museum of American Art in Tuscaloosa, Alabama.

Retrieved from https://www.newworldencyclopedia.org/p/index.php?title=Hudson_River_School&oldid=1058285
Categories:
Hidden category:
This page was last edited on 29 September 2021, at 23:21.
Content is available under Creative Commons Attribution/Share-Alike License; additional terms may apply. See Terms of Use for details.