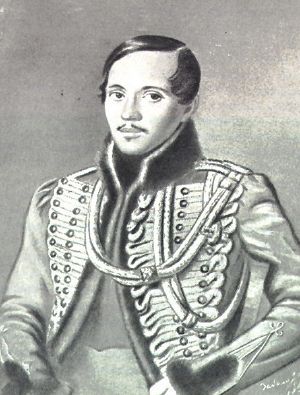 Mikhail Yur'yevich Lermontov (Михаил Юрьевич Лермонтов), (October 15, 1814 – July 27, 1841), was a Russian Romantic writer and poet, sometimes called "the poet of the Caucasus." He was the most important presence in Russian poetry from the time of Alexander Pushkin's death until his own four years later, at the age of 26—like Pushkin, the casualty of a duel. In one of his best-known poems, written on January 1, 1840, he described his intonations as "iron verse steeped in bitterness and hatred." Lermontov was something of an awkward personality. He seems to have affected the Romantic pose of disinterested boredom, much like the main character of his famous novel, A Hero of Our Time. But he was rather unpolished in his personal behavior. Still, his poetry is among the most beloved in Russia, perhaps second only to that of Pushkin himself.

Lermontov was born in Moscow to a respectable family of the Tula province, and grew up in the village of Tarkhany (in the Penza government), which now preserves his remains. His family traced descent from the Scottish Learmounts, one of whom settled in Russia in the early seventeenth century, during the reign of Michael Fedorovich Romanov.

The family estate of Lermontov's father was much more modest than his mother's, so his father, Yuri Lermontov, like his father before him, entered military service. Having moved up the ranks to captain, he married the sixteen-year-old Mariya Arsenyeva, to the great dismay of her mother, Elizabeth Alekseevna. A year after the marriage, on the night of October 3, 1814, Mariya Arsenyeva gave birth to Mikhail Lermontov. Tension between Yuri and his maternal grandmother persisted. Soon after Lermontov's birth, Mariya Arsenyeva fell ill and died in 1817. After her daughter's death, Elizabeth Alekseevna devoted all her care and attention to the child and his education, all the time fearing that his father might sooner or later run off with him. In this environment of his grandmother's pampering and continuing family tension, Lermontov developed into a precocious, sensitive youth with a fearful temper, which he proceeded to take out on the servants and the bushes in his grandmother's garden.

The intellectual atmosphere in which he was raised differed little from that of Pushkin, though the domination of French, the language of the Russian aristocracy, receded in favor of a growing interest in English, and Lamartine occupied this interest along with Byron. In his early childhood Lermontov was educated by a certain Frenchman named Gendrot; but Gendrot was a poor pedagogue, so Elizabeth Alekseevna decided to take Lermontov to Moscow to prepare him better for the gymnasium. In Moscow, Lermontov was introduced to Goethe and Schiller by a German pedagogue, Levy, and a short time after, in 1828, he entered the gymnasium. He showed himself to be an incredibly talented student, once completely stealing the show at an exam by, first, impeccably reciting some poetry, and second, successfully performing a violin piece. At the gymnasium he also became acquainted with the poetry of Pushkin and Zhukovsky. One of his friends, Catherine Hvostovaya, later described him as "married to a hefty volume of Byron." This friend had at one time been an object of Lermontov's affection, and to her he dedicated some of his earliest poems, including some that showed his promise, like "Нищий (У врат обители святой)" (The Beggar). At that time, together with Lermontov's poetic passion, an inclination for poisonous wit and cruel and sardonic humor also developed. His ability to draw caricatures was matched by his ability to shoot someone down with a well-aimed epigram or nickname.

After the academic gymnasium Lermontov entered Moscow University in August of 1830. That same summer the final, tragic act of the family discord played out. Having been struck deeply by his son's alienation, Yuri Lermontov left the Arseniev house for good, and died a short time later. His father's death was a terrible loss for Lermontov, as is evidenced by a couple of his poems: "Forgive me, Will we Meet Again?" and "The Terrible Fate of Father and Son."

Lermontov's career at the university was very abrupt. He spent two years there but received no degree. While there, he was remembered for his aloofness and arrogant disposition; he attended the lectures rather faithfully, often reading a book in the corner of the auditorium, but rarely took part in student life.

Like his father before him, he decided to enter the military. From 1832 to 1834 he attended the School of Calvary Cadets at St. Petersburg, receiving his commission in the hussars of the guard after graduation. By all accounts for the next several years he lived a dissolute life. His poetry was imitative of Pushkin and Byron. He also took a keen interest in Russian history and medieval epics, which would be reflected in The Song of the Merchant Kalashnikov, his long poem Borodino, poems addressed to the city of Moscow, and a series of popular ballads.

The young soldier gave vent to his own and the nation's anger at the loss of Pushkin (1837) in a passionate poem addressed to tsar Nicholas I of Russia, entitled the "Death of a Poet." The poem proclaimed that, if Russia took no vengeance on the assassin of her poet, no second poet would be given her, (while demonstrating that such a poet had, indeed, arrived). The poem all but accused the powerful "pillars" of Russian high society of complicity in Pushkin's murder. Without mincing words, it portrayed this society as a cabal of venal and venomous wretches "huddling about the Throne in a greedy throng…the hangmen who kill liberty, genius, and glory" about to suffer the apocalyptic judgment of God. The tsar, not surprisingly, responded to this insult by having Lermontov court-marshaled and sent to a regiment in the Caucasus. 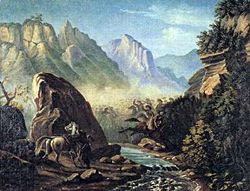 This punishment returned him to the place that he had first visited with his grandmother as a boy of ten. It was in that stern and rocky landscape of the Caucasus Mountains that he found his own native land.

Lermontov visited St. Petersburg in 1838 and 1839. His indignant observations of the aristocratic milieu, where he was welcomed by fashionable ladies as a kind of celebrity, occasioned his play Masquerade. His unreciprocated attachment to Varvara Lopukhina was recorded in the novel Princess Ligovskaya, which he never finished.

Back in the Caucasus

His duel with a son of the French ambassador led to his being returned to the Caucasian army, where he distinguished himself in hand-to-hand fighting near the Valerik River. By 1839 he completed his only full-scale novel, A Hero of Our Time, which prophetically describes the duel in which he lost his life in July 1841. In this contest he had purposely selected the edge of a precipice, so that if either combatant was wounded enough to fall, his fate would be sealed. Characteristically, much of his best verse was posthumously discovered in his pocket-book.

During his lifetime, Lermontov published only one slender collection of poems (1840). Three volumes, much mutilated by the censorship, were issued a year after his death. His short poems range from indignantly patriotic pieces like “Fatherland” to the pantheistic glorification of living nature (e.g., “I Go Out to the Road Alone...”). Lermontov's early verse is generally regarded as juvenile, dexterous in its command of the language, but more appealing to adolescents than to adults. But that typically romantic air of disenchantment was an illusion of which he was all too conscious. Quite unlike Shelley, with whom he is often compared, he attempted to analyze and bring to light the deepest reasons for this metaphysical discontent with society and himself (e.g., “It's Boring and Sad...”). 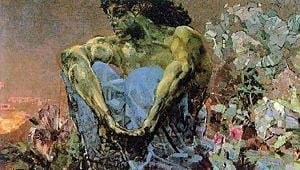 Mikhail Vrubel's illustration to the Demon (1890).

Both patriotic and pantheistic veins in his poetry had immense influence on later Russian literature. Boris Pasternak, for instance, dedicated his 1917 poetic collection of signal importance to the memory of Lermontov's Demon, a longer poem featuring some of the most mellifluent lines in the language, which Lermontov rewrote a number of times until his death. The poem, which celebrates carnal passions of the "eternal spirit of atheism" to a "maid of mountains", was banned from publication for decades. Anton Rubinstein's lush opera on the same subject was also banned by censors who deemed it sacrilegious.

His only novel, A Hero of Our Time, makes Lermontov one of the founding fathers of the Russian prose. Bearing a resemblance to Pushkin's Tales of Belkin, it is actually a loosely knitted collection of short stories revolving around a single character, Pechorin. Its five stories are all written in a different narrative and literary style, yet the stories are intricately connected, each offering a glimpse into Pechorin's philosophy and unusual behavior. Pechorin is heir to Eugene Onegin, the hero of Pushkin's great novel in verse. The name Pechorin, like Onegin, is derived from a river in the north of Russia. Pechorin, like Onegin, is one of Russia's early "superfluous men," but, like his author, Pechorin is more of a rebel without a cause. The innovative structure of the novel inspired several imitations, notably by Vladimir Nabokov in his novel Pnin (1955).

The Dream is one of Lermontov's last poems, featured in his posthumous diary. Nabokov, whose translation follows, thought this "threefold dream" prophetic of the poet's own death.

In noon's heat, in a dale of Dagestan
With lead inside my breast, stirless I lay;
The deep wound still smoked on; my blood
Kept trickling drop by drop away.

On the dale's sand alone I lay. The cliffs
Crowded around in ledges steep,
And the sun scorched their tawny tops
And scorched me—but I slept death's sleep.

And in a dream I saw an evening feast
That in my native land with bright lights shone;
Among young women crowned with flowers,
A merry talk concerning me went on.

But in the merry talk not joining,
One of them sat there lost in thought,
And in a melancholy dream
Her young soul was immersed—God knows by what.

And of a dale in Dagestan she dreamt;
In that dale lay the corpse of one she knew;
Within his breast a smoking wound shewed black,
And blood coursed in a stream that colder grew.

For less, for but one hour amid
The jagged rocks where play I did,
A child, if 'twere but offered me,
Both Heaven and eternity!