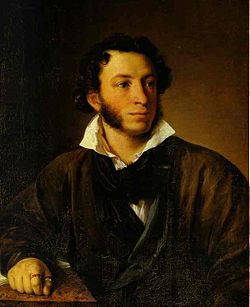 Before the seventeenth century, Russian literature consisted mainly of religious hagiographies and chronicles written in the language of the Russian Orthodox Church, Old Church Slavonic. For some poets and dramatists writing prior to Pushkin—notably the Russian scientist Mikhail Vasilyevich Lomonosov (1711-1765) and Gavriil Derzhavin (1743-1816)—there was no commonly accepted literary language. By synthesizing European literary traditions with Russian folklore, Pushkin created not only the basis for the modern Russian vernacular, but also a style of storytelling—mixing drama, romance, and [[satire]. This style greatly influenced later Russian writers and has been associated with Russian literature ever since.

Pushkin occupies a singular status among both Russian common people and intelligentsia. During Pushkin's time and the later Soviet period, poetry was one of the only means of free expression, and Pushkin remained the preeminent writer for the Soviet establishment and dissidents alike.

It is said Pushkin lived an undisciplined, dissolute life, carrying on affairs with several married women. Obtaining an undistinguished post at court, Pushkin in turn heard scandalous rumors of his young wife's infidelities and lost his life in a duel over his wife's honor. Of first rank among Russia's poets, the scope of his influence is comparable to other pivotal national literary figures, such as William Shakespeare and Johann Wolfgang von Goethe.

Aleksandr Pushkin was proud of his noble lineage. His father descended from one of the Russian gentry's oldest families, tracing their history back to the thirteenth century. His mother's grandfather was Ibrahim Petrovich Gannibal, an Abyssinian who was abducted as a child and ended up in Russia. Gannibal served Peter the Great as a military leader, rising to the rank of general. Eventually Peter conferred nobility upon Gannibal and gave him a small estate. Later Pushkin undertook to write a novel based on the life of his grandfather, The Negro of Peter the Great, but he never finished that work.

Born in Moscow, Pushkin published his first poem at the age of fifteen. By the time he finished as part of the first graduating class of the prestigious Imperial Lyceum in Tsarskoe Selo near St. Petersburg, the Russian literary scene recognized his talent widely. After finishing school, Pushkin installed himself in the vibrant and raucous intellectual youth culture of the capital, St. Petersburg. In 1820, he gained public recognition with the publication of his first long poem, Ruslan and Lyudmila, despite much controversy about its subject and style. 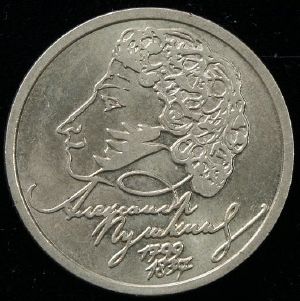 The 1820s were an era of social unrest that culminated in the Decembrist Uprising in 1825, the first "bourgeois" revolution against the Russian autocracy, over the succession of Tsar Alexander I. Pushkin wrote some subversive poems that angered the government, leading to his transfer from the capital. He went first to Kishinev in 1820, where he stayed until 1823. After a summer trip to the Caucasus and to Crimea, he wrote two Romantic poems in the mold of Lord Byron which brought him wide acclaim, The Captive of the Caucasus and The Fountain of Bakhchisaray.

In 1823, Pushkin moved to Odessa, where he again clashed with the government. Since his student years Pushkin had led a reckless and dissolute life, and had carried on affairs with a number of married women. His affair with the wife of the governor general of Odessa was discovered and led to his exile at his mother's rural estate in north Russia from 1824 to 1826. While he was at his mother's estate, the Decembrist Uprising occurred. In 1826, Tsar Nicholas I summoned him to Moscow and pardoned him, even though he confided to the tsar that had he been in St. Petersburg in 1825 he would likely have supported the Decembrist cause. Indeed, some of the insurgents in the Decembrist Uprising had kept copies of his early political poems amongst their papers, and soon Pushkin found himself under the strict control of government censors and unable to travel or publish at will. He had written what became his most famous play, Boris Godunov, while at his mother's estate but could not gain permission to publish it until five years later. 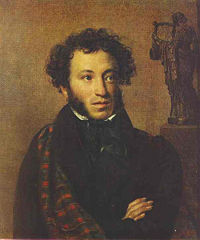 In 1831, at the height of Pushkin's talent and influence, he met Russia's other great early literary giant, Nikolai Gogol. The two became good friends. After reading Gogol's 1831-1832 volume of short stories, Evenings on a Farm near the Dikanka River, Pushkin would support him critically as well. In 1836, Pushkin began a literary magazine, The Contemporary, which featured some of Gogol's most famous short stories. Gogol's comedic stories greatly influenced Pushkin's prose.

Pushkin and his wife Natalya Goncharova, whom he married in 1831, became regulars of court society. The tsar gave Pushkin the rank of Junior Chamberlain, the lowest court title. He felt that the title was conferred upon him so that his wife, who had many admirers—including the Tsar himself—could properly attend court balls. Pushkin was humiliated. In 1837, falling into greater and greater debt amidst rumors that his wife was conducting a scandalous affair, Pushkin challenged her alleged lover, Baron Georges d'Anthès, to a duel. Both men were injured, Pushkin mortally. He died two days later.

The government feared a political demonstration at his funeral, which it moved to a smaller location and made open only to close relatives and friends. His body was spirited away secretly at midnight and buried on his mother's estate.

Pushkin was a master of many styles of poetry. Critics consider many of his works masterpieces, such as the epic poem The Bronze Horseman and the drama The Stone Guest, a tale of the fall of Don Juan. Pushkin himself preferred his novel in verse Eugene Onegin, which he wrote over the course of his life. Although the definitive text leaves out several strophes and more than one variant of the text exists, it is a singular achievement in world literature. The text consists of eight chapters composed in fourteen-line stanzas. There is a regular rhyme scheme, later dubbed the Onegin strophe. It is generally credited with starting a tradition of great Russian novels. While the form is very structured, the thematic material is not. Onegin is a typical Romantic Petersburg dandy in the Byron mode, bored and tired of life. His friend, Lensky is a poet. Lensky’s girlfriend has a sister named Tatyana who is young and inexperienced. She develops a crush on Onegin, and writes him an ardent love letter. His rebuff only strengthens her ardor. To put her off he flirts with Tatyana's sister, Lensky's girlfriend. To save his honor, Lensky challenges his friend to a duel and is killed. Tatyana marries a general, where the narrative breaks, resuming a number of years later. Onegin sees Tatyana again at a Petersburg ball. She has blossomed into a sophisticated woman. Naturally, it is now Onegin's turn to be smitten with her and to write her a letter expressing his admiration. It is Tatyana's turn to reject him. Although she clearly still holds a torch for him, she is not willing to throw away her life and happiness to appease a schoolgirl crush. The structure of the novel is quite simple, the second half mirroring the first. The real hero of the novel is not its plot or characters, but Pushkin's language and narrative style. It has elements of the novel of manners, bildungsroman and roman à clef, to name but a few. Parts of it are autobiographical and lays bare some of the vulgar aspects of the Russian aristocracy.

Although primarily revered as a poet, Pushkin's prose is now seen as significant in the development of Russian literature. It had no great audience in his lifetime, but appreciation for it has grown. The Tales of the Late Ivan Petrovich Belkin consists of five short stories. Its narrative style is rich in parody. "The Shot" tells the story of a would-be Byronic hero, Silvio, who fights a duel. After his adversary misses, Silvio passes on his own shot, only to return and claim his right years later. He grants the adversary another shot. When he misses again, he humiliates him a second time by passing on his shot again. The Tales is somewhat uneven, but his story "The Queen of Spades," published in 1834, was a great success and brilliant gothic tale. Its hero, Hermann, is obsessed by his friend Tomsky's grandmother, an old countess who is supposed to have the secret of three winning cards from Count Saint Germain. Hermann gains access to the old woman through her companion, Liza. He hides in her room and threatens her with a pistol. She dies of fright, but then appears to him in a vision, giving him the secret. He stakes his entire fortune on the three cards, the trey, seven, and ace. They all win, but before he can collect his winnings he discovers to his horror that the card in his hand is not the ace, but the queen of spades, in whose face he sees the old countess. Hermann goes mad, repeating the cards to himself, "trey, seven, ace—trey, seven, queen."

Pushkin founded a literary tradition for Russians, whose native language had previously been thought unsuitable as a literary vehicle. Pushkin was a close observer of the Russian character, a poet whose insights and sympathies toward the common people deeply influenced later writers, such as Nikolai Gogol, Fyodor Dostoevsky, and Leo Tolstoy. His lyric poetry was considered untranslatable and admired above all other poetry in his homeland, yet perhaps for this reason Pushkin never achieved a comparable international reputation.

Perhaps because of his political influence on generations of Russian rebels, Pushkin remained one of only a few Russian pre-Revolution writers who escaped condemnation by the Bolsheviks during their attacks on bourgeois literature and culture: indeed, they renamed Tsarskoe Selo after him.

Pushkin's works also provided fertile ground for Russian composers. Tchaikovsky's operas Eugene Onegin (1879) and The Queen of Spades (1890) became perhaps better known outside of Russia than Pushkin's own works of the same name, while Mussorgsky's monumental Boris Godunov (two versions, 1868-1869 and 1871-1872) ranks as one of the very finest and most original of Russian operas.

A monument to Pushkin in Moscow was dedicated in 1880, with speeches by Turgenev and Dostoevsky. Dostoevsky's speech was a rousing tribute to Pushkin and to Russia that brought him as much admiration among his peers as anything he ever wrote. 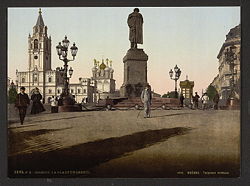 The famous Pushkin Monument in Moscow, opened in 1880 by Turgenev and Dostoyevsky.