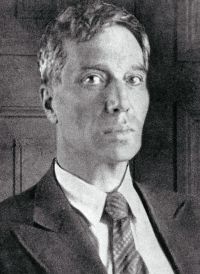 Boris Leonidovich Pasternak (Борис Леонидович Пастернак) (February 10, 1890 – May 30, 1960) was a Russian poet and writer best known in the West for his monumental tragic novel on Soviet Russia, Doctor Zhivago (1957). It is as a poet, however, that he is most celebrated in Russia. My Sister Life, written by Pasternak in 1917, is arguably the most influential collection of poetry published in Russian in the twentieth century. His poetry was somewhat personalized, not fitting neatly into any one school or approach, although for a period of time he did belong to the Centrifuge group, and published some futurist verse. Like most Soviet-era writers who did not fit neatly into the ethic of socialist realism, Pasternak had some difficulties with the authorities. The novel, Doctor Zhivago, which brought him fame in the West, had to be published abroad and caused him much trouble at home, especially after he was awarded the Nobel Prize for Literature in 1958.

Pasternak was born in Moscow on February 10, 1890. His parents were Leonid Pasternak, a prominent Jewish painter and professor at the Moscow School of Painting, who converted to Orthodox Christianity, and Rosa Kaufman, a popular concert pianist. Pasternak was brought up in a cosmopolitan atmosphere. His father's home was visited by Sergei Rachmaninoff, Rainer Maria Rilke, and Leo Tolstoy. His father's conversion would naturally impact his development; many of his later poems have overtly Christian themes.

Inspired by his neighbor Alexander Scriabin, Pasternak resolved to become a composer and entered the Moscow Conservatory. In 1910, he abruptly left the conservatory for the University of Marburg, where he studied under Neo-Kantian philosophers Hermann Cohen and Nicolai Hartmann. Although invited to become a scholar, he decided against philosophy as a profession and returned to Moscow in 1914. His first collection of poetry, influenced by Alexander Blok and the Futurists was published later that year.

During World War I he taught and worked at a chemical factory in the Urals; providing him background material for Dr. Zhivago. Unlike his relatives and many of his friends, Pasternak did not leave Russia after the revolution. He lived most of his life in Moscow. He was fascinated with the new ideas and possibilities the revolution had brought to life.

Pasternak spent the summer of 1917 living in the steppe near Saratov, where he fell in love with a Jewish girl. This affection resulted in the collection My Sister Life, which he wrote in three months, but was too embarrassed to publish for four years. When it finally appeared in 1921, the book had a revolutionary impact upon Russian poetry. It made Pasternak the model of imitation for younger poets and decisively changed the poetic manners of Osip Mandelshtam and Marina Tsvetayeva, to name but a few.

Following My Sister Life, Pasternak produced some hermetic pieces of uneven quality, including his masterpiece, a lyric cycle entitled Rupture (1921). Such varied writers as Vladimir Mayakovsky, Andrey Bely, and Vladimir Nabokov applauded Pasternak's poems as the works of pure, unbridled inspiration. In the later 1920s, he also participated in the celebrated tripartite correspondence with Rilke and Tsvetayeva.

By the end of the 1920s, Pasternak increasingly felt that his colorful modernist style was at variance with the doctrine of Socialist Realism approved by the Communist party. He attempted to make his poetry much more comprehensible to mass readership by reworking his earlier pieces and starting two lengthy poems on the Russian Revolution. He also turned to prose and wrote several autobiographical stories, notably "The Childhood of Luvers" and "Safe Conduct".

By 1932, Pasternak strikingly reshaped his style to make it acceptable to the Soviet public and printed a new collection of poems, aptly entitled The Second Birth. Although its Caucasian pieces were as brilliant as the earlier efforts, the book alienated the core of Pasternak's refined audience abroad. He simplified his style even further for the next collection of patriotic verse, Early Trains (1943), which prompted Nabokov to describe Pasternak as a "weeping Bolshevik" and "Emily Dickinson in trousers".

During the great purges of the later 1930s, Pasternak became progressively disillusioned with Communist ideals. Reluctant to publish his own poetry, he turned to translating Shakespeare (Hamlet, Macbeth, King Lear), Goethe (Faust), Rilke (Requiem fur eine Freundin), Paul Verlaine, and Georgian poets favored by Stalin. Pasternak's translations of Shakespeare have proved popular with the Russian public on account of their colloquial, modernized dialogues, but the critics accused him of "Pasternakizing" the English poet. Although he was widely panned for excessive subjectivism, rumor has it that Stalin crossed Pasternak's name off an arrest list during the purges, quoted as saying "Don't touch this cloud dweller."

Several years before World War II, Pasternak and his wife settled in Peredelkino, a village for writers several miles from Moscow. He was filled with a love of life that gave his poetry a hopeful tone. Pasternak’s love of life is reflected in the name of his alter ego, Zhivago, which is derived from the Russian word for "living" or "alive." Lara, the novel's heroine, is said to have been modeled on his mistress Olga Ivinskaya.

Doctor Zhivago is reminiscent of the kind of big, sweeping novel produced frequently in nineteenth-century Russian literature. It follows the life of Yuri Zhivago until his death in 1929. The backdrop of the action is the revolution and aftermath, especially the Civil War. The plot is a series of random events but there are many strange coincidences that play a significant role in the action, such as Zhivago's chance meeting with Pasha Antipov, who later becomes the Bolshevik military leader, Strel'nikov, with whom he has another chance encounter later on. This character, like many in the novel, represents an aspect of the revolution. Lara is often perceived as Pasternak's contribution of another in a long line of idealized Russian women, stretching back to Pushkin and Lermontov. However, she can also be seen as the symbol of Russia herself. Although the lead character in the novel is Zhivago, it is Lara who is at the center of a struggle between three men, Komarovsky, Antipov, and Zhivago. Komarovsky represents the opportunist, equally at home in the corruption of the old regime and the new. He despoils and abandons her. Antipov is the young idealist who becomes her husband, but whose beliefs lead him into becoming the ruthless Strel'nikov. Finally, there is the sensitive dreamer and poet, Zhivago, who loves her and whom she loves, but who is ultimately unable to take care of her.

Pasternak worked on the novel for almost 20 years, finally finishing it in 1955. It was submitted to and almost accepted for publication by the leading literary publication, Novy Mir. As he could not find a publisher for his novel inside the country, Doctor Zhivago was smuggled abroad and printed in Italy in 1957. This led to a wide-scale campaign of persecution within the Soviet Union until his death. Although none of his critics had the chance to read the proscribed novel, some of them publicly demanded that the authorities, "kick the pig out of our kitchen-garden," i.e., expel Pasternak from the USSR.

Pasternak was awarded the Nobel Prize for Literature in 1958, but he declined to accept it, unable to travel to the West to receive his award. Pasternak died on May 30, 1960, and was buried in Peredelkino in the presence of several devoted admirers, including the poet Andrey Voznesensky. Doctor Zhivago was eventually published in the USSR in 1987.

Pasternak's post-Zhivago poetry probes the universal questions of love, immortality, and reconciliation with God. The poems from his last collection, which he wrote just prior to his death, are probably his best-known and best-loved in Russia.