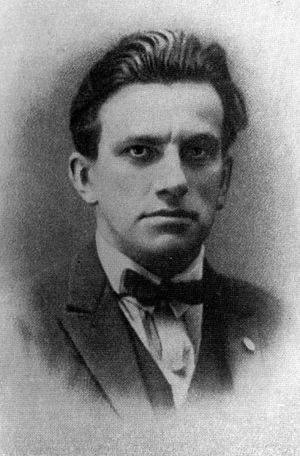 Vladimir Vladimirovich Mayakovsky (Влади́мир Влади́мирович Маяко́вский) (July 19, 1893 – April 14, 1930) was among the foremost representatives for the poetic futurism of early twentieth-century Tsarist Russia and the Soviet Union. Mayakovsky was considered the leading poet of the Russian Revolution. He and his colleagues in the revolutionary and avant-garde artist movements promoted a "democratization of art." Like many artists seeking to make art more utilitarian, he willingly allowed himself to be used by the propaganda needs of the new regime. Unlike many artists who embraced the new regime early on only to become quickly disillusioned, Mayakovsky remained loyal to the Soviet regime until almost the end of his life. His attempts to create a new world ultimately ended in suicide, as the revolutionary art gave way to Stalinist retrenchment and socialist realism.

He was born the third child and only son to his family in Bagdadi, Georgia where his father worked as a forest ranger. Both parents were descendants of Cossacks. At the age of 14, Mayakovsky took part in socialist demonstrations at the town of Kutaisi, where he attended the local grammar school. After the sudden and premature death of his father in 1906, the family—Mayakovsky, his mother, and his two sisters—moved to Moscow, where he attended School No. 5.

In Moscow, Mayakovsky developed a passion for Marxist literature and took part in numerous activities of the Russian Social Democratic Labor Party. In 1908, he was dismissed from the grammar school due to his mother's inability to afford tuition.

Around that time, Mayakovsky was imprisoned on three occasions for subversive political activities, but avoided deportation because he was underage. During a period of solitary confinement in Butyrka Prison in 1909, he began writing poetry, but his poems were confiscated. On his release from prison, he continued working within the socialist movement, and in 1911 he joined the Moscow Art School, where he became acquainted with members of Russia's futurist movement. He became a leading spokesman for the group Gileas (Гилея), and a close friend to David Burlyuk, an older student whom he saw as his mentor.

The 1912 futurist publication, A Slap in the Face of Public Taste (Пощёчина общественному вкусу) printed Mayakovsky's first published poems: "Night" (Ночь), and "Morning" (Утро). Because of their political activities, Burlyuk and Mayakovsky were expelled from the Moscow Art School in 1914.

His work continued in the futurist vein until 1914. His artistic development then shifted increasingly in the more narrative-based direction of epic poetry. It is primarily this work, published during the period immediately preceding the Russian Revolution, which was to establish his reputation as a poet in Russia and abroad.

A Cloud in Trousers (1915) was Mayakovsky's first major poem of appreciable length and it depicted the heated subjects of love, revolution, religion, and art, written from the vantage point of a spurned lover. The language of the work was the language of the streets, and Mayakovsky went to considerable lengths to deconstruct the idealistic and romanticized notions of poetry and poets.

(From the prologue of A Cloud in Trousers. source: [1]) In the summer of 1915, Mayakovsky fell in love with a married woman, Lilya Brik. It was to her that the poem "The Backbone Flute" (1916) was dedicated. Unfortunately for Mayakovsky, she was the wife of his publisher, the futurist poet and critic, Osip Brik. The love affair, as well as his impressions of war and revolution, strongly influenced his works of these years. 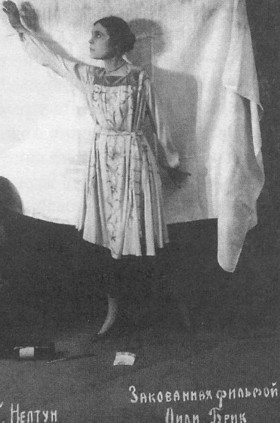 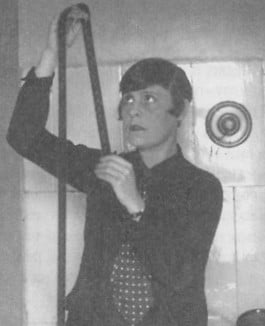 Despite the calamities of World War I, Russian Civil War, and the tumultuous 1920s, their love affair remained in the public's attention, possibly because she did not divorce her husband. After June 1915, Mayakovsky's lyrical poetry was almost exclusively devoted to Lilya. He frequently explicitly dedicated his poems to her or referred to Lilya by name, as in his “A Cloud in Trousers” ("Облако в штанах," 1915), “The Backbone Flute” ("Флейта-позвоночник," 1916), “About This” ("Про это," 1922), and “Lilechka! Instead of a Letter” ("Лилечка! Вместо письма"). In 1918, Mayakovsky wrote the scenario for the movie “Chained by the Film” ("Закованная фильмой") in which he and Lilya both starred. The movie (produced by a private movie company "Neptune") has been lost, with the exception of a few trial shots. Gianni Totti used them in his 1980s movie.

His major works of the period included "War and the World" (1916), a poem addressing the horrors of World War I and "Man" (1917), a poem dealing with the anguish of love. Neither could be published until after the revolution because of their anti-religious content.

Mayakovsky was rejected as a volunteer at the beginning of WWI, and during 1915—1917 worked at the Petrograd Military Automobile School as a draftsman. At the onset of the revolution, Mayakovsky was in Smolny, Petrograd, from where he witnessed the October Revolution. He started reciting poems such as "Left March! For the Red Marines: 1918" (Левый марш (Матросам), 1918) at naval theatres, with sailors as the audience. 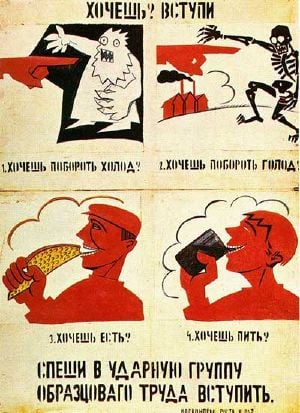 After moving back to Moscow, Mayakovsky worked for the Russian State Telegraph Agency (ROSTA) creating—both graphic and text—satirical Agitprop posters. In 1919, he published his first collection of poems Collected Works 1909—1919 (Все сочиненное Владимиром Маяковским). In the cultural climate of the young Soviet Union, his popularity grew rapidly. During 1922–1928, Mayakovsky was a prominent member of the Left Art Front, defining his work as “Communist futurism” (комфут).

One of the few writers allowed to travel freely, his voyages to Latvia, Britain, Germany, the United States, Mexico, and Cuba influenced works like My Discovery of America (Мое открытие Америки, 1925). He also traveled extensively throughout the Soviet Union.

On a lecture tour in the United States, Mayakovsky met Elli Jones, who later gave birth to his daughter, an event which Mayakovsky only came to know in 1929, when the couple met clandestinely in the south of France. In the late 1920s, Mayakovsky fell in love with Tatiana Yakovleva and to her he dedicated the poem "A Letter to Tatiana Yakovleva" (Письмо Татьяне Яковлевой, 1928).

Over the years, he was considered the Soviet poet par excellence. It is certainly true that he lent his enormous talents to further the propaganda needs of the Soviet regime. Epic poems, such as "Vladimir Ilyich Lenin" (1924) and "Good! A Poem of the October Revolution" (1927) aggrandize the accomplishments of the revolution. He began his career as a revolutionary in both art and politics in pre-revolutionary Russia and remained an apologist for the revolution until almost the end of his life, despite criticism by contemporaries and also by close friends like Boris Pasternak.

His influence extended beyond the borders of the Soviet Union. He also changed the perceptions of poetry in wider twentieth-century culture. While he was associated with the futurists, he quickly developed his own unique style. Mayakovsky was an interesting combination, an iconoclast who nonetheless knew the canon quite well. Mayakovsky loved to break conventions in life and in poetry. He used free verse, unlike most Russian poetry, and created unusual rhymes and jarring images. His work was often upsetting, over the top, yet brilliant at the same time.

Near the end of the 1920s, Mayakovsky became increasingly disillusioned with bolshevism and propaganda; his satirical play The Bedbug (клоп, 1929), dealt with his frustrations with Soviet philistinism and bureaucracy. During his last month, Mayakovsky struggled with illness and personal disappointment in addition to his mounting frustrations with the regime. On the evening of April 14, 1930, Mayakovsky shot himself. An unfinished poem in his suicide note read, in part:

The love boat has crashed against the daily routine. You and I, we are quits, and there is no point in listing mutual pains, sorrows, and hurts.

Mayakovsky was interred at the Moscow Novodevichy Cemetery. In 1930, his birthplace of Bagdadi in Georgia was renamed Mayakovsky in his honor. Following Stalin's death, rumors arose that Mayakovsky did not commit suicide but was murdered at the behest of Stalin. During the 1990s, when many KGB files were declassified, there was hope that new evidence will come to light on this question, but none has been found and the hypothesis remains unproven.

After his death, Mayakovsky was attacked in the Soviet press as a "formalist" and a "fellow-traveller." In 1935, Stalin wrote a remark on Lilya Brik's letter to him:

"Comrade Yezhov, [head of the NKVD, Stalin's secret police] please take charge of Brik's letter. Mayakovsky is still the best and the most talented poet of our Soviet epoch. Indifference to his cultural heritage is a crime. Brik's complaints are, in my opinion, justified..." (Source: Memoirs by Vasily Katanyan (Lilya Brik's stepson) p.112)

This officially canonized Mayakovsky and assured his place within Stalinist Russia for the next twenty years, but, as Boris Pasternak noted [2], it "dealt him the second death" in some circles.