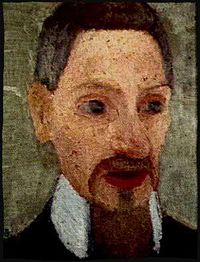 Rainer Maria Rilke in a portrait by Paula Modersohn-Becker

Rainer Maria Rilke (December 4, 1875 – December 29, 1926) is generally considered the German language's greatest twentieth century poet. His haunting images tend to focus on the problems of Christianity in an age of disbelief, solitude, and profound anxiety, themes that sometimes place him in the school of modernist poets, though Rilke himself does not fit easily in any modernist school. Rilke's position in poetry is completely unique, and he shares very little in terms of style with the German Romantic poets who preceeded him. Influenced by the impressionist techniques of artists August Rodin and Paul Cezanne, Rilke is unlike any other modern writer working in German, or, for that matter, in French, English or any other European language.

Rilke attempted in his poetry to create language that, in his own words, was entirely new and unrelated to any poetry written before him. Rilke's intention was perhaps drawing unconsciously on the same dissatisfaction with contemporary writing that fueled his contemporary, Martin Heidegger's insistence that one must "get behind" the thinkers of the past, and achieve a state of innocent wonder at the world like that of a child. Rilke's verses, like Wordsworth's celebrate the beauty of child-like innocence and the wonders of nature, but unlike Wordsworth or any poet in the literature, Rilke attempted to invoke this sense of wonder using language entirely his own, creating a style that is surreal, striking, and, at times, fantastic.

Rilke's influence to poetry not only in Germany but also throughout Europe is immense. In addition to being a major German poet, Rilke was also fluent in French, and composed nearly 400 poems in that language. English translation has been somewhat slow to catch up with him (no doubt because of the strange newness of his language) but in recent years it has become more and more clear that Rilke is, along with Celan, Pasternak, Yeats, and Pound one of the most important and cosmopolitan poets of the European world.

He was born René Karl Wilhelm Johann Josef Maria Rilke in Prague. His childhood and youth in Prague were not very happy. His father, Josef Rilke (1838-1906), became a railway official after an unsuccessful military career. His mother, Sophie ("Phia") Entz (1851-1931), came from a well-to-do Prague manufacturing family, the Entz-Kinzelbergers, who lived in a palace on the Herrengasse 8, where Rene also spent much of his early years. The parents' marriage fell apart in 1884. Phia’s prolonged mourning of her elder daughter encumbered the relationship between her and her only son. She forced René into his sister's role, including dressing him in girl's clothing when he was young.

His parents pressured the poetically and artistically gifted youth into entering a military academy, which he attended from 1886 until 1891, when he left due to illness. He would later recount to friends that his time spent in the military academy were some of the most miserable years of his life, and that they nearly crushed his poetic spirit. From 1892 to 1895 he was tutored for the university entrance exam, which he passed in 1895. In 1895 and 1896, he studied literature, art history, and philosophy in Prague and Munich.

In 1897 in Munich, Rainer Maria Rilke met and fell in love with the widely traveled intellectual and lady of letters Lou Andreas-Salome (1861-1937); Rilke changed his first name from René to Rainer at Andreas-Salome's urging. His intensive relationship with this married woman, with whom he undertook two extensive trips to Russia, lasted until 1900. But even after their separation, Lou continued to be Rilke's most important confidant until the end of his life. From 1912 to 1913 Andreas-Salome trained as a psychoanalyst with Sigmund Freud; she would share her knowledge of psychoanalysis with Rilke.

In 1898 Rilke undertook a journey to Italy that lasted several weeks. In 1899 he traveled to Moscow, where he met the novelist Leo Tolstoy. Between May and August 1900, a second journey to Russia, accompanied only by Lou, again took him to Moscow and St. Petersburg.

In autumn 1900, Rilke stayed in Worpswede, where he got to know the sculptress Clara Westhoff (1878-1954), whom he married the following spring. The couple soon had a daughter named Ruth (1901-1972). Rilke, however, was not one for a middle-class family life; in the summer of 1902, Rilke left home and traveled to Paris to write a monograph on the sculptor Auguste Rodin (1840-1917). Still, the relationship between Rilke and Westhoff continued for the rest of his life.

At first, Rilke had a difficult time in Paris—an experience that he called on in the first part of his only novel, The Notebooks of Malte Laurids Brigge. At the same time, his encounter with modernism was very stimulating: Rilke became deeply involved in the sculpture of Rodin, and then with the work of Paul Cezanne. Rodin taught him the value of objective observation, which led to Rilke's Dinggedichten ("thing-poems"), a famous example of this is Der Panther ("The Panther"):

His gaze, from the constantly passing bars,
Has grown so weary that it can hold no more.
To him it is as if there are a thousand bars,
And beyond those thousand bars, no world.

The gentle slink of his powerful, supple stride,
Turning in on itself in ever-smaller circles,
Is as a ritual dance of strength around a center
In which a great will stands paralyzed.

Occasionally the curtain of his pupils
Will silently rise, admitting an image.
Passing through the tense stillness of his limbs,
It plunges into his heart and is no more.

During the period this poem was written, Paris increasingly became Rilke's home. The most important works of the Paris period were Neue Gedichte (New Poems) (1907), Der Neuen Gedichte Anderer Teil (Another Part of the New Poems) (1908), the two "Requiem" poems (1909), and the novel The Notebooks of Malte Laurids Brigge, which he started in 1904 and completed in January 1910.

Between October 1911 and May 1912, Rilke stayed at the Castle Duino, near Trieste, home of Countess Marie of Thurn and Taxis. There, in 1912, he began the poem cycle called the Duino Elegies, which would remain unfinished for a decade due to a long-lasting creative crisis.

The outbreak of World War I surprised Rilke during a stay in Germany. He was unable to return to Paris, where his property was confiscated and auctioned. He spent the greater part of the war in Munich. From 1914 to 1916 he had a turbulent affair with the painter Lou Albert-Lasard.

Rilke was called up at the beginning of 1916, undertaking basic training in Vienna. Influential friends interceded on his behalf; consequently he was transferred to the War Records Office and discharged from the military on June 9, 1916. He spent the subsequent time once again in Munich, interrupted by a stay on Hertha Koenig's Gut Bockel in Westphalia. The traumatic experience of military service, a reminder of the horrors of the military academy, almost completely silenced him as a poet.

Switzerland and the Duino elegies

On June 11, 1919, Rilke traveled from Munich to Switzerland. The ostensible reason was an invitation to lecture in Zurich, but his real motive was the wish to escape the post-war chaos and take up once again his work on the Duino Elegies. The search for a suitable and affordable place to live proved to be very difficult. Among other places, Rilke lived in Soglio, Locarno, and Berg am Irchel. Only in the summer of 1921 was he able to find a permanent residence in the Chateau de Muzot, close to Sierre in Valais. In May 1922, Rilke's patron Werner Reinhart purchased the building so that Rilke could live there rent-free.

In an intense creative period, Rilke completed the Duino Elegies within several weeks in February 1922. Before and after, he wrote both parts of the poem cycle The Sonnets to Orpheus. Both are among the high points of Rilke's work.

From 1923 on Rilke increasingly had to struggle with health problems that necessitated many long stays at a sanatorium in Territet, near Montreux, on Lake Geneva. His long stay in Paris between January and August 1925 was an attempt to escape his illness through a change in venue and living conditions. Despite this, numerous important individual poems appeared in the years 1923-1926 (including "Gong" and "Mausoleum"), as well as a comprehensive lyrical work in French.

Only shortly before his death was Rilke's illness diagnosed as leukemia. The poet died on December 29, 1926 in the Valmont Sanatorium in Switzerland, and was laid to rest on January 2, 1927 in the Raron cemetery to the west of Visp. He chose his own epitaph:

Rose, oh pure contradiction, joy
of being No-one's sleep, under so
many lids.