Alexander Nikolayevich Scriabin (Russian: Александр Николаевич Скрябин; sometimes transliterated as Skryabin) (January 6, 1872 – April 27, 1915) was a Russian composer and pianist. Scriabin began composing in the style of the lush romanticism of Frédéric Chopin which favored a tonal center. However, he later evolved to a new and sometimes strident use of the 12 tones without any fixed center. He used the art of modulations and all the tones of the chromatic scale towards an absence of a tonal center or atonality. This music which turned away from the traditional consonance, disonance, and tonal resolution was Scriabin's way of embracing an equality in all things wherein each entity had an independence which was initiated and concluded in true freedom without a reminder from the past.

Scriabin was born into an aristocratic family in Moscow on Christmas Day 1871 according to the Julian Calendar. When he was only one year old, his mother, a concert pianist, died of tuberculosis. Scriabin's father left for Turkey, leaving the infant with his grandmother and great aunt. From an early age he studied the piano, taking lessons with Nikolay Zverev, a strict disciplinarian, who was teaching Sergei Rachmaninoff and a number of other prodigies at the same time.

Scriabin later studied at the Moscow Conservatory with Anton Arensky, Sergei Taneyev, and Vasily Ilyich Safonov. He became a noted pianist despite his small hands with a span of barely over an octave. Feeling challenged by Rachmaninov, who had exceptionally large hands, he seriously damaged his right hand while practicing a piece by Liszt. His doctor said he would never recover; he wrote his first large-scale opus, the F minor sonata, as a "cry against God, against fate." Unmoved by the requirement to write several pieces in forms that did not interest him, Scriabin failed his composition class and did not graduate. Ironically, the one requirement he did complete, an E minor fugue, afterward became required learning for decades at the Conservatory.

Scriabin married a pianist, Vera Ivanova Isakovich, after graduation and had several children, but he eventually abandoned his wife and teaching position for an attraction to a young pupil, Tatiana Fyodorovna Schloeze, with whom he had a son named Julian. That son was also a prodigy who painted, wrote poetry, and composed several sophisticated pieces before drowning in a boating accident at age 11.

Scriabin, previously interested in Friedrich Nietzsche's übermensch theory, also became interested in theosophy, and both would influence his music and musical thought. In 1909-1910 he lived in Brussels, becoming interested in Delville's Theosophist movement and continuing his reading of Hélène Blavatsky (Samson 1977). Theosophist and composer Dane Rudhyar wrote that Scriabin was "the one great pioneer of the new music of a reborn Western civilization, the father of the future musician," (Rudhyar 1926b, 899) and an antidote to "the Latin reactionaries and their apostle, Igor Stravinsky" and the "rule-ordained" music of "Arnold Schoenberg's group." (Ibid., 900-901).

Scriabin was a hypochondriac his entire life. He died in Moscow from septicemia, contracted as a result of a shaving cut or a boil on his lip. For some time before his death he had planned a multi-media work to be performed in the Himalaya Mountains, that would bring about the armageddon, "a grandiose religious synthesis of all arts which would herald the birth of a new world" [1] This piece, titled Mysterium, was never realized. Scriabin wrote poetry also, which was generally tied to his compositions, and it is not taken seriously by itself.

He was possibly the uncle of Vyacheslav Molotov, the Russian politician and eponym of the Molotov cocktail. Molotov's original surname was Scriabin. However, Simon Montefiore in his biography of Josef Stalin, states that despite the shared family name, Molotov was not in any way related to the composer.

Pianists who have performed Scriabin to critical acclaim include Vladimir Sofronitsky, Vladimir Horowitz and Sviatoslav Richter. Horowitz performed for Scriabin, in his home as a youth, and Scriabin had an enthusiastic reaction, but cautioned that he needed further training. Horowitz, as an elderly man, remarked that Scriabin was obviously crazy, because he had tics and couldn't sit still. Despite Horowitz' assessment, Scriabin held the rapt attention of the musical world in Russia while he was alive.

Many of Scriabin's works are written for the piano. The earliest pieces resemble Frédéric Chopin and include music in many forms that Chopin himself employed, such as the etude, the prelude and the mazurka. Scriabin's music gradually evolved during the course of his life, although the evolution was very rapid and especially long when compared to most composers. Aside from his earliest pieces, his works are strikingly original, the mid- and late-period pieces employing very unusual harmonies and textures. The development of Scriabin's voice or style can be followed in his ten piano sonatas: the earliest are in a fairly conventional late-Romantic idiom and show the influence of Chopin and Franz Liszt, but the later ones move into new territory; the last five being written with no key signature. Many passages in them can be said to be atonal, though from 1903 through 1908, "tonal unity was almost imperceptibly replaced by harmonic unity." (Samson 1977) See: synthetic chord.

Aaron Copland praised Scriabin's thematic material as "truly individual, truly inspired," but criticized Scriabin for putting "this really new body of feeling into the strait-jacket of the old classical sonata-form, recapitulation and all" calling this "one of the most extraordinary mistakes in all music." According to Samson the sonata-form of Sonata No. 5 has some meaning to the work's tonal structure, but in Sonata No. 6 and Sonata No. 7 formal tensions are created by the absence of harmonic contrast and "between the cumulative momentum of the music, usually achieved by textural rather than harmonic means, and the formal constraints of the tripartite mould." He also argues that the Poem of Ecstasy and Vers la flamme "find a much happier co-operation of 'form' and 'content'" and that later Sonatas such as Sonata No. 9 employ a much more flexible sonata-form. (Samson 1977) 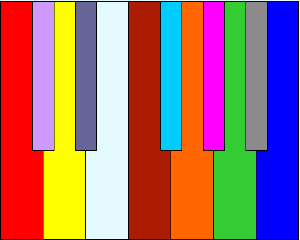 Synesthetic colors, described by the composer

Though these works are often considered to be influenced by Scriabin's synesthesia, a condition wherein one experiences sensation in one sense in response to stimulus in another, it is doubted that Alexander Scriabin actually experienced this [2] [3]. His color system, unlike most synesthetic experience, lines up with the circle of fifths: it was a thought-out system based on Sir Isaac Newton's Optics. Indeed, influenced also by his theosophical beliefs, he developed it towards what would have been a pioneering multimedia performance: his unrealized magnum opus Mysterium was to have been a grand week-long performance including music, scent, dance, and light in the foothills of the Himalayas that was to bring about the dissolution of the world in bliss.

In his autobiographical Recollections, Sergei Rachmaninoff recorded a conversation he had had with Scriabin and Nikolai Rimsky-Korsakov about Scriabin's association of color and music. Rachmaninoff was surprised to find that Rimsky-Korsakov agreed with Scriabin on associations of musical keys with colors; himself skeptical, Rachmaninoff made the obvious objection that the two composers did not always agree on the colors involved. Both maintained that the key of D major was golden-brown; but Scriabin linked E-flat major with red-purple, while Rimsky-Korsakov favored blue. However, Rimsky-Korsakov protested that a passage in Rachmaninoff's opera The Miserly Knight supported their view: the scene in which the Old Baron opens treasure chests to reveal gold and jewels glittering in torchlight is written in D major. Scriabin told Rachmaninoff that "your intuition has unconsciously followed the laws whose very existence you have tried to deny."

While Scriabin wrote only a small number of orchestral works, they are among his most famous, and some are frequently performed. They include three symphonies, a piano concerto (1896), The Poem of Ecstasy (1908) and Prometheus: The Poem of Fire (1910), which includes a part for a "clavier à lumières," also known as the Luxe, - which was a color organ designed specifically for the performance of Scriabin's symphony. It was played like a piano, but projected colored light on a screen in the concert hall rather than sound. Most performances of the piece (including the premiere) have not included this light element, although a performance in New York City in 1915 projected colors onto a screen. It has erroneously been claimed that this performance used the color-organ invented by English painter A. Wallace Rimington when in fact it was a novel construction personally supervised and built in New York specifically for the performance by Preston S. Miller, the president of the Illuminating Engineering Society.

Scriabin's original color keyboard, with its associated turntable of colored lamps, is preserved in his apartment near the Arbat in Moscow, which is now a museum dedicated to his life and works.

A comparison of the creative trajectories of Rachmaninov and Scriabin has fueled psychoanalytic speculation on the distinction between talent and genius(Garcia 2004).