Giorgos Seferis (Γιώργος Σεφέρης) was the pen name of Geōrgios Seferiádēs (March 13, 1900 - September 20, 1971), one of the most important Greek poets of the twentieth century and a Nobel laureate. He was also a career diplomat in the Greek Foreign Service, culminating in his appointment as Ambassador to the UK, a post which he held from 1957 to 1962.

Seferis helped to introduce the poetry of Symbolism to the Greek language. The Symbolist poets wished to liberate techniques of versification in order to allow greater room for "fluidity," and as such were aligned with the movement towards free verse. Symbolist poems sought to evoke, rather than to describe; symbolic imagery was used to signify the state of the poet's soul. 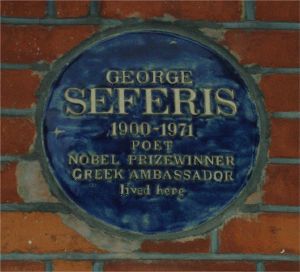 Seferis was born in Urla (Greek: Βουρλά) near Smyrna in Asia Minor, Ottoman Empire (now İzmir, Turkey). His father, Stelios Seferiadis, was a lawyer, and later a professor at the University of Athens, as well as a poet and translator in his own right. He was also a staunch Venizelist and a supporter of the demotic Greek language over the formal, official language (katharevousa). Both of these attitudes influenced his son. In 1914, the family moved to Athens, where Seferis completed his secondary school education. He continued his studies in Paris from 1918 to 1925, studying law at the Sorbonne. While he was there, in September 1922, Smyrna was recaptured by the Turks after a two year Greek occupation and its Greek population, including Seferis' family, fled. Seferis would not visit Smyrna again until 1950; the sense of being an exile from his childhood home would inform much of Seferis' poetry, showing itself particularly in his interest in the story of Odysseus. Seferis was also greatly influenced by Kavafis, T. S. Eliot and Ezra Pound.

He returned to Athens in 1925, and was admitted to the Royal Greek Ministry of Foreign Affairs in the following year. This was the beginning of a long and successful diplomatic career, during which he held posts in England (1931-1934) and Albania (1936-1938 ). He married Maria Zannou ("Maro") on April 10, 1941, on the eve of the German invasion of Greece. During the Second World War, Seferis accompanied the Free Greek Government in exile to Crete, Egypt, South Africa, and Italy, and returned to liberated Athens in 1944. He continued to serve in the Ministry of Foreign Affairs, holding diplomatic posts in Ankara, Turkey (1948-1950) and London (1951-1953). He was appointed minister to Lebanon, Syria, Jordan, and Iraq (1953-1956), and was Royal Greek Ambassador to the United Kingdom from 1957 to 1961, the last post before his retirement in Athens.

Seferis first visited Cyprus in November 1953. He immediately fell in love with the island, partly because of its resemblance—in its landscape, mixture of populations, and in its traditions—to his childhood summer home in Larnaca. His book of poems, Imerologio Katastromatos III, was inspired by the island, and mostly written there–bringing to an end a period of six or seven years in which Seferis had not produced any poetry. Its original title was Cyprus, Where it was Ordained for me… a quotation from Euripides’ Helen, in which Teucer states that Apollo has decreed that Cyprus shall be his home; it made clear the optimistic sense of homecoming Seferis felt on discovering the island. Seferis changed the title in the 1959 edition of his poems.

Politically, Cyprus was entangled in the dispute between the UK, Greece, and Turkey over its international status. Over the next few years, Seferis made use of his position in the diplomatic service to strive towards a resolution of the Cyprus dispute, investing a great deal of personal effort and emotion. This was one of the few areas in his life in which he allowed the personal and the political to mix.

In 1963, Seferis was awarded the Nobel Prize for Literature "for his eminent lyrical writing, inspired by a deep feeling for the Hellenic world of culture." Seferis was the first Greek to receive the prize (followed later by Odysseas Elytis,who became a Nobel laureate in 1979). His nationality, and the role he had played in the twentieth century renaissance of Greek literature and culture, were probably a large contributing factor to the award decision. But in his acceptance speech, Seferis chose to emphasize his own humanist philosophy, concluding: "When on his way to Thebes Oedipus encountered the Sphinx, his answer to its riddle was: 'Man.' That simple word destroyed the monster. We have many monsters to destroy. Let us think of the answer of Oedipus." While Seferis has sometimes been considered a nationalist poet, his "Hellenism" had more to do with identifying a unifying strand of humanism in the continuity of Greek culture and literature.

In 1967, the repressive nationalist, right-wing Regime of the Colonels took power in Greece after a coup d'état. After two years marked by widespread censorship, political detentions and torture, Seferis took a stand against the regime. On March 28, 1969, he made a statement on the BBC World Service, with copies simultaneously distributed to every newspaper in Athens. In authoritative and absolute terms, he stated, "This anomaly must end."

Seferis did not live to see the end of the junta in 1974, the direct result of Turkey’s invasion of Cyprus, which had been prompted by the junta’s attempt to overthrow Cyprus’ Archbishop Makarios.

At his funeral, huge crowds followed his coffin through the streets of Athens, singing Mikis Theodorakis’ setting of Seferis’ poem "Denial" (then banned); he had become a popular hero for his resistance to the regime.

Seferis was among the most honored Greek poets of his generation. He was honored by the Academy of Athens in 1947 and is considered to be the most distinguished Greek poet of 'the generation of the 30s,' which introduced Symbolism to modern Greek literature. His work is permeated by a deep feeling for the human predicament.

In addition to the Nobel Prize for Literature, Seferis received many honors and prizes, among them honorary doctoral degrees from the universities of Cambridge (1960), Oxford (1964), Salonika (1964), and Princeton (1965). There are commemorative blue plaques on two of his London homes—51 Upper Brook Street, and in Sloane Avenue.

In 1999, there was a dispute over the naming of a street in Ízmir Yorgos Seferis Sokagi (a Turkification of Giorgos Seferis), due to continuing ill-feeling around the Greco-Turkish War in the 1920s.


I woke with this marble head in my hands;
It exhausts my elbows and I don't know where to put it down.
It was falling into the dream as I was coming out of the dream
So our life became one and it will be very difficult for it to separate again.


He is buried at First Cemetery of Athens.

Retrieved from https://www.newworldencyclopedia.org/p/index.php?title=Giorgos_Seferis&oldid=1057238
Categories:
Hidden category:
This page was last edited on 29 August 2021, at 20:33.
Content is available under Creative Commons Attribution/Share-Alike License; additional terms may apply. See Terms of Use for details.