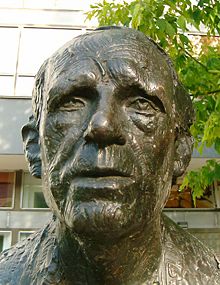 Heinrich Theodor Böll (December 21, 1917 – July 16, 1985) was one of Germany's foremost post-World War II writers. His ironic novels dealt with the aftermath of German militarism during the first half of the twentieth century and the effects of its Nazi past on German society in the second half of the twentieth century. Böll was deeply affected by the Nazi experience, especially the destruction of his home town, Cologne.

Böll's novels are part of modern Germany's attempt to come to terms with its embrace of Nazism, which represented the nadir of twentieth-century racism and the triumph of the irrational in a supposedly enlightened modern civilization. Hitler's hatred of the Jews and his fanatical pursuit of the Final Solution, even as Germany was on the verge of defeat, was a repudiation of the European tradition of rationalism and presented the problem of evil not merely a sociological matter, but as rooted in the dysfunction of the human heart.

Böll was a gentle, peace-loving man but tenacious in his efforts to examine the causes of Germany's horrific national experience. In his time, he was known as a leading advocate for peace. Böll was awarded the Nobel Prize for Literature in 1972.

Böll was born in Cologne, Germany to a liberal, Catholic, pacifistic family. He successfully resisted joining the Hitler Youth during the 1930s and was apprenticed to a bookseller, then studied German at the University of Cologne. Drafted into the German Army, Böll served in France, Romania, Hungary, and the Soviet Union, and was wounded four times before he was captured by Americans in April 1945, and sent to a POW camp. His wounds (he had lost all toes to frost bite) made him a regular in hospitals until the end of his life. At the age of 30, he became a full-time writer.

His first novel, Der Zug war pünktlich (The Train Was on Time), was published in 1949. Many other novels, short stories, radio plays, and essay collections followed, and his best-known works include Billiards at Half-past Nine, The Clown, Group Portrait with Lady, The Lost Honor of Katharina Blum, and The Safety Net. Böll was deeply rooted in his home town of Cologne, with its strong Roman Catholicism and its rather rough and drastic sense of humor. In the immediate post-war period, he was preoccupied with memories of the War and the effect it had—materially and psychologically—on the lives of ordinary people. He made them the heroes of his writing.

His villains are the authority figures in government, business, and the Church, whom he castigates, sometimes humorously, sometimes acidly, for what he perceived as their conformism, lack of courage, self-satisfied attitude, and abuse of power. His simple style made him a favorite for German-language textbooks.

He was deeply affected by the Nazi takeover of Cologne, as they essentially exiled him from his own town. Furthermore, the destruction of Cologne by Allied bombing raids scarred him irrevocably. His works have been dubbed "Trümmerliteratur"—the literature of the rubble. Architecturally, the newly-rebuilt Cologne, prosperous once more, left him indifferent. On this note, Böll seemed to be a pupil of William Morris: He made known that he'd have preferred Cologne cathedral unfinished, with the fourteenth century wooden crane on top of it, as it stood in 1848. Throughout his life he maintained numerous relations to Cologne citizens, rich and poor. When he was in the hospital, the nurses often complained about the "low-life" people who came to see their friend, Heinrich Böll.

He and his wife lived in Cologne and the Eifel mountains. However, he also spent time on Achill Island off the west coast of Ireland. He recorded some of his experiences in Ireland in his book Irish Journal, and his cottage there is now a local museum.

He was at one time president of International P.E.N. He traveled frequently as a representative of the new, democratic Germany. His appearance and attitude were in complete contrast to the boastful, aggressive type of German which had became infamous all over the world during Hitler's reign. Böll was particularly successful in Eastern Europe, as he seemed to portray the dark side of capitalism in his books. He sold millions of copies in the Soviet Union alone. When Alexander Solzhenitsyn was expelled from the Soviet Union, he first took refuge in Heinrich Böll's house.

Heinrich Böll died in 1985, at the age of 67. His memory lives on at, among other places, the Heinrich-Böll-Foundation and a special Heinrich Böll Archive in the Cologne Library.

Billiards at Half Past Nine

Billiards at Half-past Nine was written in 1959 and reflects the Böll's opposition to Nazism as well as his aversion to war. The entirety of the novel takes place on the day of September 6, 1958, but the story stretches back to the turn of the century through the use of flashbacks and recollections of memories by the characters. It follows the Faehmel family in post-Nazi Germany as well as their history during the First World War through the present day of 1958.

The complex plot structure affords the author the opportunity to more fully explore past events and to show the impact that Nazism had not only during the 1930s and 1940s, but on present realities. Saint Anthony's Abbey becomes the focal point for the war and the strife that was not resolved with the end of the Nazi regime, but remains in the lives of the characters and, by implication, the German reading public for whom the book was intended.

Böll's decision to have so many different narrators creates a panorama of post-Nazi society and allows the reader to see characters not only from their own perspective, but through the perception of the others as well. The reader first meets the main character, Robert, through his secretary, and then old Jochen, another principal character; not until the third chapter is the protagonist physically introduced. The reader's connection to characters is constantly being filtered through the perceptions of the different narrators. This creates questions of narrative reliability and a shifting sense of meaning. The subjective retellings style is a reflection on the world the Faehmel family lived in and a commentary on their society.

Böll was an impassioned pacifist and Billiards at Half-past Nine comments on the stupidity of war. The two world wars that the characters live through, and fight through, are never projected in a positive or justifiable light, but as destructive to the country, the society, and all involved.

Robert, the main character, is required to join the army and becomes a demolition expert, destroying buildings, bridges, and everything in the path of the German Army. Under the command of a crazy German general, he carries out the order to destroy Saint Anthony Abbey, which his father had built. He knows it is senseless, and the worthless destruction of the Abbey is symbolic of the uselessness of the war and of war in general.

The devastation of the war is also seen in the lives of other characters. Robert's mother refused to conform to the Nazis and was put into a sanatorium because she tried to get in the cattle cars with the Jews going to the extermination camps. Though she is certified crazy for her opposition to the war, her objection is clearly viewed as the only sane response to the insane war. Others are so indoctrinated by the Nazi propaganda that they decide it is better to die for their losing cause than to live in an occupied Germany.

Böll's greatest legacy is in trying to address the shadow of the Nazi past on post-war German society. Böll was a gentle, peace-loving man but he was tenacious in his efforts to acknowledge Germany's horrific past in the face of the natural tendency of those who would prefer to sweep such things under the proverbial rug. He was a leading advocate for peace. In 1972 Böll received the Nobel Prize for Literature. He was the first German to receive this award since Hermann Hesse in 1946. His work has been translated into more than 30 languages, and he is one of Germany's most widely read authors.