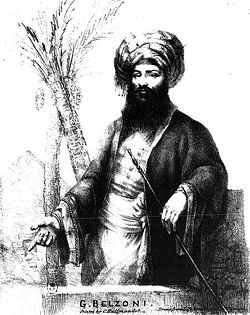 Giovanni Battista Belzoni (November 15, 1778 – December 3, 1823) was an Italian explorer, engineer, and amateur archaeologist, often regarded as one of the first Egyptologists. His discoveries include the tomb of Seti I, the temple at Karnak, and the pyramid of Khafre, making a fundamental contribution to our knowledge of ancient Egypt. Untrained in archaeological methods, Belzoni caused damage to various sites he explored. His focus on removing valuable artifacts and transporting them to museums would no longer be considered acceptable practice. Nonetheless, in Belzoni's time such practices were the norm, and his work is recognized as the opening the way to the study of ancient Egypt, a culture that has great significance in human history.

Giovanni Battista Belzoni was born in Padua, Republic of Venice (today’s Italy), into a family of 13 children to a local barber. His family was originally from Rome, and he spent most of his adolescence there. At the age of 16, he entered a monastic order and planned on spending his life as a monk, but in 1798 the occupation of the city by Napoleon’s troops drove him from Rome and caused him to change his career. He returned to Padua, where he studied hydraulics, later leaving for the Netherlands in 1800.

In 1803 Belzoni moved to England, where he married Englishwoman Sarah Bane (or Banne). Life for the newly wedded couple was rather harsh, as they had to work in a circus to provide food. Belzoni stood 6 foot 7 inches tall, broad in proportion, and his wife was of equally generous build. They performed at fairs and on the streets of London as a strongman and a strongwoman. His nickname was “The Great Belzoni.” This career lasted for ten years.

After leaving the circus in 1812, Belzoni traveled to Malta, where he met an officer of Mohammed Ali Pasha, who invited him to Egypt. Belzoni wanted to show Pasha a hydraulic machine of his own invention for raising the waters of the Nile River. Though the experiment with this engine was somewhat successful, Pasha did not like the invention and abandoned the project.

In Egypt, Belzoni met and joined British Consul General Henry Salt, who worked on moving the Egyptian treasures to the British Museum. During the next several years, Belzoni participated in removing the stone head of Ramses II and excavation at the temple Edfu, Philae, and Elephantine. He also made his famous discovery of the mummy of Psammethis.

In 1818, Belzoni entered the pyramid of Khafre at Giza, becoming the first explorer in modern times able to find the hidden entrance and actually enter the inner chambers. In the same year he led several excavations on the Red Sea and was able to identify the ruined city of Berenice.

After returning to Great Britain in 1819, he published a book entitled Narrative of the Operations and Recent Discoveries Within the Pyramids, Temples, Tombs, and Excavations in Egypt and Nubia (1820). The book received great publicity and made Belzoni famous. The work is regarded as being the first English research in Egyptology. During the next two years (1820-21) Belzoni held several exhibitions displaying many of his findings. The exhibition was held at the Egyptian Hall, Piccadilly, London. In 1822 Belzoni showed his model in Paris, France.

In 1823 Belzoni set out for Western Africa, intending to travel to Timbuktu. Having been refused permission to pass through Morocco, he chose the Guinea Coastal route. He reached Benin, but contracted dysentery at a village called Gwato. He died there and was buried under an Arasma tree in Gwato. The 'Young Memnon', aka Rameses II, at the British Museum. Photo taken by Nina Aldin Thune.

Belzoni left a significant mark on the history of explorations in Egypt. In early 1810, he learned from orientalist Johann Ludwig Burckhardt about the Abu Simbel temple in Nubia and the statue of Ramses II, known as the "Young Memnon" in Luxor. Belzoni first went to Luxor, and with help from the British Consul in Egypt, Henry Salt, unearthed and removed with great skill the colossal bust of the “Young Memnon" and shipped it to England. This was by no means an easy job, as the statue measured 9 feet high and Belzoni was equipped only with wooden poles and locally-made ropes. Belzoni somehow managed to transport the statue to the Nile River, where an England bound boat was waiting. Many agree that Belzoni probably saved the statue from a certain destruction, since the French had their eye on the statue for some time and had drilled the hole in it (in the right shoulder) to remove it with dynamite. The statue is still on prominent display at the British Museum.

Belzoni then went to Nubia and began to clear the entrance to the great temple at Abu Simbel of sand, but was unable to finish the task due to the lack of workers. He then made some excavations at Karnak, and opened up the sepulcher of Seti I (still sometimes known as "Belzoni's Tomb”). There, he collected several sculptures of the lion-headed goddess, Sekhmet, made of black granite, and sent them to England. He also pushed his investigations into the great temple of Edfu, and visited Elephantine and Philae. At the Island of Philae he removed several pieces from the temple of Isis.

After sending the first shipment to England, Henry Salt was so pleased with Belzoni that he offered him sponsorship for a second expedition to Nubia. By then, however, Belzoni had already made himself many enemies, especially in the French and Italian consuls, who collected artifacts themselves. They did not like that Belzoni took the finest art, and thus sabotaged Belzoni’s expedition. They sent their men to follow Belzoni and blacken his reputation wherever he went. Belzoni then decided not to go to Karnak, but stayed at the Valley of the Kings, where he ruined his own reputation as an archaeologist through his unprofessional methods.

Belzoni first stumbled into the tomb of King Ay, where he removed the bottom part of the sarcophagus, attributed to Ramses III (now in the Louvre Museum in Paris). He later found the lid and took it to England. He made a hole in the decorated, ancient wall to be able to pass through, destroying a large piece of original artwork.

Belzoni later found the tomb of Prince Mentuhirkhopeshef of the twentieth dynasty, and the tomb of Ramses I, the first king of the nineteenth dynasty. As he described in his diary, the paintings in the tombs were so well preserved it was as if they had been made the previous day. Unfortunately, a water flood caused significant damages to the tomb, as the water penetrated the entrance left after Belzoni’s departure.

Belzoni was the first to gain entrance into Khafre’s pyramid, the second pyramid of Giza, and to see the sarcophagus. He was also the first European in modern times to visit the oasis of Bahariya, which was rumored to be that of Siwa. He also identified the ruins of Berenice on the Red Sea.

Giovanni Belzoni was not a trained scholar, but an amateur archaeologist motivated by the thrill of a treasure hunt and the quick money received from selling artifacts to collectors. His excavations were conducted unprofessionally and sometimes resulted in the destruction of the original artwork. Belzoni was often seen as a tomb robber. However, he worked at a time when archaeology was still an amateur science, and where removal of artwork for their exhibition in museums was considered “preferable.” From the perspective of modern archaeology, such a practice might be regarded as looting, since removing artwork from their original place damages the integrity of an historic site and denies archaeologists important information that could be learned from the original setting. It also robs local people of their heritage. Regardless, Belzoni is regarded as one of the pioneers of Egyptology, whose work was the overture to the later explorations of Egypt.