Dysentery is an intestinal disorder characterized by inflammation of the intestine, pain, and severe diarrhea, with the frequent stools often containing blood and mucus. It is most often caused by infection due to bacteria, viruses, protozoa, or intestinal worms. Other causes include chemical irritants and certain medications, such as some steroids, that can affect bowel movements (Apel 2003). Dysentery formerly was known as flux or the bloody flux.

Dysentery is a preventable disease. Typically, it is spread through unsanitary water or food that contains microorganisms that damage the intestinal lining. Preventive measures include practicing good hygiene, such as washing of one's hands and proper disposal of human waste, as well as purification of drinking water and proper cooking and handling of food. Extra precaution should be followed regarding contact with infected persons and oral-anal sexual practices, even if indirect, are risky for transmission. 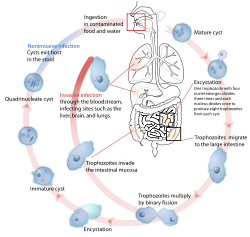 Life-cycle of the Entamoeba histolytica

Amebic dysentery, or amebic dysentery, is caused by the amoeba Entamoeba histolytica. More generally, this amoeba causes amebiasis or amoebiasis, an infectious disease that may affect various parts of the body (intestines, liver, lungs, brain, genitals, and so on) and may have a wide range of symptoms (diarrhea, fever, cramps, and so on) or be asymptomatic. Amebiasis is one of the most common parasitic diseases, with an estimated 500 million new cases each year and with as many as 100,000 people dying each year (Frey 2004). Although amoebiasis sometimes is known as amebic dyssentery, more specifically amebic dysentery refers to a type of intestinal amebiasis in which there are symptoms such as bloody diarrhea and inflammation (Frey 2004).

Amebic dysentery may be severe, in which the organisms invades the lining of the intestine and produces sores, bloody diarrhea, vomiting, chills, fevers, and abdominal cramps. An acute case of amebic dysentery may cause such complications as inflammation of the appendix (appendicitis), a tear in the intestinal wall, or a sudden severe inflammation of the colon. Of course, the amoebas may spread in the circulatory system to other parts of the body and cause amebic abcesses of the liver or brain or other serious complications. Extraintestinal amebiasis, such as involving the lungs, brain, or liver, have a relatively high mortality rate (Frey 2004).

Amebic dysentery is transmitted through contaminated food and water. Entamoeba histolytica is an anaerobic parasitic protozoan. Amoebae spread by forming infective cysts, which can be found in stools and spread if whoever touches them does not sanitize his hands. There are also free amoebae, or trophozoites, that do not form cysts.

Amoebic dysentery is well known as a cause of "traveler's dysentery" because of its prevalence in developing nations, or may be known as "Montezuma's Revenge," although it is occasionally seen in industrialized countries. About one to five percent of the general population in the United States develop amebiasis every year, but not all of these infect the intestine and many are asymptomatic; the highest rates of infection are in male homosexuals, institutionalized people, migrant workers, and recent immigrants (Frey 2004).

Shigellosis, which is often known as bacillary dysentery, is an infection of the intestinal tract by a group of bacteria called Shigella. Shigellosis rarely occurs in animals other than humans and other primates like monkeys and chimpanzees. Humans are infected by four different groups of Shigella, with the most severe attacks caused by S. dysenteriae, and the mildest attacks by S. sonnei (Kaminstein 2004). Shigellosis is another well-known cause of "traveler's diarrhea" and illness worldwide. The major symptoms are diarrhea, fever, severe fluid loss, and abdominal cramps (Kaminstein 2004).

Shigellosis's most extreme form is known as dysentery, and is characterized by very watery diarrhea (which is often blood- and mucous-streaked), rectal pain, fever, and abdominal cramping (Kaminstein 2004). Although several bacteria can cause dysentery, the term bacillary dysentery often is used interchangeably with shigellosis (Kaminstein 2004).

Shigella bacteria are extremely infectious and ingestion of only ten organisms is sufficient to result in severe diarrhea and dehydration (Kaminstein 2004). The causative organism is frequently found in water polluted with human feces, and is transmitted via the fecal-oral route. The usual mode of transmission is directly person-to-person hand-to-mouth, in the setting of poor hygiene among children.

Shigella is responsible for ten to twenty percent of all cases of diarrhea worldwide (Kaminstein 2004). In the developing world, Shigella causes approximately 165 million cases of severe dysentery and more than 1 million deaths each year, mostly in children in the developing world. Shigella also causes approximately 580,000 cases annually among travelers and military personnel from industrialized countries (WHO 2008). Shigellosis accounts for less than 10% of the reported outbreaks of foodborne illness in the United States.

Among serious complications of shigellosis is movement of the infection to areas outside of the intestine, such as the nervous system (meningitis, encephalitis) and kidneys (hemolytic uremic syndrome or HUS, which leads to kidney failure) (Kaminstein 2004).

The first and main task in managing any episode of dysentery is to maintain fluid intake using oral rehydration therapy. If this can not be adequately maintained, either through nausea and vomiting or the profuseness of the diarrhea, then hospitalization may be required for intravenous fluid replacement. Ideally, no antimicrobial therapy is started until microbiological microscopy and culture studies have established the specific infection involved. Where laboratory services are lacking, it may be required to initiate a combination of drugs including an amoebicidal drug to kill the parasite and an antibiotic to treat any associated bacterial infection.

Once recovery starts, early refeeding is advocated, avoiding foods containing lactose due to temporary (although it can persist for years) lactose intolerance (DuPont 1978; DeWitt 1989).

There are several Shigella vaccine candidates in various stages of development that could reduce the incidence of dysentery in endemic countries, as well as in travelers suffering from traveler's diarrhea (Girard et al. 2006).

Since the infectious forms are spread through food or water contamination, preventive measures include good hygiene, purification of drinking water, proper food handling and cooking, washing of hands, and proper disposal of human feces. Children at day care centers and schools should be encouraged to wash their hands. Contact with individuals infected with dysentery should be proceeded in a careful manner, and one should be careful of contaminated milk, ice cream, and vegetables. Any sexual practices involving oral-anal contact, whether directly or indirectly, carry risks of the transmission of the disease (Kaminstein 2004; Frey 2004).