Many cases of encephalitis are preventable, stressing the role of personal and social responsibility. For example, most infections are spread by hand-to-hand or hand-to-mouth contact and frequent hand washing can reduce such infections (Chamberlin and Narins 2005). One can avoid contact with those who have infectious diseases causing meningitis and insect repellents and mosquito nets can minimize danger from mosquito-borne viral infections. Herpes simplex virus (HSV) type two and HIV are sexually transmitted. Vaccines are also available for some viruses, such as polio, herpes B, equine encephalitis, and Japanese encephalitis, as well as rabies for animals (Chamberlin and Narins 2005).

Inflammation is a localized protective response of a body's living tissue to injury, infection, irritation, or allergy. Inflammation is characterized by the following quintet: redness (rubor), heat (calor), swelling (tumor), pain (dolor), and dysfunction of the organs involved (functio laesa). It is part of the innate immune system, that is, the immediate "first-line" of defense to illness or pathogens. Inflammation is usually indicated by using the English suffix "-itis," such as appendicitis, laryngitis, pancreatitis, hepatitis, and encephalitis for inflammation of the appendix, larynx, pancreas, liver, and brain, respectively.

Inflammation is neither “healthy” nor "unhealthy" on its own. Inflammation helps fight disease or injury, such as by removing pathogens and debris, and walling off infection from spreading. However, it comes at the cost of suspending the body's normal immune and catabolic processes. In the short term, this is often a valid trade-off, but in the long term it causes progressive damage.

Encephalitis results in the brain's tissues becoming swollen, which can lead to a headache or fever, or even more severe symptoms (Longe 2006). In the United States, there are about 2,000 cases of encephalitis reported each year to the Centers for Disease Control (Longe 2006).

There are two basic forms of encephalitis. Primary encephalitis occurs when the virus directly infects the brain. Secondary encephalitis occurs when the virus first infects another organ and only secondarily enters the brain, or when there is a post-infectious immune reaction to a viral infection somewhere else in the body (Longe 2006; Chamberlin and Narins 2005). Secondary infections can occur with chickenpox, measles, mumps, and rubella (Longe 2006). Encephalitis may also occur in response to vaccination against a viral disease or by infection by prions, a type of infectious agent made only of protein, lacking the nucleic acids that are part of viruses. 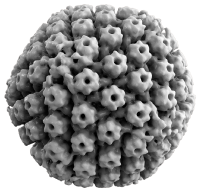 Encephalitis is most commonly caused by viral infections, which may be viruses responsible for childhood diseases, or herpes viruses, or arboviruses (those transmitted by insects, such as mosquitoes and ticks, which cause diseases collectively known as arbovirus encephalitis) (Chamberlin and Narins 2005). Common viral diseases and viruses that may result in encephalitis include (Krapp and Wilson 2005; Chamberlin and Narins 2005):

Herpes simplex encephalitis, if untreated, has a mortality rate between 60 and 80 percent; if treated, that number drops to 15 to 20 percent. About ten percent of all encephalitis cases are caused by herpes simplex virus.

In addition to viral causes, bacterial pathogens can result in inflammation of the brain, and encephalitis can also result from parasites and fungi. As noted above, an infectious particle known as a prion can also result in encephalitis, and vaccination against some viral diseases listed above can also be a causal agent.

Patients with encephalitis suffer from fever, headache and photophobia, with weakness and seizures also common. Less commonly, stiffness of the neck can occur with rare cases of patients also suffering from stiffness of the limbs, lethargy or decreased consciousness (slowness in movement, decreased alertness, fatigue, sleepiness, confusion), and clumsiness depending on which specific part of the brain is involved. The symptoms of encephalitis are caused by the brain's defense mechanisms activating to get rid of the infection. Another symptom of encephalitis is hallucination.

Adult patients with encephalitis present with acute onset of fever, headache, confusion, and sometimes seizures. Younger children or infants may present with irritability, anorexia and fever.

Neurological examinations usually reveal a drowsy or confused patient. Stiff neck, due to the irritation of the meninges covering the brain, indicates that the patient has either meningitis or meningeoncephalitis.

Blood tests can be used to detect antibodies to antigens of viruses.

Magnetic resonance imaging offers better resolution. In patients with herpes simplex encephalitis, electroencephalograph may show sharp waves in one or both of the temporal lobes. Lumbar puncture procedure is performed only after the possibility of prominent brain swelling is excluded by a CT scan examination. Diagnosis is often made with detection of antibodies against specific viral agent (such as herpes simplex virus) or by polymerase chain reaction that amplifies the RNA or DNA of the virus responsible.

Treatment is usually symptomatic (treating a patient's symptoms, rather than the disease or injury itself). Reduction of inflammation and brain swelling can be treated with corticosteroids and anti-convulsant drugs can be used to control seizures (Chamberlin and Narins 2005). Fever can be reduced with various anti-pyretic drugs, such as acetaminophen.

Reliably tested specific antiviral agents are available only for a few viral agents (e.g. acyclovir for herpes encephalitis) and are used with limited success for most infection except herpes simplex encephalitis. In patients who are very sick, supportive treatment, such as mechanical ventilation, is equally important.

Bacterial encephalitis can be treated with antibiotics.

Encephalitis lethargica is an atypical form of encephalitis which caused an epidemic from 1917 to 1928. There have only been a small number of isolated cases since, though in recent years a few patients have shown very similar symptoms. The cause is now thought to be either a bacterial agent or an autoimmune response following infection.