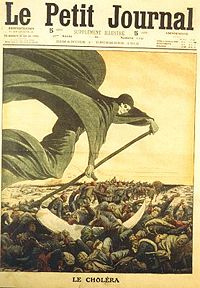 Drawing of Death bringing the cholera, in Le Petit Journal.

An epidemic (from the Greek epi- ("upon") and demos ("people")) is the rapid and extensive spreading of a disease whereby there is a temporary and substantial increase in the number of cases beyond what is expected for a given population over a given period of time. An example of an epidemic would be an influenza that impacts thousands of people in a month in a nation[1].

A pandemic is simply an epidemic that affects a large proportion of the population and spreads across a large region (for example a continent), or even worldwide. Beyond the extraordinary human suffering—such as with the bubonic plague that killed 20 million Europeans in six years (a quarter of the total population)—epidemics and pandemics have changed the course of history.

The balance of power between Athens and Sparta was shifted by typhoid fever around 430 B.C.E., which killed a quarter of the Athenian troops. The Roman Empire twice lost a quarter to a third of its population in epidemics, probably first smallpox and then measles. The two epidemics weakened the Empire and advanced the spread of Christianity as pagans fell into chaos, abandoned the sick, and fled the cities, while Christians maintained networks caring for both Christian and pagan sick and survived in significantly higher ratio than pagans, many of whom converted to the apparently superior Christian faith. Old World diseases caused epidemics killing an estimated 90 to 95 percent of indigenous North American peoples, and corn found in a village abandoned due to an epidemic nurtured the founding American Pilgrims. Typhus played a major role in the destruction of Napoleon's army in 1812, in Russia.

The ever-present threat of serious epidemics and pandemics remains pertinent today. In recent years, scientific and medical research and investments in public health personnel, education, and programs—all tempered with personal and social responsibility—have led to great advances in understanding the causal agents of particular infections and to developing and implementing public health policies designed to reduce or eliminate these epidemics. 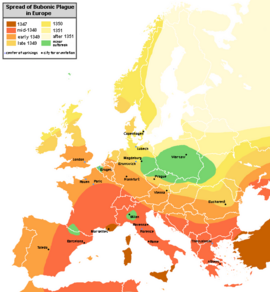 Map showing the spread of bubonic plague in Europe

Defining an epidemic can be subjective, depending in part on what is "expected." An infection may be restricted to one locale (an outbreak), more general (an "epidemic"), or even global (pandemic). Because it is based on what is "expected" or thought normal, a few cases of a very rare disease like rabies may be classified as an "epidemic," while many cases of a common disease (like the common cold) would not. Epidemic differs from outbreak since the latter term refers to smaller numbers of people or a smaller locale, such as an infection involving two or more people in the same household or within a university campus or school. Endemic is the term for a common infection or disease that is constantly present within a given population or region and that occurs at a constant rate. An example of an endemic disease is malaria in some parts of Africa (for example, Liberia) in which a large portion of the population is expected to get malaria at some point in their lifetimes.

The term "epidemic" also is used commonly to describe a similar phenomena in an animal population, but the more accurate scientific term is epizootic. In addition, "epidemic" also is used commonly for non-medical states to refer to widespread and growing societal problems, such as the behavioral epidemic of traffic accidents or road rage, or in discussions of obesity, mental illness, or drug addiction.

According to the World Health Organization (WHO), a pandemic can start when three conditions have been met:

A disease or condition is not a pandemic merely because it is widespread or kills many people; it must also be infectious. For example cancer is responsible for many deaths, but is not considered a pandemic because the disease is not infectious or contagious (although certain causes of some types of cancer might be).

The WHO Global Influenza Preparedness Plan defines the stages of pandemic influenza, outlines the role of WHO, and makes recommendations for national measures before and during a pandemic. The phases are:

Pandemics and notable epidemics through history

There are also a number of unknown diseases that were extremely serious but have now vanished, so the etiology of these diseases cannot be established. The cause of English Sweat in sixteenth century England, which struck people down in an instant, and was more greatly feared even than the bubonic plague, is still unknown.

Lassa fever, Rift Valley fever, Marburg virus, Ebola virus, and Bolivian hemorrhagic fever are highly contagious and deadly diseases with the theoretical potential to become pandemics. Their ability to spread efficiently enough to cause a pandemic is limited, however, as transmission of these viruses requires close contact with the infected vector. Furthermore, the short time between a vector becoming infectious and the onset of symptoms allows medical professionals to quickly quarantine vectors and prevent them from carrying the pathogen elsewhere. Genetic mutations could occur that might elevate their potential for causing widespread harm, thus close observation by contagious disease specialists is merited.

Antibiotic-resistant "superbugs" may also revive diseases previously regarded as "conquered." Cases of tuberculosis resistant to all traditionally effective treatments have emerged to the great concern of health professionals.

Such common bacteria as Staphylococcus aureus, Serratia marcescens, and species of Enterococcus that have developed resistance to the strongest available antibiotics, such as vancomycin, emerged in the past 20 years as an important cause of hospital-acquired (nosocomial) infections, and are now colonizing and causing disease in the general population.

In the United States, two million people per year are diagnosed with catching hospital-acquired infections after having been admitted to hospitals to receive medical care for unrelated reasons. The latest number of infections are startling, equating to four new cases per minute (2006). Of those, 90,000+ people die. Organizations like the Center for Disease Control and the World Health Organization (WHO) are leading the effort to eradicate these avoidable, yet deadly infections.

HIV—the virus traced to the disease AIDS—is now considered a global pandemic with infection rates as high as 25 percent in southern and eastern Africa. Effective education about safer sexual practices and bloodborne infection precautions training have helped to slow down infection rates in several African countries, including Angola, sponsoring national education programs. Infection rates are rising again in Asia and the Americas.

In 2003, there were concerns that SARS, a new, highly contagious form of atypical pneumonia caused by a coronavirus dubbed SARS-CoV, might become pandemic. Rapid action by national and international health authorities such as the World Health Organization helped slow transmission and eventually broke the chain of transmission, ending the localized epidemics before they could become a pandemic. The disease has not been eradicated, however, and could re-emerge unexpectedly, warranting monitoring and case reporting of suspicious cases of atypical pneumonia.

In February 2004, avian influenza virus was detected in birds in Vietnam, increasing fears of the emergence of new variant strains. It is feared that if the avian influenza virus combines with a human influenza virus (in a bird or a human), the new subtype created could be both highly contagious and highly lethal in humans. Such a subtype could cause a global influenza pandemic, similar to the Spanish Flu, or the lower mortality pandemics such as the Asian Flu and the Hong Kong Flu.

From October 2004 to February 2005, some 3,700 test kits of the 1957 Asian Flu virus were accidentally spread around the world from a lab in the United States[8]. These flu testing kits were to be used to help pathology laboratories improve their accuracy by sending them unidentified samples of various bacteria and viruses, but the 1957 pandemic strain was sent rather than something such as a strain of the various influenza A viruses.

In May 2005, concern about the possibility of avian influenza led scientists to urgently call nations to prepare for a global influenza pandemic that could strike as much as 20 percent of the world's population.

In October 2005, cases of the avian flu (the deadly strain H5N1) were identified in Turkey. EU Health Commissioner Markos Kyprianou said: "We have received now confirmation that the virus found in Turkey is an avian flu H5N1 virus. There is a direct relationship with viruses found in Russia, Mongolia, and China." Cases of bird flu were also identified shortly thereafter in Romania, and then Greece. Possible cases of the virus have also been found in Croatia, Bulgaria and in the United Kingdom[9]. However, by the end of October, only 67 people had died as a result of H5N1, which was atypical of previous influenza pandemics.