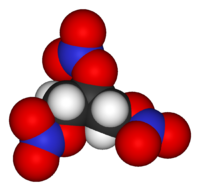 3D model of a molecule of nitroglycerin, the explosive component of dynamite

Dynamite is the first safely manageable chemical explosive stronger than black powder. It is based on the explosive potential of nitroglycerin, with diatomaceous earth (Kieselguhr) as an adsorbent. Dynamite is considered a "high explosive," which means it detonates rather than deflagrates. It was invented by Swedish chemist and engineer Alfred Nobel in 1866, in Krümmel (Hamburg, Germany), and patented in 1867.

Nobel patented his invention in October 1867. He originally sold dynamite as "Nobel's Blasting Powder." After its introduction, dynamite rapidly gained popularity as a safe alternative to gunpowder and nitroglycerin. Nobel tightly controlled the patent and unlicensed duplicators were quickly shut down. Although a few U.S. businessmen got around the patent by using a slightly different formula, dynamite brought Nobel great wealth, which he used to found the Nobel Prize. After realizing dynamite's potential military uses, Nobel founded the prize as a way to promote peace and science for the benefit of mankind.

For several decades from the 1940s, the biggest producer of dynamite in the world was the Republic of South Africa, where De Beers established a factory in 1902 at Somerset West. The explosives factory was later operated by AECI (African Explosives and Chemical Industries). The demand for the product came mainly from the country's vast gold mines, centered on the Witwatersrand. The factory at Somerset West was in operation in 1903 and by 1907 was already producing 340,000 cases (weighing 50 pounds each) annually. A rival factory at Modderfontein was producing another 200,000 cases a year.[1]

One of the drawbacks of dynamite was that it was dangerous to manufacture. There were two massive explosions at the Somerset West plant in the 1960s, and some workers died. Yet, loss of life was limited by the modular design of the factory and earth works and plantations of trees that directed the blasts upwards. After 1985, production of dynamite at the factory was phased out.[2]

In the United States, dynamite was manufactured by the DuPont corporation well into the 1990s. It was eventually eclipsed by "water gel" explosives, which are safer to handle. [3] 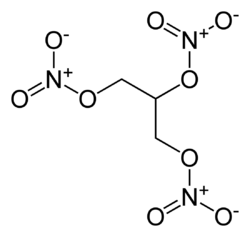 2D diagram of a molecule of nitroglycerin.

Dynamite consists of three parts nitroglycerin, one part diatomaceous earth, and a small admixture of sodium carbonate. This mixture is formed into short sticks and wrapped in paper. Each stick is often 20 centimeters (roughly eight inches) long and 2.5 centimeters (one inch) in diameter, but other sizes also exist.

Over time, the dynamite stick will "weep" or "sweat" its nitroglycerin, which can then pool in the bottom of the box or storage area, and crystals will form on the outside of the stick. This creates a very dangerous situation. Although the possibility of explosion without a blasting cap is minimal, old dynamite should not be handled. Qualified assistance should be sought immediately.

A priming device is used to initiate the explosion of dynamite. A compartment within the shell contains explosive material that is more sensitive than the dynamite to be detonated. Also included in primer units are passageways that are open at both ends of the shell for receiving and housing an electric blasting cap.

The chief uses of dynamite were in construction, mining, and demolition. However, newer explosives and techniques have replaced dynamite in many applications. Dynamite is still used mainly as a bottom charge or in underwater blasting. Dynamite has been used in armed conflicts and criminal sabotage, mainly to destroy bridges and other ways of travel, to slow the advance of supplies or enemy troops.

The familiar thin reddish cylinder, equipped with a fuse or blasting cap, is a stock movie prop. In comedies and cartoons, dynamite commonly explodes with the only effect being a blackened face and wild hair. In dramas, the impending explosion of lit dynamite parcels provides movie tension. In action films, dynamite is often used as a weapon. In addition, dynamite can be found in many cartoon-style computer games and is usually very powerful in contrast to other weapons in a particular game.

Dynamite as a metaphor

The term dynamite may also be used in a metaphorical sense. For instance, one may describe a controversial (and possibly scandalous) public issue as political dynamite, or an exciting game as a dynamite game.