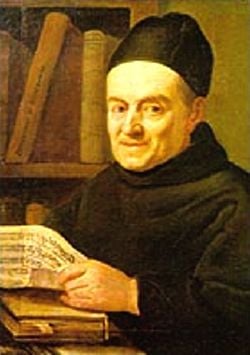 Giovanni Battista Martini, also known as Padre Martini (April 24, 1706 – August 3, 1784) was an Italian musician, composer, and music theorist who, through his compositions and treatises, demonstrated the principles of a meaningful musical life and an understanding of philosophy and the classics. He developed the ability and means to spread the gospel through music and was a teacher of several noted musicians and composers, including Mozart.

As an accomplished music theorist in counterpoint, Martini established a school of composition to further explicate the rules and regulations of music theory. Of great value to musicologists are Martini's "Storia della musica," a treatise on ancient music, the "Saggio del contrapunto," a collection of musical examples from the Italian and Spanish schools, a dictionary of ancient musical terms, and a work on the theory of numbers as applied to music. Martini's scholarship helped to explain how ancient music was written and performed.

His father, Antonio Maria Martini, a violinist, taught him the elements of music and the violin; later he learned singing and harpsichord playing from Padre Pradieri, and counterpoint from Antonio Riccieri. Having received his education in classics from the fathers of the Oratory of San Filippo Neri, Martini afterward entered upon a noviciate at the Franciscan monastery at Lugo, at the close of which he was received as a Minorite on September 11, 1722.

In 1725, though only nineteen years old, he received the appointment of chapel-master in the Franciscan church at Bologna, where his compositions attracted attention. At the invitation of amateurs and professional friends he opened a school of composition at which several celebrated musicians were trained; as a teacher he consistently declared his preference for the traditions of the old Roman school of composition. Padre Martini was a zealous collector of musical literature, and possessed an extensive musical library. Charles Burney estimated it at 17,000 volumes; after Martini's death a portion of it passed to the Imperial library at Vienna, the rest remaining in Bologna, now in the Liceo Rossini.

Most contemporary musicians speak of Martini with admiration, and Leopold Mozart consulted him with regard to the talents of his son, Wolfgang Amadeus Mozart.

In 1758 he was invited to teach at the Accademia Filarmonica di Bologna.

The greater number of Martini's sacred compositions remain unprinted. The Liceo of Bologna possesses the manuscripts of two oratorios; and a requiem, with some other pieces of church music, are now in Vienna. Litaniae atque antiphonae finales B. V. Mariae were published at Bologna in 1734, as also were twelve Sonate d'intavolalura; six Sonate per l'organo ed il cembalo were published in 1747; and Duetti da camera in 1763. Martini's most important works are his Storia della musica (Bologna, 1757-1781) and his Saggio del contrapunto (Bologna, 1774-1775). The former, of which the three published volumes relate wholly to ancient music, and thus represent a mere fragment of the author's vast plan, exhibits immense reading and industry, but is written in a dry and unattractive style, and is overloaded with matter that cannot be regarded as historical. At the beginning and end of each chapter there are puzzle-canons, wherein the primary part or parts alone are given, and the reader has to discover the canon that fixes the period and the interval at which the response is to enter. Some of these are exceedingly difficult, but Cherubini solved the whole of them.

The Saggio is a learned and valuable work, containing an important collection of examples from the best masters of the old Italian and Spanish schools, with excellent explanatory notes. It treats chiefly of the tonalities of the plain chant, and of counterpoints constructed upon them. Besides being the author of several controversial works, Martini drew up a Dictionary of Ancient Musical Terms, which appeared in the second volume of GB Doni's Works; he also published a treatise on The Theory of Numbers as Applied to Music. His celebrated canons, edited by Pio Cianchettini and published in London in about 1800, show him to have had a strong sense of musical humor.

Retrieved from https://www.newworldencyclopedia.org/p/index.php?title=Giovanni_Battista_Martini&oldid=1005268
Categories:
Hidden category:
This page was last edited on 22 June 2017, at 20:39.
Content is available under Creative Commons Attribution/Share-Alike License; additional terms may apply. See Terms of Use for details.