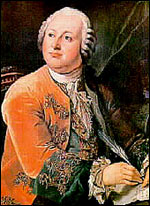 Mikhail Vasilyevich Lomonosov (Михаи́л Васи́льевич Ломоно́сов) (November 19 [O.S. November 8] 1711 – April 15 [O.S. April 4] 1765) was a Russian writer and polymath who made important contributions to literature, education, and science Among his most important contributions are the founding of Moscow State University, the revision of the Russian literary language, and several important scientific contributions. His scientific studies led to an interest in the technology of mosaics. He established the first factory outside of Italy to produce mosaics, and was responsible for producing forty mosaics, of which more than half still survive. While he lived a century before Pushkin and the great flowering of Russian poetry, Lomonosov was among the finest poets of his day, contributing some of the finest spiritual odes and occasional poetry written during the 18th century. His contributions to Russian society were truly incomparable.

From peasant to scholar

Lomonosov was born in the village of Denisovka (the name of which was afterwards changed to Lomonosovo in honor of the poet), situated on an island not far from Kholmogory, in the Far North of Russia. His father, a fisherman, took the boy when he was ten years of age to assist him in his work, but his eagerness for knowledge was unbounded. The few books accessible to him he almost learned by heart and, seeing that there was no chance of pursuing education at home, he resolved to go by foot to Moscow.

An opportunity occurred when he was seventeen, and through the intervention of friends he obtained admission into the Slavic Greek Latin Academy. There his progress was very rapid, especially in Latin, and in 1734 he was sent from Moscow to Saint Petersburg. There, too, his proficiency, especially in physical science, was marked, and he was one of the young Russians chosen to complete their education in foreign countries. 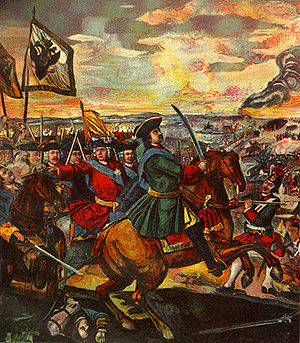 The most grandiose of Lomonosov's mosaics depicts the Battle of Poltava.

He accordingly went to the University of Marburg in Hesse, Germany, at that time one of the most important universities in Europe due to the presence of the most eminent German Enlightenment philosopher of his time, Christian Wolff — at a time when universities in general were in some decay. Lomonosov studied with Wolff as one of his personal students; Wolff would remain influential for Lomonosov both philosophically and as a science administrator (another of Wolff's talents).

During his Marburg time, he also began to write poetry, imitating German authors, among whom he is said to have especially admired Johann Christian Günther. His Ode on the Taking of Khotin from the Turks was composed in 1739, attracting a great deal of attention at Saint Petersburg. During his residence in Germany, Lomonosov married a native of that country, and found it difficult to maintain his increasing family on the scanty allowance granted to him by the Russian Academy of Science, which was in any case administered irregularly. His circumstances became desperate, so he resolved to leave the country and to return home to Saint Petersburg. In 1743, his wife moved there, as well.

On his arrival in Russia he rapidly rose to distinction, and was made professor of chemistry in the Saint Petersburg State University, where he ultimately became rector. Eager to improve Russian education, Lomonosov joined his patron Ivan Shuvalov in founding the Moscow State University (later named after him) in 1755. In 1764 Lomonosov was appointed to the position of a secretary of state.

In 1756, he attempted to replicate Robert Boyle's celebrated experiment of 1673, concluding that the phlogiston theory, commonly accepted at the time, is false. Anticipating the discoveries of Antoine Lavoisier, he wrote in his diary: "Today I made an experient in hermetic glass vessels in order to determine whether the mass of metals increases from the action of pure heat. The experiments—of which I append the record in 13 pages—demonstrated that the famous Robert Boyle was deluded, for without access of air from outside the mass of the burnt metal remains the same."

He regarded heat as a form of motion, suggested the wave theory of light, contributed to the formulation of the kinetic theory of gases, and stated the idea of conservation of matter in the following words: "All changes in nature are such that inasmuch is taken from one object insomuch is added to another. So, if the amount of matter decreases in one place, it increases elsewhere. This universal law of nature embraces laws of motion as well, for an object moving others by its own force in fact imparts to another object the force it loses" (first articulated in a letter to Leonhard Euler dated 5 July, 1748, rephrased and published in Lomonosov's dissertation "Reflexion on the solidity and fluidity of bodies," 1760).

Lomonosov was the first person to record the freezing of mercury, and to hypothesize the existence of an atmosphere on Venus based on his observation of the transit of Venus of 1761 in a small observatory near his house in Petersburg. Believing that nature is subject to regular and continuous evolution, he demonstrated the organic origin of soil, peat, coal, petroleum, and amber. In 1745 he published a catalogue of over 3,000 minerals, and in 1760 he explained the formation of icebergs. 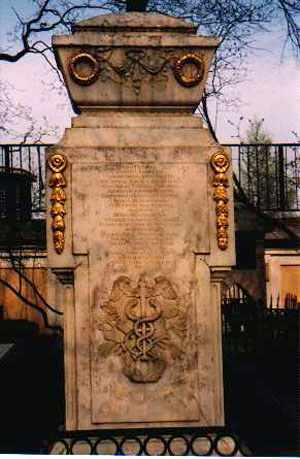 Lomonosov was proud to restore the ancient art of mosaics. In 1754 in his letter to Leonard Euler he wrote that his three-year long experimentations on the effects of the chemistry of minerals on their color led to him became very involved in mosaics art. In 1763 he sets up a glass factory that produced the first stained glass mosaics outside of Italy. There were forty mosaics attributed to Lomonosov, only twenty-four of which have survived. Among the best is the portrait of Peter the Great and the Battle of Poltava, measuring 4.8 x 6.4 meters [1], [2],[3].

In 1755 he wrote a grammar that reformed the Russian literary language by combining Old Church Slavonic with the vernacular tongue. To further his literary theories, he wrote more than 20 solemn ceremonial odes, notably the Evening Meditation on God's Grandeur. To his later poems he applied an idiosyncratic theory that words containing vowel sounds made in the front of the palate (in Russian, E, I, YU) should be used when depicting tender subjects, and those made with the back of the palate (again, in Russian the vowel sounds O, U, Y) to describe things that may cause fear ("like anger, envy, pain, and sorrow"). This theory is a version of what is known as sound symbolism. Lomonosov published his own history of Russia in 1760. Most of his accomplishments, however, were unknown outside Russia until long after his death.

As a poet, Lomonosov displayed the same kind of breadth of interest as he did in the rest of his work. He wrote "emblematic and panegyrical verse for coronations, illuminations, ship launchings, imperial arrivals and departures, name days [of the saint for whom the person was named], birthdays, anniversaries, and other celebrations." (Terras, 128) Like his contemporaries, he also wrote spiritual odes and versions of the Psalms. His spiritual odes are widely considered the best of his generation as was his long, didactic poem, "Epistle on the Usefulness of Glass." (Terras, 130)

Lomonosov died in Saint Petersburg in 1765, leaving no male heirs. Among his female heirs, a granddaughter married the famous General Raevsky. In 1948, the underwater Lomonosov Ridge in the Arctic Ocean was named in his honor. A lunar crater also bears his name.

Retrieved from https://www.newworldencyclopedia.org/p/index.php?title=Mikhail_Lomonosov&oldid=1086531
Categories:
Hidden category:
This page was last edited on 9 November 2022, at 17:53.
Content is available under Creative Commons Attribution/Share-Alike License; additional terms may apply. See Terms of Use for details.