For the building intended for indoor sports or exercise, see gym.

A gymnasium is a type of school providing secondary education and college preparatory. It is most common in parts of Europe, particularly Germany, where it constitutes the middle or last tier of secondary education, preparing students to enter university. Deriving from the Greek idea of a school for both physical and intellectual education, the German gymnasium school developed based on ideals of Humanism in a move away from church-dominated theologically based education, and was designed for those students of the highest academic ability. Schools developed in England for the most academically gifted students were known as grammar schools, while the term "gymnasium" retained the physical education component, and is used to refer to a facility for sports and exercise.

Originally the gymnasium was designed to provide a broad-based, albeit academically oriented, education. The final examination on completing studies at the gymnasium has been used as the main admissions criterion for German universities. Today, however, students may specialize in more practical areas of study, such as technology, or, in certain vocational gymnasia, combine their studies with vocational training.

While a number of countries have gymnasia, or similar schools, as part of their education system, issues raised by this type of system include selectivity and the need for sufficient opportunities to change programs or schools. Fundamentally, the goal of education is to nurture a young person's growth into mature adulthood, allowing them to achieve mastery in whichever area they have interest and talent, so that they can fulfill their individual potential, relate to others in society as good citizens, and exercise creative and loving dominion over their environment. The gymnasium school was established to be part of such a system, although as human knowledge and spirituality has advanced the gymnasium too must adapt to be successful in its role.

The Gymnasium Haganum seen from the Zoutmanstraat in Den Haag, The Netherlands, about 1910.

Gymnasium schools originated out of the turmoil from the Protestant Reformation, which helped to dislodge the grip of the Catholic Church on many areas of life, including education. The concept was also inspired and developed based on the new ideals of Humanism. Individual schools that taught and focused more upon rhetoric, grammar, logic, mathematics, astronomy, music, and geometry more than the traditional curriculum of theology began to spring up in the German states.[2]

In 1528, the state of Saxony created the first general system of schools which provided for the gymnasia. It was not long before similarly structured schools began to be established in Scandinavia and Eastern Europe, partially due to the desire to break the stronghold the Catholic Church held on schooling at the time. While these schools flourished for a number of years, the instability of Europe kept the schools from expanding until the influence of such prominent thinkers as Johann Gottfried von Herder, Immanuel Kant, and Friedrich von Schiller who helped to re-establish the humanist roots of the gymnasium school. Later, the rise in importance of the natural and physical sciences and developments in technology all helped to create a new set of gymnasium schools that focused less on classical education and more on liberal arts and the sciences.[2] 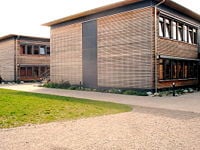 Usually the students that attend a gymnasium school in Germany are the most academically strong students upon leaving primary school. The gymnasium school helps to prepare students to enter a university, and is the most rigorous and prestigious level of secondary education in Germany. Gymnasia are thus meant for the more academically-minded students, who are sifted out at about the age of 10–13, a system similar to the eleven plus exam formerly used to select grammar school entrants in the United Kingdom. Those students who are not qualified to enter gymnasia attend one of the three other types of German secondary schools: Realschule, Hauptschule, or Gesamtschule.

Some gymnasia provide general education, others have a specific focus. The three traditional specific branches are:

Today, a number of other areas of specialization exist, such as gymnasiums specializing in economics, technology, or domestic sciences.

There is also the vocational gymnasium (berufliches Gymnasium, or Fachgymnasium). Students at the vocational Gymnasium spend the most time in class, because they take subjects such as vocational studies and economics in addition to academic subjects in the regular gymnasium curriculum. These students are expected to "demonstrate a level of commitment similar to that of employees at a large corporation."[3]

The number of years of study at a gymnasium differs from region to region in Germany. It consists of seven years in Berlin and Brandenburg (primary school includes six years in both as opposed to four years in the rest of Germany) and eight in Bavaria, Hessen, and Baden-Württemberg among others.

At the end of their schooling, students usually undergo a cumulative written and oral examination called the Abitur. The Abitur exams which complete the gymnasium education are centrally drafted and controlled (Zentralabitur) in almost all German states. Successfully passing this exam is one of the admissions criteria to enter a German university. Those students who decide to leave gymnasium after 9th grade, usually because they are not satisfactorily completing their coursework, must complete the leaving examination of the Hauptschule and those who leave after 10th grade must take the leaving examination of the Realschule, the Mittlere Reife. After 10th grade, gymnasium students may quit school for at least one year of job training if they do not wish to continue their studies.

Gymnasium schools can also be found in several regions of western Europe, albeit with some slight cultural differences.

In Austria, the gymnasium consist of eight years. The usual combination is English, French, and Latin, although sometimes French can be exchanged for another foreign language (such as Spanish, Italian, or Russian) or a more technical subject like Engineering drawing or further hours of biology, physics, or chemistry. Latin is almost obligatory, since it is a requirement for several courses of study in Austria.[4] 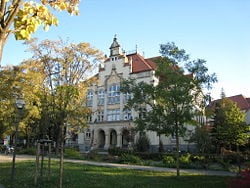 Scandinavia has many different types of gymnasium schools. Denmark has a three year (sometimes four depending upon if the student is involved with music or athletic programs) school that is more like a preparatory school or the first years of college than high school. Everyone is eligible to go to a high school, but you have to be deemed competent to enter a gymnasium. Danish gymnasia are also available in an intensive two year program leading to the Højere Forberedelseseksamen ("Higher Preparatory Exam").[5] In Sweden, the gymnasium consist of three years, starting at age 16 after nine years of primary school. Both primary school and gymnasium are free of charge and financed by taxes. Finish students can enter a gymnasium school after nine years of primary school, starting at age 15 or 16, and after passing the Matriculation Examination.

In the Netherlands the gymnasium consists of six years in which pupils study the same subjects as their German counterparts, with the addition of compulsory Ancient Greek, Latin, and "KCV," history of the Ancient Greek and Roman culture and literature.[6]

In Eastern Europe, there are gymnasia located in such countries as the Czech Republic, which can start its students anywhere between the ages of 10 and 15. The age one enters a Czech gymnasium determines how long one attends the school. Most students graduate by the age of 19. In Greece, gymnasium schools start students at age 12 after six years of elementary school. Compulsory for all children, gymnasium school is followed by the non-mandatory Lyceum (ages 15-18) for students with academic aspirations, or the technical vocational educational school (TEE) for students who prefer vocational training.[8]

There are also similar schools in such countries as Hungary, the Ukraine, Latvia, Lithuania, Poland, Romania, and Russia, although each determine their own structure and curriculum.

There are several gymnasium-like schools in countries outside of Europe. In South America, Argentina has the Colegio Nacional de Buenos Aires, which students attend for six years. There is also an eight-year gymnasium in Tucuman. Brazil Humboldt Schule of São Paulo is a German School in São Paulo. There are several more Gymnasia in the country, some of which receive fuding from the German Government.[9]