Gym, a shortened form of gymnasium, refers to facilities intended for indoor sports and exercise. Originating in Ancient Greece, where they included both academic and physical training, gymnasiums today are common places of physical education and exercise around the world. In certain countries, particularly Germany, the intellectual education has been retained in secondary schools with this name.

For young children play has been recognized as a valuable, even essential, component of learning and psychological development. The gymnasium is thus a valuable asset for any community, assisting in the development of youth. Adults too benefit greatly from physical exercise and training, since sports and physical fitness involve more than training the body but is based on the understanding that fitness and physical training helps the mind. In that sense, the original purpose of the ancient Greek gymnasium continues to be fulfilled in the modern gym. The gymnasium is a place where training in this way can be undertaken by people of all ages in a structured and safe environment.

The word Gymnasium is derived from the Greek word γυμνάσιον (gymnasion) from gymnos which means naked. Thus the word means "place to be naked" and was used in Ancient Greece to designate a locality for the education of young men, including physical education (gymnastics, or exercise) which was customarily performed naked,[1] as well as bathing, and studies.

The later meaning of intellectual education persisted in German and other languages to denote a certain type of school providing secondary education, the Gymnasium, whereas in English the meaning of physical education was retained in the word gym.[2]

Today the term gymnasium (plural: gymnasiums or gymnasia) is used in the sense of a sports facility. Gyms today are multi-use facilities, offering a range of sporting and physical activities, alongside such things as massages, and other things usually attributed to a health spa. Gym also can refer informally to a physical education course in American students' parlance, and to a metal frame support used in outdoor play equipment, as in "jungle gym."[3]

Pompeii gymnasium, seen from the top of the stadium wall. The depression center-left was filled with water and used for swimming practice as well. Mock sea battles (naumachiae) were conducted in the flooded arena floor or a specially dug pool in the arena. According to Oscar Brockett in his History of the Theatre, 5th Ed. (1987), p. 70,

Perhaps the most spectacular of all entertainments were the naumachiae, or sea battles. The first was given in 46 B.C.E. by Julius Caesar on a lake dug for the occasion; it featured a battle involving 2,000 marines and 6,00 oarsmen. Later the amphitheatres were sometimes flooded for such events. By far the most ambitious of all the naumachiae was given in 52 C.E. on the Fucine Lake east of Rome to celebrate the completion of a water conduit. On that occasion, 19,000 participants fought and many perished.

To the right (partially obscured by a tree trunk) is a line of carbonized tree stumps, remains of trees (each hundreds of years old) that were part of the palaestra and were burned in the volcanic eruption of Mount Vesuvius in 79. Between these and the colonnade is a line of saplings recently planted as a replacement.

The gymnasium was formed as a public institution (a private school) where boys received training in physical exercises. Its organization and construction were designed to suit that purpose, although the gymnasium was used for other functions as well.

Gymnasia were typically large structures containing spaces for each type of exercise as well as a stadium, palaestra, baths, outer porticos for practice in bad weather, and covered porticos where philosophers and other "men of letters" gave public lectures and held disputations.[6] All Athenian gymnasia were located outside the city walls due to the large amount of space required for construction.[6]

The ancient Greek gymnasium soon became a place for more than exercise. This development arose through recognition by the Greeks of the strong relation between athletics, education, and health. Accordingly, the gymnasium became connected with education on the one hand and medicine on the other. Physical training and maintenance of health and strength were the chief parts of children's earlier education.[7] Except for time devoted to letters and music, the education of boys was solely conducted in the gymnasium, where provisions were made not only for physical pedagogy but for instruction in morals and ethics. Philosophers and sophists frequently assembled to hold talks and lectures in the gymnasium; thus the institution became a resort for those interested in less structured intellectual pursuits in addition to those using the place for training in physical exercises.

In Athens there were three great public gymnasia: the Academy, the Lyceum, and the Cynosarges,[6] each of which was dedicated to a deity whose statue adorned the structure and each of which was rendered famous by association with a celebrated school of philosophy. Plato's teaching in the Academy gave great recognition to that gymnasium, Aristotle conferred much fame on the Lyceum, and the Cynosarges was the resort of the Cynics.

Gymnasiums in Germany were an outgrowth of the Turnplatz, an outdoor area for gymnastics, promoted by German educator Friedrich Ludwig Jahn. He started the Turnverein movement in the early nineteenth century when Germany was occupied by Napoleon. The Turnvereine ("gymnastic unions") were not only athletic, but also political, reflecting their origin in similar "nationalistic gymnastic" organizations in Europe.

Jahn had studied theology and philology from 1796 to 1802 at Halle, Göttingen at the University of Greifswald. After the Battle of Jena-Auerstedt in 1806 he joined the Prussian army. In 1809 he went to Berlin, where he became a teacher at the Gymnasium zum Grauen Kloster and at the Plamann School.[8]

Brooding upon what he saw as the humiliation of his native land by Napoleon, Jahn conceived the idea of restoring the spirits of his countrymen by the development of their physical and moral powers through the practice of gymnastics. The first Turnplatz, or open-air gymnasium, was opened by Jahn in Berlin in 1811, and the Turnverein movement spread rapidly. Young gymnasts were taught to regard themselves as members of a kind of guild for the emancipation of their fatherland. This nationalistic spirit was nourished in no small degree by the writings of Jahn.[8] 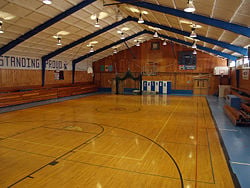 Gymnasiums in the United States predate the Turner movement. A public gymnasium movement sprung up in the 1820s and 1830s but was eclipsed by the growth of school, college, and the Young Men's Christian Association (YMCA) gymnasiums. The American YMCA first organized around 1851 in Boston, and in ten years there were some two hundred YMCAs across the country, most of which provided gymnasiums for exercise and games.[9]

The first college gymnasium probably was the one built at Harvard University in 1820. Although privately owned, it was maintained for the use of the students. Like most of the gymnasiums of the period, it was equipped with gymnastic apparatus. The United States Military Academy at West Point built a gym during the same era. A few other American colleges built gyms by the 1850s. Harvard opened a new brick gymnasium in 1860 with two bowling alleys and dressing rooms in addition to the gymnastic facility.

The 1920s was a decade of prosperity that witnessed the building of large numbers of public high schools with gymnasiums. Over the course of the twentieth century, gymnasiums were re-conceptualized to accommodate the popular team and individual games and sports that have supplanted gymnastics in the school curriculum.

Today, having a gymnasium is the norm for virtually all colleges and high schools, as well almost all middle and many elementary schools in the industrialized world. These facilities are utilized for physical education, intramural sports, and for interscholastic athletics.

Also popular are privately owned gyms, where membership can be attained through payment or invitation. These modern gyms can be small businesses, or part of a chain owned by a large corporation. Health and well-being has become an increasingly popular industry, and the proliferation of health trainers and advisors has helped create specialized gyms, designed to help people lose weight and improve their physical fitness.

The outdoor gym concept originates from China where was used as a national fitness campaign prior to the 2008 Summer Olympics. The Chinese outdoor gyms blend the ideas of jogging paths and obstacle courses, setting aside public areas where people can do a variety of exercises. The concept was so effective in raising fitness and health levels that they constructed over 37 million square feet of outdoor gymnasiums across China in the decade 1998 to 2008.[10] The participation levels in physical activity steadily increased since the outdoor gym concept was introduced.

Other countries followed suit, such as Great Britain, where the Newham council in partnership with the University of East London successfully piloted Britain's first free outdoor gym in 2006. Students and members of the community can use for free a high quality robust, safe, and accessible outdoor gym facility.[11] In the United States, James Sargen introduced the outdoor gym, creating TriActive America. Today, TriActive America's fitness zones and fitness trails can be found across the nation, from hotels to YMCAs, to community areas to military bases, and more.[12]