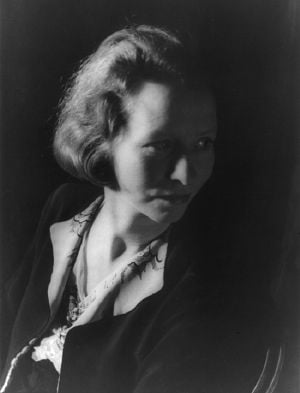 Edna St. Vincent Millay (February 22, 1892 – October 19, 1950) was a lyrical poet and playwright and the first woman to receive the Pulitzer Prize for Poetry. During her own time, Millay was almost as famous for her unusual, Bohemian lifestyle and opinions on social matters as she was for her actual poetry. During much of her career she lived the life of a minor celebrity. In time, however, critical estimation of her poetry has caught up with her celebrity, and in recent decades it has become increasingly clear just how important Millay is for the history of early twentieth-century American literature.

Millay lived and wrote during the early decades of the twentieth-century, a period in which the literary Modernism of T. S. Eliot and Ezra Pound dominated American poetry. Millay, however, was a distinctly un-Modern poet whose works have much more in common wiht those of Robert Frost or Thomas Hardy; her poetry is always formal, masterfully written to the strictures of rhyme and meter. During her times a number of poets and critics argued fiercely over the form poetry should take in the rapidly changing times of the twentieth-century; Millay, for her part, was not particularly vocal in these debates, because her works speak for themselves. Millay proved that the old forms could retain their validity in a changing world. Her sonnets are often considered to be the finest written in the twentieth-century, and her short, lyrical poems are unrivaled for their elegance and musicality. Millay's influence extends to a number of poets of the latter twentieth-century, Elizabeth Bishop notably among them. Millay's poetry provides a glimpse at another form of poetry, full of sweetness and light, that remained stable and clear throughout the turmoil of Modernism.

Millay was born in Rockland, Maine, to Cora Lounella, a nurse, and Henry Tollman Millay, a schoolteacher who would later become superintendent of schools. Her middle name is derived from St. Vincent's Hospital in New York, where her uncle's life had been saved just prior to her birth.

In 1904, Cora officially divorced Millay's father for financial irresponsibility, though they had been separated for some years prior. Struggling financially, Cora and her three daughters, Edna (who would later insist on being called "Vincent"), Norma and Kathleen, moved from town to town, counting on the kindness of friends and relatives. Though poor, Cora never traveled without her trunk full of classic literature — including William Shakespeare, John Milton, and more — which she enthusiastically read to her children in her thick Irish brogue. Finally the family settled in Camden, Maine, moving into a small house on the property of Cora's wealthy aunt. It was in this modest house in the middle of a field that Millay wrote the first of the poems that would catapult her to literary fame.

Cora taught her daughters to be independent and to speak their minds; Millay took this advice well to heart, though it did not always sit well with the authority figures in her life. Millay preferred to be called "Vincent" rather than Edna, which she found plain—her grade school principal, offended by her frank attitudes, refusing to call her Vincent; instead called her by any woman's name that started with a V. [1]

At Camden High School, Millay began nurturing her budding literary talents, starting at the school's literary magazine, The Megunticook, eventually having some of her poetry published in the popular children's magazine St. Nicholas, the Camden Herald and, significantly, the anthology Current Literature, all by the age of 15.

Millay rose to fame with her poem "Renascence" (1912), and on the strength of this poem alone she was awarded a scholarship to Vassar College. After her graduation in 1917, she moved to New York City. "Renascence" provides a glimpse at Millay's early style, which would remain largely unchanged as her techinique matured to perfection. Like much of her work "Renascence" is characterized by its deceptively simple language and piercingly clear images. The poem is heavily symbolic, describing a narrator who, bored with life, gazes up into the sky, only to come in contact with "Immensity made manifold." At two-hundred lines long the poem is too long to quote in full, but a short excerpt from its memorable opening stanzas follows:

The sky, I thought, is not so grand;
I ’most could touch it with my hand!
And reaching up my hand to try,
I screamed to feel it touch the sky.
I screamed, and—lo!—Infinity
Came down and settled over me;
Forced back my scream into my chest,
Bent back my arm upon my breast,
And, pressing of the Undefined
The definition on my mind,
Held up before my eyes a glass
Through which my shrinking sight did pass
Until it seemed I must behold
Immensity made manifold;
Whispered to me a word whose sound
Deafened the air for worlds around,
And brought unmuffled to my ears
The gossiping of friendly spheres,
The creaking of the tented sky,
The ticking of Eternity.

In New York, Millay lived in Greenwich Village. Millay spent a number of years continuing to write poetry; to support herself financially she wrote hack-work for newspapers under the pseudonym Nancy Boyd. She published "Renascence" along with a number of other poems in 1917, but her great breakthrough would be in in 1923 when she won the Pulitzer Prize for Poetry with the publication of The Harp-Weaver, and Other Poems. "The Harp-Weaver" is still considered one of Millay's most memorable poems; like "Renascence," the poem is written in a simple, lyrical style that includes a number of highly symbolical sequences and extended metaphors. The poem tells of a destitute mother who, having no other means to provide for her son, begins to weave clothing to keep him warm for the winter on a magical harp. She spends all Christmas night "weav-weav-weaving" for her son. By morning, her son discovers a pile of "clothes of a king's son / just my size"—but the effort of weaving has cost his mother's life. The poem, again, is too lengthy to be excerpted in full, but here is a short passage from what was Millay's most popular poem in her own lifetime:

That was in the early fall.

When came the late fall,

Sticking through your clothes!

And where you'll get a jacket from

Your daddy's in the ground,

And can't see the way I let

His son go around!"
And she made a queer sound.

Millay's literary reputation was significantly damaged by poetry she wrote in support of the Allied war effort during World War II. At the time, support for the war effort was very unpopular among artistic circles, and Millay never fully regained her prestige among her literary peers. As the critic Merle Rubin noted: "She seems to have caught more flak from the literary critics for supporting democracy than Ezra Pound did for championing fascism."

In 1923, she married Eugene Jan Boissevain, then the 43-year-old widower of labor lawyer and war correspondant Inez Milholland. Boissevain greatly supported her career, taking primary care for domestic responsibilities. They lived in Austerlitz, New York, at a farmhouse they called "Steepletop." Pleasantly removed from the hustle and bustle of New York City, Millay wrote a number of her best poems at Steepletop, most notably her sequence of sonnets, which were apparently inspired by a brief affair Millay had with a young poet by the name of George Dillon. Millay's marriage survived the affair, and by all accounts she and Boissevain lived contentedly together to the end of their days.

Boissevain died in 1949 of lung cancer. Millay was found dead at the bottom of the stairs in her house on October 19, 1950, having apparently broken her neck in a fall.[1]