Clark University is a private research university and liberal arts college in Worcester, Massachusetts. Founded in 1887 by the industrialist Jonas Clark, it is the oldest institution founded as an all-graduate university due to the efforts of Clark's first president, G. Stanley Hall. As president, Hall was influential not only in making Clark prestigious in terms of research and scholarly development, but also in the development of psychology in America. In particular, he was instrumental in bringing psychoanalysis to the United States through his invitation to Sigmund Freud to give a series of lectures at Clark's twentieth anniversary celebration in 1909. Freud spoke only at Clark University during his single trip to the United States. Hall's invitation and creation of such a prestigious venue and audience provided the foundation for Freud's views to be accepted by scholars in the United States.

Hall's ideas were, however, contrary to Jonas Clark's vision for the institution. Later, Clark succeeded in having an undergraduate college established; the college and university merged in 1920. Research is still funded at Clark University despite an increasing emphasis on undergraduate education, and it remains a well-respected academic institution while at the same time contributing significantly to the local community.

Clark University describes its mission as "to educate undergraduate and graduate students to be imaginative and contributing citizens of the world, and to advance the frontiers of knowledge and understanding through rigorous scholarship and creative effort."[1] Clark University strives to achieve this goal by incorporating a strong traditional liberal arts educational experience along with fostering a sense of intellectual curiosity in each of its students. Even though its main focus is now on undergraduate education, Clark still maintains respected graduate level programs and research programs, which, in conjunction with its relatively small size, gives its undergraduate students exposure to a wide range of academic experiences, and fosters a close bond between undergraduate, graduate, and facility members which increases the intellectual experience of all involved.

Clark University was ranked 80th in the U.S. by the 2008 U.S. News and World Report "2009 Best Colleges" report, and has consistently been within the top 100-150 private liberal arts schools in the U.S.[2] Clark has developed a reputation as a free-thinking institution. Clark has been noted especially for its geography and psychology departments, with the latter having a distinctive, if increasingly unfashionable "humanistic" orientation. 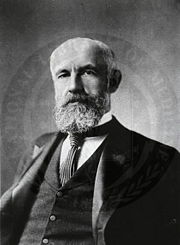 Clark University was first established in 1887 by successful business man and industrialist Jonas Clark, who established the school after developing an interest in higher education. Moving with his family to Worcester, Massachusetts in 1878, Clark had soon begun to purchase land in the southern part of the town, although he did not disclose his plan to build a university there until 1886. Petitioning the Legislature to establish the institution, Clark was using the famous research university, Johns Hopkins as his model and that he expected a better school than Harvard to result. His plan was to establish a university of three equally important parts:

A department of original research and graduate study, a library, and a low-cost, no frills college where well-prepared boys from the Worcester region could get a practical education.[3]

Clark's plan was to begin by building up the library and undergraduate division; by the time the first students graduated four years later they would have had time to develop graduate and professional programs and build the additional facilities. To further this goal, Clark made a substantial donation toward the costs of construction of buildings and establishing the library, as well as providing an endowment for operating costs. However, the man chosen to be first president of Clark, G. Stanley Hall, had a different vision. He persuaded the trustees to begin with the library and the graduate school, arguing that when the doctoral students graduated they would become the professors for the undergraduate division that would open later.[3] Thus, when it opened in 1889, the university only offered doctoral programs, the first institution in the United States to do so.[4]

Jonas Clark soon recognized that Hall's plans were very different from his expectations. Although unable to change the course of events in his lifetime, Clark ensured that his vision would be fulfilled after his death by making the institution's inheritance of his estate conditional upon the establishment of an independent undergraduate college.[3] The trustees accepted the condition and established a separate college. In 1902, Clark started to offer undergraduate level degrees and programs through this independent college. In 1920, upon Hall's retirement as president, the undergraduate college merged with the university.

During his presidency, Hall was a major influence on the development of American psychology, as the founder of the American Psychological Association, and his work also made Clark University central for the psychological movement. Hall played a particularly important role by inviting Sigmund Freud to deliver what later became known as his famous Clark Lectures at a conference organized in celebration of Clark's twentieth anniversary.[5] Freud was extremely happy to visit America and be able to present his work before the gathering of eminent scholars whom Hall had also invited:

As I stepped on to the platform at Worcester to deliver my Five Lectures on Psycho-Analysis it seems like the realization of some incredible day-dream: psycho-analysis was no longer a product of a delusion, it had become a valuable part of reality.[6]

As a result of this successful visit, psychoanalysis was introduced into the United States much earlier than it would otherwise have been.[7] The American Psychoanalytic Society was founded in Baltimore just two years later and the movement quickly grew to become one of the most influential movements in psychology in the early decades of the twentieth century.

During most of the twentieth century, Clark remained a small, yet prestigious school. While the school did shift towards focusing in undergraduate education, it never left behind its roots in research and advanced study, particularly in specialized or traditionally under represented fields. Clark was one of the first colleges to develop a Geography department, one which has become renowned for its innovation and rigor. The school also maintained strong relations with the local industrial community, and benefited from such ties, both in endowments and from the growth of a local community of several other colleges that gave its students an ideal place to come and study. In 1985, the university engaged in a partnership with community groups and business organizations to revitalize Clark neighborhoods. Its efforts in the University Park Partnership program include refurbishing dilapidated or abandoned homes, reselling them to area residents, and subsidizing mortgages for new home buyers.[8]

Clark has several different facilities for the arts, including the Traina Center for the Arts which houses galleries, research facilities, and lecture centers, the Little Center, Clark's theater building that includes performances spaces, and workshops for costume, set and prop design and the Schiltkamp Gallery which exhibits works of many different artist mediums.

The University has several different athletic related facilities, both for organized sports and for recreational use, such as the Kneller Athletic Center and Bickman Fitness Center.

Clark University offers 31 undergraduate majors, most of which fall into the traditional paradigm of liberal arts. Some of the unique undergraduate programs offered include Urban Education, Geographic Information Sciences (GIS), Holocaust and Genocide Studies, and International Development and Social Change. Clark's graduate program offers 7 Ph.D. and 12 graduate level programs, with programs in psychology, history, and business being some of the most popular.

Under Clark's "Fifth-Year Free" program, undergraduates who maintain a B+ average are eligible for tuition-free enrollment in its one-year graduate programs, meaning that they can achieve a Master of Arts degree for the price of a bachelor's degree. Students apply to master's degree programs in their junior year, begin meeting requirements in their senior year, and typically complete those requirements in the fifth year. Bachelor's degrees are granted en route to the master's degree.

Clark also offers an extensive Study Abroad program, a 3/2 engineering program which allows students to study for three years at Clark and then a final two years of study at an engineering school, which leads to both an undergraduate and graduate degree. Clark participates in the Colleges of Worcester Consortium which allows all undergraduate students except freshmen from registering for one class per term at one of the other colleges in the consortium.

In 1997, Clark opened a secondary public school, the University Park Campus School (UPCS), that is also a professional development school for Clark’s teacher education program. Because of its long hours and demanding curricula, UPCS has been lauded as a model for collaboration between a university and an urban district. Students are able to attend Clark University free of charge upon graduation, provided they meet certain residency and admissions requirements.

Clark University does not divide itself into different colleges like some of the larger universities; rather, academics are broken down into specialized departments that oversee one or two different programs of study. There is a distinction made between undergraduate and graduate schools. 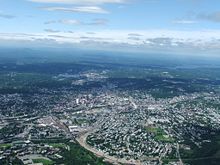 Worcester Massachusetts and the surrounding area

The surrounding area of Worcester also offers students many opportunities, offering an urban environment without being a major metropolitan area. The college is only fifty miles from the city of Boston. Historical Worcester has many colleges located near the city limits, helping to create a college town environment where Clark students can mingle with other college students, explore the museums and history of the area.[8]

Clark University's student population has become increasingly more diverse and even international, attracting students with its unique programs. Clark offers twenty-four different residential buildings, requiring underclassmen to live on campus for a specific amount of time but also does its best to accommodate all students.[9] Clark offers clubs that range from Arts and Crafts to Nature and regional excursions. The several arts facilities and galleries on campus allow students the opportunity to participate in and experience many different artist activities. Clark is a Division 3 athletic conference, offering both men's and women's sports, such as Baseball, Softball, Lacrosse, Crew, and Cross Country Track. The school also offers intramural sports for such activities as Soccer. Students are also able to take advantage of the athletic and recreational facilities, including a gym, pool, and recreational classes.[8]

Every fall the university has what is called Spree Day, where students present their work, whether it be artistic or intellectual. Students' works are exhibited in Higgins University Center for a day, along with the students who created them. The entire college, along with the Worcester community, is invited to attend, where they can view the works and interact with the students whose works are presented.[8] The tradition gives the students both an opportunity to show off their achievements as well as market themselves and make connections.

Following are some of those affiliated with Clark University, alumni and renowned faculty who have taught at Clark: