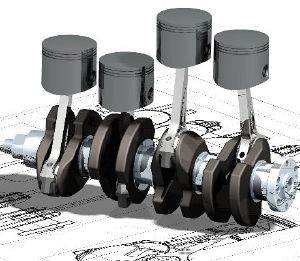 An oblique view of a four-cylinder inline crankshaft with pistons.

Computer-aided design (CAD) is the use of computer technology to aid in the design and drafting (drafting involves the production of technical or engineering drawings and is the industrial arts sub-discipline that underlies technical endeavors) of a practical product or artistic creation. It is both a visual and symbol-based method of communication, and is a useful tool for engineers, architects, artists, and draftsmen.

Current CAD software packages range from two-dimensional (2D) vector-based drafting systems to three-dimensional (3D) solid and surface modelers. Modern CAD packages frequently allow rotations in three dimensions, so that a designed object can be viewed from any desired angle, even from the inside looking out. CAD has become an especially important technology within the scope of computer-aided technologies, with benefits such as lower product development costs and a greatly shortened design cycle. CAD enables designers to lay out and develop work on screen, print it out and save it for future editing, saving time on their drawings. Some CAD software is capable of dynamic, mathematical modeling, in which case it may be marketed as CADD, for "computer-aided design and drafting." An example of a CAD engineering drawing. 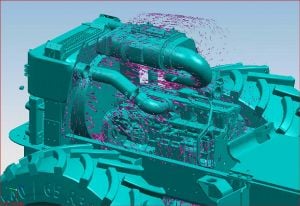 Simulation of airflow over an engine

CAD is employed in the design of tools and machinery used in the manufacture of components, and in the drafting and design of all types of buildings, from small residential types (houses) to the largest commercial and industrial structures (hospitals and factories).

CAD is mainly used for detailed engineering of 3D models and/or 2D drawings of physical components, but it is also used throughout the engineering process from conceptual design and layout of products, through strength and dynamic analysis of assemblies to definition of manufacturing methods of components.

Some features of modern CAD systems include:

CAD is one part of the whole Digital Product Development (DPD) activity within the Product Lifecycle Management (PLM) process. As such, it is used together with other tools, which may be integrated modules or stand-alone products. Examples are: 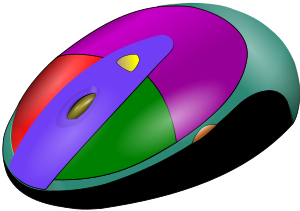 A CAD model of a mouse.

Originally software for CAD systems was developed with computer language such as Fortran, but with the advancement of object-oriented programming methods, this has radically changed. Typical modern parametric feature based modeler and freeform surface systems are built around a number of key C programming language modules with their own application programming interfaces (APIs). A CAD system can be seen as built up from the interaction of a graphical user interface (GUI) with NURBS geometry and/or boundary representation (B-rep) data via a geometric modeling kernel. A geometry constraint engine may also be employed to manage the associative relationships between geometry, such as wireframe geometry in a sketch or components in an assembly.

Unexpected capabilities of these associative relationships have led to a new form of prototyping called digital prototyping. In contrast to physical prototypes, which entail manufacturing time and material costs, digital prototypes allow for design verification and testing on screen, speeding up time-to-market and decreasing costs. As technology evolves in this way, CAD has moved beyond a documentation tool (representing designs in graphical format) into a more robust designing tool that assists in the design process.

Today most CAD computers are Windows based PCs. Some CAD systems also run on one of the Unix operating systems and with Linux. Some CAD systems such as QCad or NX provide multiplatform support including Windows, Linux, UNIX, and Mac OS X.

Generally, no special basic memory is required with the exception of a high end OpenGL based Graphics card. However for complex product design, machines with high speed (and possibly multiple) CPUs and large amounts of RAM are recommended. CAD was an application that benefited from the installation of a numeric coprocessor especially in early personal computers. The human-machine interface is generally via a computer mouse but can also be via a pen and digitizing graphics tablet. Manipulation of the view of the model on the screen is also sometimes done with the use of a spacemouse/SpaceBall. Some systems also support stereoscopic glasses for viewing the 3D model.

CAD is an important tool used in various ways by engineers and designers. Its use depends on the profession of the user and the type of software in question. Each of the different types of CAD systems requires the operator to think differently about how he or she will use them and he or she must design their virtual components in a different manner for each.

There are many producers of the lower-end 2D systems, including a number of free and open source programs. These provide an approach to the drawing process without all the fuss over scale and placement on the drawing sheet that accompanied hand drafting, since these can be adjusted as required during the creation of the final draft.

3D wireframe is basically an extension of 2D drafting. Each line has to be manually inserted into the drawing. The final product has no mass properties associated with it and cannot have features directly added to it, such as holes. The operator approaches these in a similar fashion to the 2D systems, although many 3D systems allow using the wireframe model to make the final engineering drawing views.

3D "dumb" solids (programs incorporating this technology include AutoCAD and Cadkey 19) are created in a way analogous to manipulations of real word objects. Basic three-dimensional geometric forms (prisms, cylinders, spheres, and so on) have solid volumes added or subtracted from them, as if assembling or cutting real-world objects. Two-dimensional projected views can easily be generated from the models. Basic 3D solids don't usually include tools to easily allow motion of components, set limits to their motion, or identify interference between components.

3D parametric solid modeling (programs incorporating this technology include NX, the combination of UniGraphics and IDeas, Autodesk Inventor, Alibre Design, TopSolid, T-FLEX CAD, SolidWorks, and Solid Edge) require the operator to use what is referred to as "design intent." The objects and features created are adjustable. Any future modifications will be simple, difficult, or nearly impossible, depending on how the original part was created. One must think of this as being a "perfect world" representation of the component. If a feature was intended to be located from the center of the part, the operator needs to locate it from the center of the model, not, perhaps, from a more convenient edge or an arbitrary point, as he could when using "dumb" solids. Parametric solids require the operator to consider the consequences of his actions carefully. What may be simplest today could be worst case tomorrow.

Some software packages provide the ability to edit parametric and non-parametric geometry without the need to understand or undo the design intent history of the geometry by use of direct modeling functionality. This ability may also include the additional ability to infer the correct relationships between selected geometry (for example, tangency, concentricity) which makes the editing process less time- and labor-intensive while freeing the engineer from the burden of understanding the model’s design intent history. These kinds of non-history-based systems are called Explicit Modellers. The first Explicit Modeling system was introduced at the end of the 1980s, by Hewlett-Packard and was named SolidDesigner. It was followed by many later versions.

Draft views can be generated easily from the models. Assemblies usually incorporate tools to represent the motions of components, set their limits, and identify interference. The tool kits available for these systems are ever increasing; including 3D piping and injection mold designing packages.

Top end systems offer the capabilities to incorporate more organic, aesthetics and ergonomic features into designs (Catia, GenerativeComponents). Freeform surface modelling is often combined with solids to allow the designer to create products that fit the human form and visual requirements as well as they interface with the machine.

Starting in the late 1980s, the development of readily affordable CAD programs that could be run on personal computers began a trend of massive downsizing in drafting departments in many small to mid-size companies. As a general rule, one CAD operator could readily replace at least three to five drafters using traditional methods. Additionally, many engineers began to do their own drafting work, further eliminating the need for traditional drafting departments. This trend mirrored that of the elimination of many office jobs traditionally performed by a secretary as word processors, spreadsheets, databases, and so forth became standard software packages that "everyone" was expected to learn.

Another consequence had been that since the latest advances were often quite expensive, small and even mid-size firms often could not compete against large firms who could use their computational edge for competitive purposes. Today, however, hardware and software costs have come down. Even high-end packages work on less expensive platforms and some even support multiple platforms. The costs associated with CAD implementation now are more heavily weighted to the costs of training in the use of these high level tools, the cost of integrating a CAD/CAM/CAE PLM using enterprise across multi-CAD and multi-platform environments and the costs of modifying design workflows to exploit the full advantage of CAD tools.

CAD vendors have been effective in providing tools to lower these training costs. These tools have operated in three CAD arenas: