An assortment of polygons.

In geometry, a polygon is a plane figure that is bounded by a closed path or circuit, composed of a finite sequence of straight line segments (that is, by a closed polygonal chain). These line segments are called its edges or sides, and the points where two edges meet are the polygon's vertices or corners. The interior of the polygon is called its body. A polygon is a 2-dimensional example of the more general "polytope" in any number of dimensions.

In the computer graphics (image generation) field, the term polygon has taken on a slightly altered meaning, more related to the way the shape is stored and manipulated within the computer.

Polygons are primarily classified by the number of sides, see naming polygons below.

Polygons may be characterized by their degree of convexity:

We will assume Euclidean geometry throughout.

The reasoning also applies if some interior angles are more than 180°: going clockwise around, it means that one sometime turns left instead of right, which is counted as turning a negative amount. (Thus we consider something like the winding number of the orientation of the sides, where at every vertex the contribution is between -½ and ½ winding.)

Moving around an n-gon in general, the sum of the exterior angles (the total amount one "turns" at the vertices) can be any integer times 360°, e.g., 720° For a pentagram and 0° For an angular "eight." See also orbit (dynamics).

Nomenclature of a 2D polygon.

The area of a polygon is the measurement of the 2-dimensional region enclosed by the polygon. For a non-self-intersecting (simple) polygon with

vertices, the area and centroid are given by[1]:

To close the polygon, the first and last vertices are the same, ie

The formula was described by Meister in 1769 and by Gauss in 1795. It can be verified by dividing the polygon into triangles, but it can also be seen as a special case of Green's theorem.

The area A of a simple polygon can also be computed if the lengths of the sides, a1,a2, …, an and the exterior angles,

are known. The formula is

If the polygon can be drawn on an equally-spaced grid such that all its vertices are grid points, Pick's theorem gives a simple formula for the polygon's area based on the numbers of interior and boundary grid points.

If any two simple polygons of equal area are given, then the first can be cut into polygonal pieces which can be reassembled to form the second polygon. This is the Bolyai-Gerwien theorem.

For a regular polygon with n sides of length s, the area is given by:

The area of a self-intersecting polygon can be defined in two different ways, each of which gives a different answer:

An n-gon has 2n degrees of freedom, including 2 for position and 1 for rotational orientation, and 1 for over-all size, so 2n-4 for shape. In the case of a line of symmetry the latter reduces to n-2.

In a broad sense, a polygon is an unbounded sequence or circuit of alternating segments (sides) and angles (corners). The modern mathematical understanding is to describe this structural sequence in terms of an 'abstract' polygon which is a partially-ordered set (poset) of elements. The interior (body) of the polygon is another element, and (for technical reasons) so is the null polytope or nullitope.

Generally, a geometric polygon is a 'realization' of this abstract polygon; this involves some 'mapping' of elements from the abstract to the geometric. Such a polygon does not have to lie in a plane, or have straight sides, or enclose an area, and individual elements can overlap or even coincide. For example a spherical polygon is drawn on the surface of a sphere, and its sides are arcs of great circles. As another example, most polygons are unbounded because they close back on themselves, while apeirogons (infinite polygons) are unbounded because they go on for ever so you can never reach any bounding end point. So when we talk about "polygons" we must be careful to explain what kind we are talking about.

A digon is a closed polygon having two sides and two corners. On the sphere, we can mark two opposing points (like the North and South poles) and join them by half a great circle. Add another arc of a different great circle and you have a digon. Tile the sphere with digons and you have a polyhedron called a hosohedron. Take just one great circle instead, run it all the way round, and add just one "corner" point, and you have a monogon or henagon.

Other realizations of these polygons are possible on other surfaces - but in the Euclidean (flat) plane, their bodies cannot be sensibly realized and we think of them as degenerate.

The idea of a polygon has been generalized in various ways. Here is a short list of some degenerate cases (or special cases, depending on your point of view):

The word 'polygon' comes from Late Latin polygōnum (a noun), from Greek polygōnon/polugōnon πολύγωνον, noun use of neuter of polygōnos/polugōnos πολύγωνος (the masculine adjective), meaning "many-angled." Individual polygons are named (and sometimes classified) according to the number of sides, combining a Greek-derived numerical prefix with the suffix -gon, e.g., pentagon, dodecagon. The triangle, quadrilateral, and nonagon are exceptions. For large numbers, mathematicians usually write the numeral itself, e.g., 17-gon. A variable can even be used, usually n-gon. This is useful if the number of sides is used in a formula.

Some special polygons also have their own names; for example, the regular star pentagon is also known as the pentagram.

To construct the name of a polygon with more than 20 and less than 100 edges, combine the prefixes as follows

The 'kai' is not always used. Opinions differ on exactly when it should, or need not, be used (see also examples above).

That is, a 42-sided figure would be named as follows:

and a 50-sided figure

But beyond enneagons and decagons, professional mathematicians prefer the aforementioned numeral notation (for example, MathWorld has articles on 17-gons and 257-gons). 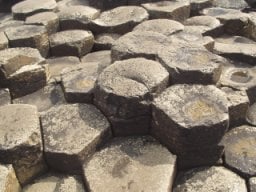 The Giant's Causeway, in Ireland

Numerous regular polygons may be seen in nature. In the world of minerals, crystals often have faces which are triangular, square or hexagonal. Quasicrystals can even have regular pentagons as faces. Another fascinating example of regular polygons occurs when the cooling of lava forms areas of tightly packed hexagonal columns of basalt, which may be seen at the Giant's Causeway in Ireland, or at the Devil's Postpile in California. 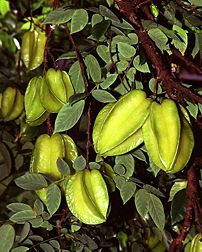 The most famous hexagons in nature are found in the animal kingdom. The wax honeycomb made by bees is an array of hexagons used to store honey and pollen, and as a secure place for the larvae to grow. There also exist animals who themselves take the approximate form of regular polygons, or at least have the same symmetry. For example, starfish display the symmetry of a pentagon or, less frequently, the heptagon or other polygons. Other echinoderms, such as sea urchins, sometimes display similar symmetries. Though echinoderms do not exhibit exact radial symmetry, jellyfish and comb jellies do, usually fourfold or eightfold.

Radial symmetry (and other symmetry) is also widely observed in the plant kingdom, particularly amongst flowers, and (to a lesser extent) seeds and fruit, the most common form of such symmetry being pentagonal. A particularly striking example is the Starfruit, a slightly tangy fruit popular in Southeast Asia, whose cross-section is shaped like a pentagonal star.

Moving off the earth into space, early mathematicians doing calculations using Newton's law of gravitation discovered that if two bodies (such as the sun and the earth) are orbiting one another, there exist certain points in space, called Lagrangian points, where a smaller body (such as an asteroid or a space station) will remain in a stable orbit. The sun-earth system has five Lagrangian points. The two most stable are exactly 60 degrees ahead and behind the earth in its orbit; that is, joining the centre of the sun and the earth and one of these stable Lagrangian points forms an equilateral triangle. Astronomers have already found asteroids at these points. It is still debated whether it is practical to keep a space station at the Lagrangian point — although it would never need course corrections, it would have to frequently dodge the asteroids that are already present there. There are already satellites and space observatories at the less stable Lagrangian points.

Things to do with polygons

A polygon in a computer graphics (image generation) system is a two-dimensional shape that is modelled and stored within its database. A polygon can be colored, shaded and textured, and its position in the database is defined by the co-ordinates of its vertices (corners).

Naming conventions differ from those of mathematicians:

Use of Polygons in Real-time imagery. The imaging system calls up the structure of polygons needed for the scene to be created from the database. This is transferred to active memory and finally, to the display system (screen, TV monitors, etc.) so that the scene can be viewed. During this process, the imaging system renders polygons in correct perspective ready for transmission of the processed data to the display system. Although polygons are two dimensional, through the system computer they are placed in a visual scene in the correct three-dimensional orientation so that as the viewing point moves through the scene, it is perceived in 3D.

Morphing. To avoid artificial effects at polygon boundaries where the planes of contiguous polygons are at different angle, so called 'Morphing Algorithms' are used. These blend, soften or smooth the polygon edges so that the scene looks less artificial and more like the real world.

Polygon Count. Since a polygon can have many sides and need many points to define it, in order to compare one imaging system with another, "polygon count" is generally taken as a triangle. A triangle is processed as three points in the x, y, and z axes, needing nine geometrical descriptors. In addition, coding is applied to each polygon for color, brightness, shading, texture, NVG (intensifier or night vision), Infra-Red characteristics and so on. When analyzing the characteristics of a particular imaging system, the exact definition of polygon count should be obtained as it applies to that system.

Meshed Polygons. The number of meshed polygons (`meshed' is like a fish net) can be up to twice that of free-standing unmeshed polygons, particularly if the polygons are contiguous. If a square mesh has n + 1 points (vertices) per side, there are n squared squares in the mesh, or 2n squared triangles since there are two triangles in a square. There are (n+1) 2/2n2 vertices per triangle. Where n is large, this approaches one half. Or, each vertex inside the square mesh connects four edges (lines).

Vertex Count. Because of effects such as the above, a count of Vertices may be more reliable than Polygon count as an indicator of the capability of an imaging system.