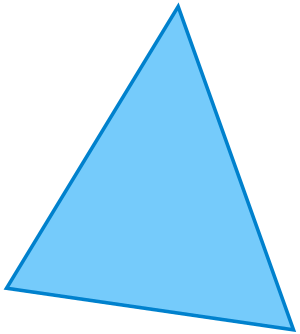 A triangle is one of the basic shapes of geometry: a polygon with three corners (or vertices) and three sides (or edges) that are straight line segments.

In Euclidean geometry any three non-collinear points determine a triangle and a unique plane, that is, two-dimensional Cartesian space.

Triangles can be classified according to the relative lengths of their sides:

Triangles can also be classified according to the their internal angles, described below using degrees of arc.

Elementary facts about triangles were presented by Euclid in books 1-4 of his Elements around 300 B.C.E. A triangle is a polygon and a 2-simplex (see polytope). All triangles are two-dimensional.

The sum of the lengths of any two sides of a triangle always exceeds the length of the third side. That is the triangle inequality.

Two triangles are said to be similar if and only if the angles of one are equal to the corresponding angles of the other. In this case, the lengths of their corresponding sides are proportional. This occurs for example when two triangles share an angle and the sides opposite to that angle are parallel.

A few basic postulates and theorems about similar triangles:

For two triangles to be congruent, each of their corresponding angles and sides must be congruent (6 total). A few basic postulates and theorems about congruent triangles:

Using right triangles and the concept of similarity, the trigonometric functions sine and cosine can be defined. These are functions of an angle which are investigated in trigonometry.

In Euclidean geometry, the sum of the internal angles of a triangle is equal to 180°. This allows determination of the third angle of any triangle as soon as two angles are known. 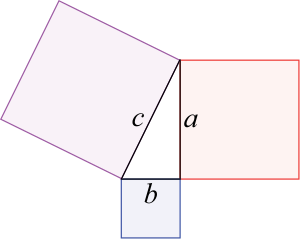 The converse is true: if the lengths of the sides of a triangle satisfy the above equation, then the triangle is a right triangle.

Some other facts about right triangles:

For all triangles, angles and sides are related by the law of cosines and law of sines.

Points, lines and circles associated with a triangle

There are hundreds of different constructions that find a special point inside a triangle, satisfying some unique property: see the references section for a catalogue of them. Often they are constructed by finding three lines associated in a symmetrical way with the three sides (or vertices) and then proving that the three lines meet in a single point: an important tool for proving the existence of these is Ceva's theorem, which gives a criterion for determining when three such lines are concurrent. Similarly, lines associated with a triangle are often constructed by proving that three symmetrically constructed points are collinear: here Menelaus' theorem gives a useful general criterion. In this section just a few of the most commonly-encountered constructions are explained. 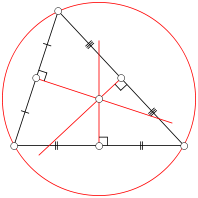 The circumcenter is the center of a circle passing through the three vertices of the triangle.

The intersection of the altitudes is the orthocenter. 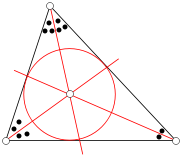 The intersection of the angle bisectors finds the center of the incircle.

An angle bisector of a triangle is a straight line through a vertex which cuts the corresponding angle in half. The three angle bisectors intersect in a single point, the incenter, the center of the triangle's incircle. The incircle is the circle which lies inside the triangle and touches all three sides. There are three other important circles, the excircles; they lie outside the triangle and touch one side as well as the extensions of the other two. The centers of the in- and excircles form an orthocentric system.

The barycenter is the center of gravity.

Nine-point circle demonstrates a symmetry where six points lie on the edge of the triangle.

The midpoints of the three sides and the feet of the three altitudes all lie on a single circle, the triangle's nine-point circle. The remaining three points for which it is named are the midpoints of the portion of altitude between the vertices and the orthocenter. The radius of the nine-point circle is half that of the circumcircle. It touches the incircle (at the Feuerbach point) and the three excircles. 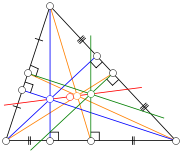 Euler's line is a straight line through the centroid (orange), orthocenter (blue), circumcenter (green) and center of the nine-point circle (red).

The center of the incircle is not in general located on Euler's line.

If one reflects a median at the angle bisector that passes through the same vertex, one obtains a symmedian. The three symmedians intersect in a single point, the symmedian point of the triangle.

Computing the area of a triangle

Calculating the area of a triangle is an elementary problem encountered often in many different situations. The most common and simplest formula is

is the length of the base of the triangle, and

is the height or altitude of the triangle. Other approaches exist, depending on what is known about the triangle. What follows is a selection of frequently used formulae for the area of a triangle.[4]

The area of triangle ABC can also be expressed in term of dot products as follows:

The altitude of a triangle can be found through an application of trigonometry. Using the labelling as in the image on the left, the altitude is h = a sin γ. Substituting this in the formula S = ½bh derived above, the area of the triangle can be expressed as:

If vertex A is located at the origin (0, 0) of a Cartesian coordinate system and the coordinates of the other two vertices are given by B = (xB, yB) and C = (xC, yC), then the area S can be computed as ½ times the absolute value of the determinant

For three general vertices, the equation is:

An equivalent way of writing Heron's formula is

Retrieved from https://www.newworldencyclopedia.org/p/index.php?title=Triangle&oldid=1034188
Categories:
Hidden category:
This page was last edited on 26 March 2020, at 19:08.
Content is available under Creative Commons Attribution/Share-Alike License; additional terms may apply. See Terms of Use for details.