Starfish, or sea stars (a less confusing designation, since they are only very distantly related to fish), are marine invertebrates belonging to the kingdom animalia, phylum Echinodermata, and class Asteroidea, of which there are over 1800 known species. The names sea star and starfish also are (incorrectly) used for the closely related brittle stars, which make up the class Ophiuroidea.

Characteristics of sea stars include that they exhibit a superficially radial symmetry, since they typically have five or more "arms" which radiate from an indistinct disk (pentaradial symmetry), and tend to be covered in spines. Like other echinoderms, starfish possess an endoskeleton, but do not rely on it for support and locomotion, instead using a hydraulic water vascular system that functions via many projections called tube feet, located on the ventral surface of the starfish's arms.

Starfish are an essential part of marine food chains, being eaten as larvae, and becoming voracious predators upon reaching adulthood, with their diet including mollusks and other marine organisms. They even are able to evert their stomach in order to pull apart and digest their shelled prey. For humans, they are a source of aesthetic joy and their remarkable characteristics—movement based on a hydraulics system, ability to regenerate lost limbs and evert their stomach—add to the wonder of nature. Some starfish also are captured, dried out, and turned into popular souvenirs or decorations.

While starfish can reproduce sexually, if an arm of the starfish is severed from the body and it contains a portion of the central nerve ring, then another starfish can regrow from the severed portion. Lack of knowledge of this capacity increased the role of starfish as pests to commercial clam and oyster beds when fisherman, in an effort to get rid of these predators, would cut them up and throw them back into the ocean.

There are about 1,800 known living species of starfish, and they occur in all of the Earth's oceans (though the greatest variety of starfish is found in the tropical Indo-Pacific). Habitats range from tropical coral reefs to kelp forests to the deep-sea floor, although none live within the water column; all species of starfish found are living as benthos (or on the ocean floor).

Because echinoderms need to maintain a delicate internal balance in their body, no starfish are found in freshwater environments.

Starfish are composed of a central disc from which arms (usually five, but the number can vary) sprout in pentaradial symmetry. The mouth is located underneath the starfish on the oral or ventral surface, while the anus is located on the top of the animal. The spiny upper surface covering the species is called the aboral (meaning the side opposite to the mouth) or dorsal surface. On this surface there is a structure called the madreporite (or the sieve plate), a small white spot located slightly off-center on the central disc, which acts as a water filter and supplies the starfish's water vascular system with water to move. 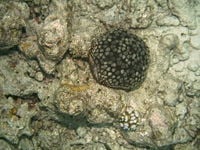 Also on the aboral surface, surrounding the spines, are small white objects known as pedicellarieae, which are like pairs of claws or jaws that serve to prevent encrusting organisms from colonizing the starfish.

The radial canals (a part of the internal anatomy), which extend from the center of the starfish out towards the tips of the arms, have hollow, muscular tube feet branching from them. Each tube foot has a bulb-like ampulla, as well as a suckered podium (or foot part), which are a part of the water vascular system. Starfish also have a simple photoreceptor eye spot at the end of each arm that is able to "see" differences of light and dark, enabling the starfish to detect movement. Additional parts, like cribriform organs, that are present exclusively in Porcellanasteridae, are used to generate current in the burrows made by these starfish.

While starfish generally adhere to this basic body plan, there is great variety in the shape (ranging from nearly pentagonal like the Indo-pacific cushion star, Culcita novaeguineae, to gracile stars like those of the Zoroaster genus), the color, and the morphology between each species. Some species have patterns that serve as camouflage or warning coloration, which include mosaic-like tiles formed by ossicles, stripes, interconnecting net between spines, and pustules with bright colors, mottles, or spots. 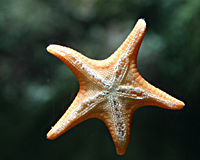 The tube feet can be seen on this starfish. 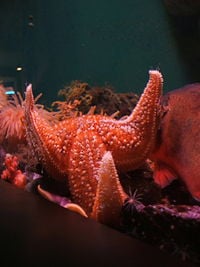 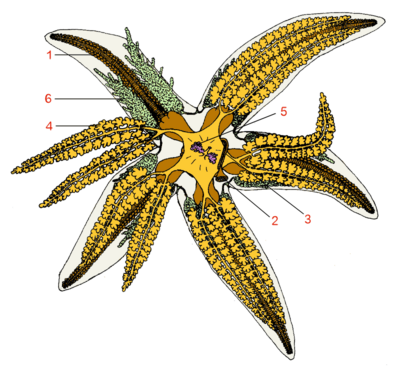 Echinoderms have a simple circulatory system (also called a hemal system) that is linked with their excretory system. In the starfish, the hemal system is used to distribute nutrients, with hemal channels forming rings around the mouth (the oral hemal ring), closer to the top of the starfish, and around the digestive system (the gastric hemal ring). The axial sinus, a portion of the body cavity, connects these three rings. Each ray of the starfish also has hemal channels running next to the gonads.

Starfish digestion is carried out in two separate stomachs, the cardiac stomach and the pyloric stomach. The cardiac stomach, which is a sack-like stomach located at the center of the body, may be everted, or pushed out of the organism's body, and used to engulf and digest food. Some species take advantage of the great endurance of their water vascular systems to force open the shells of bivalve mollusks, such as clams and mussels, and inject their stomachs into the shells. Once the stomach is inserted inside the shell, it digests the mollusk in place. The cardiac stomach is then brought back inside the body, and the partially digested food is moved to the pyloric stomach. Further digestion occurs in the intestine and waste is excreted through the anus on the aboral side of the body.

Because of this ability to digest food outside of its body, the sea star is able to hunt prey that are much larger than its mouth would otherwise allow, including arthropods, and even small fish, in addition to mollusks.

Some echinoderms have been shown to live for several weeks without food under artificial conditions—it is believed that they may receive some nutrients from organic material dissolved in seawater.

Sea stars and other echinoderms have endoskeletons (internal skeletons) that are composed of calcium carbonate plates called ossicles, which is one of the reasons some scientists are led to believe that echinoderms are very closely related to chordates (animals with a hollow nerve chord that usually have vertebrae). 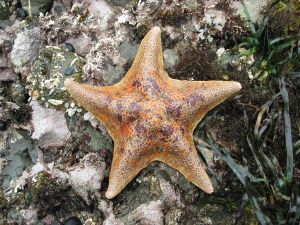 Starfish have a simple nervous system that lacks a true brain, and consists partially of a nerve plexus (a network of interlacing nerves), which lies within as well as below the skin. The esophagus is also surrounded by a number of nerve rings, which send radial nerves that are often parallel with the branches of the water vascular system. The ring nerves and radial nerves coordinate the starfish's balance and directional systems. 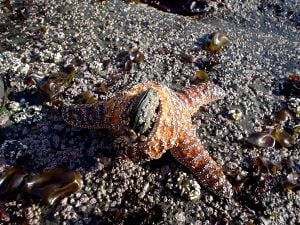 Most species of starfish are generalist predators, some eating bivalves like mussels, clams, and oysters, or any animal too slow to evade the attack (such as dying fish). Some species are detritivores, eating decomposed animal and plant material, or organic films attached to substrate. Others may consume coral polyps (the best-known example for this is the infamous Acanthaster planci, or crown-of-thorns starfish, which also secretes toxins from its spines), sponges, or even suspended particles and plankton (starfish from the Order Brisingida).

The process of feeding or capture may be aided by special parts, such as specialized tube feet (used by the Pisaster brevispinus or short-spined pisaster) capable of extending deep into the soft substrata in order to haul out prey (usually clams) from within (Nybakken 1997). 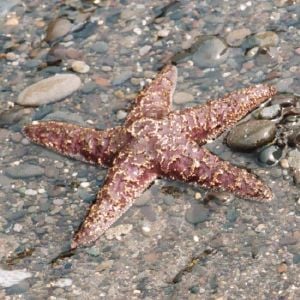 Starfish are capable of both sexual and asexual reproduction, with individual starfish being male or female. Fertilization takes place externally, with both male and female releasing their gametes into the environment. Resulting fertilized embryos form part of the zooplankton.

Starfish are developmentally (embryologically) known as deuterostomes. Their embryo initially develops bilateral symmetry, leading some scientists to believe that starfish share a common ancestor with chordates. Later development takes a very different path as the developing starfish settles out of the zooplankton and develops its characteristic radial symmetry. Some species reproduce cooperatively, using environmental signals to coordinate the timing of gamete release, while in other species one to one pairing is more normal.

Some species of starfish are also able to reproduce asexually by fragmentation, often with part of an arm becoming detached and eventually developing into an independent individual starfish. This has led to some notoriety. Starfish can be pests to fishermen who make their living on the capture of clams and other mollusks at sea as starfish prey on these. The fishermen presumably would kill the starfish by chopping them up and disposing of them at sea, ultimately leading to their increased numbers until the issue was better understood. A starfish arm can only regenerate into a whole new organism if some of the central nerve ring of the starfish is part of the chopped off arm. 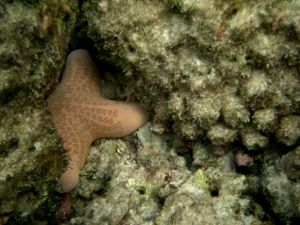 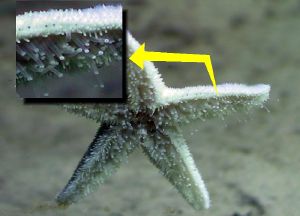 The underside of a sea star. The inset shows a magnified view of the tube feet.

Starfish, like other echinoderms, move using a water vascular system. Water comes into the system via the madreporite. It is then circulated from the stone canal to the ring canal and into the radial canals. The radial canals carry water to the ampullae and provide suction to the tube feet. The tube feet latch on to surfaces and move in a wave, with one body section attaching to the surfaces as another releases.

Much of the adhesion of starfish to surface is chemical, with the tube foot secreting substances that either bond with surfaces or break down the bonds with surfaces, allowing the tube foot to move. This is so that extra energy is not expended by the starfish in order to stay attached by exerting its muscles. As a result of all this, most starfish cannot move quickly. However, some burrowing species like starfish from genus Astropecten and Luidia are quite capable of rapid, creeping motion—it "glides" across the ocean floor. This motion results from their pointed tube feet adapted specially for excavating local area of sand. 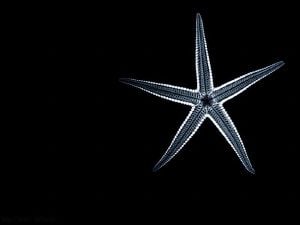 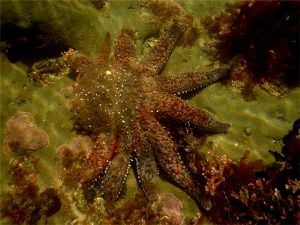 Some species of starfish have the ability to regenerate lost arms and can regrow an entire new arm in time. Most species must have the central part of the body intact to be able to regenerate, but a few (such as the red and blue Linkia star) can grow an entire starfish from a single ray. The regeneration of these stars is possible due to the vital organs kept in their arms. 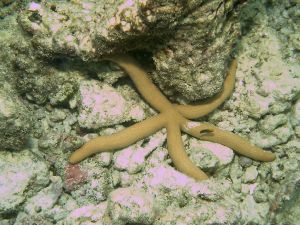 Fossil starfish and brittle stars are first known from rocks of the Ordovician age indicating that two groups probably diverged in the Cambrian. However, Ordovician examples of the two groups show many similarities and can be difficult to distinguish. Complete fossil starfish are very rare, but where they do occur they may be abundant.

Most fossil starfish consist of scattered individual plates or segments of arms, since the endoskeleton is composed of multiple plates that fall apart and are scattered after death and the decay of the soft parts of the creature. Scattered starfish ossicles are relatively common in the Cretaceous Chalk Formation of England.