Brittle star is the common name for any of the marine organisms in the echinoderm class Ophiuroidea, characterized by long, flexible, typically slender arms joined to a central body disk. They resemble the related starfish (sea stars), but with the central body disk sharply marked off from the arms and with the arms generally slender, among other differences. As members of Ophiuroidea, they also are known as ophiuroids. The name brittle stars reflects their ability to break off arms as a defense against predators, with the arms later regenerating.

Brittle stars may be more specifically identified with the members of the clade Ophiurida within Ophiuroidea, and known as ophiurids, while the clade Euryalida are commonly known as basket stars. This article will focus on the larger sense of brittle stars as members of Ophiuroidea.

There are some 1,500 species of brittle stars living today, and they commonly are largely found in deep waters more than 500 meters (1,650 feet) down. They are an important part of benthic food chains, consuming detritus, plankton, worms, and small mollusks and crustaceans, while themselves being prey for bottom feeding fish and crabs. For humans, they hold little commercial value, and are rarely seen given their inhabiting deeper waters, but they still hold a fascination for human beings given their beauty and unique behavior.

Brittle stars are echinoderms, which are marine invertebrates comprising the phylum Echinodermata and generally characterized by a hard, internal calcite skeleton, a water-vascular system, adhesive "tube feet," and five-rayed radial symmetry at some point in their lives. In addition to the brittle stars, this phylum includes the starfish, sand dollars, crinoids, sea urchins, and sea cucumbers. 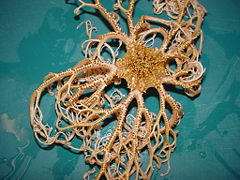 Many basket stars have many-branched arms.

Brittle stars comprise one of the classes within Echinodermata, the class Ophiuroidea. The ophiuroids have a central disc from which arms extend. Ophiuroids generally have five long, slender, whip-like arms, which extend in pentaradial symmetry and may reach up to 60 centimeters (two feet) in length on the largest specimens. They use these flexible arms to crawl across the sea floor. The tube feet that are common to echinoderms, and often used for movement in other echinoderms, primarily serve in brittle stars as tactile organs.

Many of the ophiuroids are rarely encountered in the relatively shallow depths normally visited by humans, but they are a diverse group.

Ophiuroidea contains two large clades: Ophiurida and Euryalida. Although both together can be considered brittle stars, the "true brittle stars" are members of Ophiurida, while Euryalida are known as basket stars. Many of the basket stars have characteristic many-branched arms. 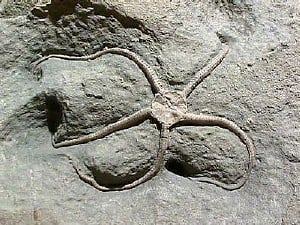 Fossil brittle star Palaeocoma egertoni from the Jurassic of England.

Like all echinoderms, the Ophiuroidea possess a skeleton of calcium carbonate in the form of calcite. In ophiuroids, the calcite ossicles are fused to form armor plates, which are known collectively as the test.

Of all echinoderms, the Ophiuroidea may have the strongest tendency toward five-segment radial (pentaradial) symmetry. The body outline is similar to the Asteroidea (starfish or sea stars), in that ophiuroids have five arms joined to central body disk. However, in ophiuroids the central body disk is sharply marked off from the arms. The disk contains all of the viscera. That is, the internal organs of digestion and reproduction never enter the arms, as they do in the Asteroidea. 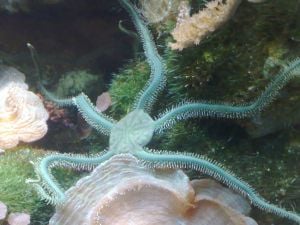 The brittle star's mouth is rimmed with five jaws, and serves as an anus (egestion) as well as for ingestion. Behind the jaws is a short esophagus and a large, blind stomach cavity which occupies much of the dorsal half of the disk. Ophiuroids have neither a head nor an anus. Digestion occurs within ten pouches or infolds of the stomach, which are essentially ceca and extend into the arms, just like sea stars. The stomach wall contains glandular hepatic cells.

The nervous system consists of a main nerve ring which runs around the central disk. At the base of each arm, the ring attaches to a radial nerve, which runs to the end of the limb. Ophiuroids have no eyes, as such. However, they have some ability to sense light through receptors in the epidermis. These are especially found at the ends of their arms, detecting light and retreating into crevices.

Gas exchange and excretion occur through cilia-lined sacs called bursae; each opens onto the interambulacral area (between the arm bases) of the oral (ventral) surface of the disc. Typically there are ten bursae, and each fits between two stomach digestive pouches.

Both the Ophiurida and Euryalida (the basket stars) have five long, slender, flexible whip-like arms, up to 60 centimeters in length. They are supported by an internal skeleton of calcium carbonate plates that are referred to as vertebral ossicles. These "vertebrae" articulate by means of ball-in-socket joints, and are controlled by muscles. They are essentially fused plates, which correspond to the parallel ambulacral plates in sea stars and five Paleozoic families of ophiuroids. In modern forms, the vertebrae are along the median of the arm. The body and arms also bear calcite plates (ventral and dorsal) and delicate spines (lateral), which protect the vertebral column. The spines, in ophiuroids, compose a rigid border to the arm edges, whereas in euryalids they are transformed into downward-facing clubs or hooklets.

Euryalids are similar to ophiurids, albeit commonly larger, but their arms are forked and branched.

Ophiuroid podia generally function as sensory organs. They are not usually used for feeding, as in Asteroidea. In the Paleozoic era, brittle stars had open ambicular grooves but in modern forms these are turned inward.

In living ophiuroids, the vertebrae are linked by well-structured longitudal muscles. Ophiuroida move horizontally, and Euryalina move vertically. The latter have bigger vertebrae and smaller muscles. They are less spasmodic, but can coil their arms around objects, holding even after death. These movement patterns are distinct to the taxa, separating them. Ophiuroida move quickly when disturbed. One arm presses ahead, whereas the other four act as two pairs of opposite levers, thrusting the body in a series of rapid jerks. Although adults do not use their tube feet for locomotion, very young stages use them as stilts and even serve as an adhesive structure.

Brittle stars use their arms for locomotion. They do not, like sea stars, depend on tube feet, which are mere sensory tentacles without suction in brittle stars. Brittle stars move fairly rapidly by wriggling their arms, which are highly flexible and enable the animals to make either snake-like or rowing movements. Their movement has some similarities with animals with bilateral symmetry.

The ophiuroids diverged in the Early Ordovician, about 500 million years ago. Today, ophiuroids can be found in all of the major marine provinces, from the poles to the tropics. In fact, crinoids, holothurians, and ophiuroids live at depths from 16 meters to 35 meters all over the world. Basket stars are usually confined to the deeper parts of this range. Ophiuroids are known even from abyssal (>6000 meter) depths. However, brittle stars are also common, if cryptic, members of reef communities, where they hide under rocks and even within other living organisms. A few ophiuroid species can even tolerate brackish water, an ability otherwise almost unknown among echinoderms.

Brittle stars are generally scavengers or detritivores, which are selective due to their inability to digest mass mud intake like sea stars. Small organic particles are moved into the mouth by the tube feet. Ophiuroids may also prey on plankton and small crustaceans, mollusks, and worms. Basket stars, in particular, may be capable of suspension feeding, using the mucus coating on their arms to trap plankton and bacteria. (They move around like starfish, and have tube feet.) Certain tube feet, derived from the ectoderm, can act as chemoreceptors.

Nonetheless, brittle stars consume small organisms if available. In large, crowded areas, brittle stars eat suspended matter, and sea-floor currents vindicate this. In basket stars, the arms are used to rhythmically sweep food to the mouth. Pectinura will consume beech pollen in the New Zealand fiords (since the trees there hang over the water). Eurylina will cling to a coral branch browse on the polyps of the reef.

The sexes of brittle stars are separate in most species, though a few, such as Amphipholis squamata, are hermaphroditic. Gonads, found only in the disc, open into the pouches in the integument between radii, called genital bursae. Gametes are then shed by way of the bursal sacs. Many species actually brood develop larvae in the bursae. The ophiuroid coelom is strongly reduced, particularly in comparison to other echinoderms. In a few species the female carries a dwarf male, clinging to it.

Brittle stars generally sexually mature in two years, become full grown in three to four years, and live up to five years. Euryalina, such as Gorgonocephalus, may well live much longer.

Ophiuroids can readily regenerate lost arms or arm segments unless all arms are lost. Ophiuroids use this ability to escape predators, similar to how lizards deliberately shed (autotomize) the distal part of their tails to confuse pursuers. 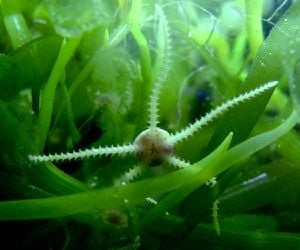 Brittle stars live in areas from the low-tide level downwards. Shallow species live among sponges, stones, or coral, or under the sand or mud, with only its arms protruding. Deep-water species tend to live in or on the sea floor or adhere to coral or an urchin.

The main parasite to enter the digestive tract or genitals are Protozoa. Crustaceans, nematodes, trematodes, and polychaete annelids, also are parasites on brittle stars. Algal parasites like Coccomyxa ophiurae cause spinal malformation. Unlike sea stars and sesa urchins, annelids are not a typical parasite.

Brittle stars are not food for humans. However, they are part of the food chain of commercially important species.

Retrieved from https://www.newworldencyclopedia.org/p/index.php?title=Brittle_star&oldid=968303
Categories:
This page was last edited on 3 April 2013, at 15:59.
Content is available under Creative Commons Attribution/Share-Alike License; additional terms may apply. See Terms of Use for details.