Crinoids, which include sea lilies and feather-stars, are marine invertebrates that make up the class Crinoidea of the echinoderms (phylum Echinodermata). Crinoids are characterized by a mouth on the top surface that is surrounded by feeding arms. They have a U-shaped gut, and their anus is located next to the mouth. Crinoids usually are sessile, having a stem used to attach themselves to a substrate; however, many live attached only as juveniles and become free-swimming as adults.

Echinoderms, which also include starfish, sand dollars, sea urchins, and sea cucumbers, are generally characterized by a hard, internal calcite skeleton, a water-vascular system, adhesive "tube feet," and five-rayed radial symmetry (at some point in their lives). Although the basic echinoderm pattern of five-fold symmetry can be recognized, most crinoids have many more than five arms.

Crinoids live both in shallow water and in depths as great as 6000 meters. There are only a few hundred known modern forms, but crinoids were much more numerous both in species and numbers in the past. Some thick limestone beds dating to the mid- to late-Paleozoic are entirely made up of disarticulated crinoid fragments. Thus, crinoids offer not only important ecological values, as part of food chains, and aesthetic values, with diverse shapes and colors that bring joy to humans, but also the rich fossil history of crinoids reveals a lot about the development of life.

As with other echinoderms, crinoids exhibit fivefold radial symmetry, or multiples thereof, as adults. (Echinoderms generally start out with bilateral symmetry as free-swimming larvae, but metamorphosize to the pentaradial symmetry.) The five arms of crinoids branch out to form many more arms—as many as 200 in some feather star species (Towle 1989). The end of these arms have sticky tube feet that capture food and serve in respiration.

Crinoids are sessile, having a long stalk that attaches them to rocks or the sea bottom, but feather stars eventually become detached (Towle 1989). Unlike other echinoderms, the mouth of crinoids faces up rather than the sea bottom (Towle 1989). Echinoderms possess an open and reduced circulatory system, and have a complete digestive tube (tubular gut), with the anus located next to the mouth. They lack excretory, respiratory, and circulatory systems, but have a water-vascular system (network of water-filled canals).

Modern crinoids are said to most closely resemble the fossils of the Cambrian echinoderms (Towle 1989).

The earliest known crinoids come from the Ordovician. They are thought to have evolved from primitive echinoderms known as Eocystoids. Confusingly, another early group of echinoderms were also the Eocrinoids, but that group is currently thought to be an ancestor of blastoids (another class of echinoderms) rather than of crinoids.

The crinoids have had an eventful geologic history. Once evolved, they soon spread to a variety of marine habitats. The group as a whole suffered a major crisis during the Permian period, when most of the crinoid forms of the Paleozoic era died out, with a few surviving into the Triassic period. During the Mesozoic era, there was another great radiation of the crinoids with more modern forms, possessing flexible arms, becoming widespread.

The long and varied geological history of the crinoids demonstrates how well the echinoderms have adapted to filter-feeding. The fossils of other stalked filter-feeding echinoderms, such as blastoids, are also found in the rocks of the Paleozoic era. These extinct groups can exceed the crinoids in both numbers and variety in certain horizons. They were evidently competing with the crinoids on an equal basis. However, none of these others survived the crisis at the end of the Permian period.

Some fossil crinoids, such as Pentacrinites, seem to have lived attached to floating driftwood and large colonies are often found. It is speculated that sometimes driftwood would become waterlogged and sink to the bottom, taking the attached crinoids with it. The stem of Pentacrinites can be several metres long. Modern relatives of Pentacrinites live in gentle currents attached to rocks by the end of their stem, which is fairly short. 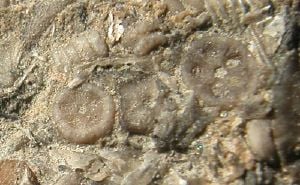 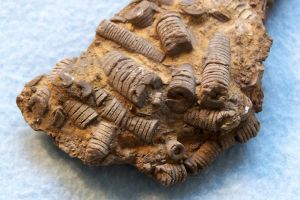 Immensely common throughout the central and southeastern United States, fossilized crinoids have been mistakenly taken for Indian artifacts by many a casual observer. While large conglomerate samples can often be found, small, individual sections of the crinoid stem are an immensely common find. These short segments are called "Indian beads" or "Indian money," by many people.