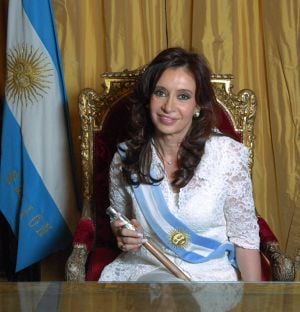 Cristina Elizabet Fernández de Kirchner (February 19, 1953 - ), commonly known as Cristina Fernández or Cristina Kirchner, is a lawyer and Argentine politician from the Justicialist Party and the current President of Argentina. She is the wife of former President of Argentina Néstor Kirchner. Before assuming the presidency, she was a Senator for Buenos Aires Province and acted as First Lady during her husband's term. In the October 2007 general election, Fernández ran for President of Argentina, representing the ruling Front for Victory party. She won the presidency with 45.29 percent of the vote, and a 22 percent lead over her nearest rival—one of the widest margins obtained by a candidate since democracy returned in 1983—avoiding the need for a runoff election.

She is Argentina's second female president (after Isabel Martínez de Perón, or Eva), but the first to be elected. Sworn in on December 10, 2007, she became the first wife in history to be elected to succeed her husband as a president and South America's second elected woman head of state—after Chile's Michelle Bachelet. Néstor Kirchner has also become the first First Gentleman in Argentine history. Kirchner is one of a comparatively small number of women who have achieved their nation's highest elected office. Several other women have achieved high office whose husbands or fathers also led their nations, such as Benazir Bhutto of Pakistan and Megawati Sukarnoputri of Indonesia. Kirchner has inevitably attracted comparison with Eva Peron. Both "played a considerable influence over their presidential husbands and enjoyed considerable support from Argentina's poor working communities" but Kirchner is generally perceived to have "built a career largely on her own merit."[1] She has expressed a sense of responsibility towards her gender in assuming office, and is expected to aim at socially inclusive policies during her administration.[2]

Fernández was born Cristina Elizabet Fernández in La Plata, province of Buenos Aires, daughter of Eduardo Fernández (of Spanish heritage) and Ofelia Wilhelm (of German heritage). She studied law at the National University of La Plata during the 1970s. During her studies there she met her future spouse, Néstor. They married on March 9, 1975, and had two children: Máximo and Florencia. Florencia received international media attention during early 2008, when she started keeping a Fotolog.[3]

Kirchner started her political career in the Peronist Youth movement of the Justicialist Party in the 1970s. During the period of authoritarian rule in the country, she and Néstor dropped out of politics and practiced law in Río Gallegos. She picked up politics again in the late 1980s, and was elected to the Santa Cruz provincial legislature in 1989, a position to which she was re-elected in 1993.

Kirchner provided the main backbone to her husband's successful campaign for the presidency in 2003, against two other Justicialist candidates and several other competitors. In the April 27, 2003 presidential election first round, former president Carlos Saúl Menem won the greatest number of votes (25 percent), but failed to get the votes necessary to win an overall majority. A second-round run-off vote between Menem and second-place finisher Néstor Kirchner was scheduled for May 18. Feeling certain that he was about to face a resounding electoral defeat, Menem decided to withdraw his candidacy, thus automatically making Kirchner the new president, with 21.97 percent of the votes (the lowest number in the history of the country). 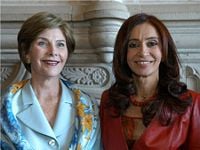 Cristina Kirchner (on the right) next to U.S. First Lady Laura Bush, on November 5, 2005, during the state visit of the Bushes for the Mar del Plata Summit of the Americas.

During her husband's term, Cristina Kirchner became an itinerant ambassador for his government. Her highly combative speech style polarized Argentine politics, recalling the style of Eva Perón. Although she repeatedly rejected the comparison later, Cristina once said in an interview that she identified herself "with the Evita of the hair in a bun and the clenched fist before a microphone" (the typical image of Eva Perón during public speeches) more than with the "miraculous Eva" of her mother's time, who had come "to bring work and the right to vote for women."[4]

She was the main candidate for Senator of the Front for Victory faction of her party in the province of Buenos Aires, for the October 2005 elections, in a heated campaign directed mainly against Hilda González de Duhalde, the wife of former interim president Eduardo Duhalde. Kirchner won the elections by a 25 percent margin over González.

Election to Presidency of Argentina 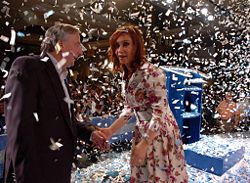 With Kirchner leading all the pre-election polls by a wide margin, her challengers were trying to force her into a run-off. She needed either more than 45 percent of the vote, or 40 percent of the vote and a lead of more than 10 percent over her nearest rival, to win outright. The legality of her presidential bid funding was later disputed when U.S federal prosecutors alleged that the government of Venezuelan President Hugo Chávez secretly tried to funnel nearly $1 million in cash to her campaign, while these allegations were vehemently denied by both the Argentinean and Venezuelan governments.[5]

Kirchner finally won the election in the first round with 45.29 percent of the vote, followed by 22 percent for Elisa Carrió (candidate for the Civic Coalition) and 16 percent for former Economy Minister Roberto Lavagna. Eleven others split the remaining 15 percent. Fernández was popular among the suburban working class and the rural poor, while Carrió received more support from the urban middle class. Of note, Fernández lost the election in the three largest cities (Buenos Aires, Córdoba, and Rosario), although she won in most other places elsewhere, including the large provincial capitals such as Mendoza and Tucumán.

The president elect began a four-year term on December 10, 2007, facing challenges including inflation, union demands for higher salaries, private investment in key areas, lack of institutional credibility (exemplified by the controversy surrounding the national statistics bureau, INDEC), utility companies demanding authorization to raise their fees, low availability of cheap credit to the private sector, and the upcoming negotiation of the defaulted foreign debt with the Paris Club.

The President in a meeting with her Ministers.

On November 14, 2007, Cristina Kirchner announced the names of her new cabinet, which started working with her on December 10. Of the 12 ministers appointed, seven were already ministers in Néstor Kirchner's government whilst the other five took office for the first time. 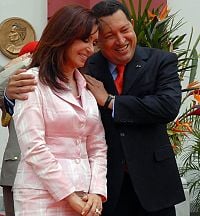 During the first days of her presidency, Argentina's relations with the United States deteriorated as a result of allegations made by a United States assistant attorney of illegal campaign contributions, a case known as the maletinazo (suitcase scandal). According to these allegations, agents tried to pressure a Venezuelan-American citizen (Guido Alejandro Antonini Wilson) to lie about the origin of $790,550 in cash found in his suitcase on August 4, 2007, at a Buenos Aires airport. U.S. prosecutors said the money was sent to help Fernandez's presidential campaign.

Fernandez de Kirchner and Venezuelan president Hugo Chavez, called the allegations "a trashing operation" and part of a conspiracy orchestrated by the United States to divide Latin American nations. On December 19, 2007, she restricted the U.S. ambassador's activities and limited his meetings to Foreign Ministry officials; a treatment reserved for hostile countries, in the opinion of a former U.S. Assistant Secretary of State.[6] However, on January 31, during a special meeting with the Argentine President, the United States ambassador in Argentina, Earl Anthony Wayne, clarified that the allegations "were never made by the United States government," and the dispute cooled down.[7] Elisa Carrio and María Estenssoro, both high ranking members of the main opposition parties, have claimed that the Argentine government's response to the allegations and its criticism of the U.S. are a "smokescreen" and described U.S. involvement in the affair as merely symptomatic, alleging that corruption in the Argentinean and Venezuelan governments are the root cause of the scandal.

In March 2008, Fernandez de Kirchner's government introduced a new sliding-scale taxation system for agricultural exports, effectively raising levies on soybean exports to 44 percent from 35 percent at the time of the announcement.[8] This led to a nationwide lockout by farming associations, starting on March 12, with the aim of forcing the government to back down on the new taxation scheme. As a result, on March 25, thousands of demonstrators banging pots massed around the obelisk in the capital and in front of the presidential palace. Protests extended across the country. In Buenos Aires, hours after Fernandez attacked farmers for their two-week strike and "abundant" profits, there were violent incidents between government supporters and protesters, and the police was accused of willfully turning a blind eye.

The media was harshly critical of Luis D'Elia, a former government official who took part in the incidents, with some media sources and members of the opposition (notably Elisa Carrio), claiming that he and his followers had violently suppressed the protest pursuant to the government's orders.

On April 1, the government organized a rally during which thousands of pro-government protesters marched through downtown Buenos Aires in support of the Argentine leadership. Fernandez recently called on farmers to act "as part of a country, not as owners of a country."

A poll published in the Spanish newspaper El Pais revealed that, following the protests, Fernandez's approval rating had "plummeted" from 57.8 per cent at the start of her administration.[9] However, El País did not cite the source of its numbers.

Relationship with the media

In April 2008, Fernandez received a stern public rebuke from ADEPA (the Argentine Journalists Association) for having publicly accused the popular cartoonist Hermenegildo Sábat of behaving like a "quasi mafioso."[10] In addition, a government proposal to create a watchdog to monitor racism and discrimination was received with suspicion by ADEPA, who called it a "covert attempt to control the media."[11] In 2006, Nestor Kirchner, Fernandez's husband and predecessor in office, received a similar rebuke for publicly and falsely denouncing that Joaquín Morales Solá, a journalist critical of the government, had produced an inflammatory text published in 1978.

Regardless of how her tenure in office as Argentina's first elected woman President, and South America's second elected female head of state is evaluated, her place in history seems assured. Discussion will inevitably revolve around the fact that she belongs to a political family, which may be presented as an argument intended to detract from her personal achievements. Yet political families have played significant roles in the politics of many nations, not least of all the United States, where two Presidents have had sons who also became President (John Adams and George H.W. Bush). The advantage of name recognition is certainly a factor in anyone's political success. Those who enter public service, too, are often inspired by the example of others whether their heroes are members of their own family, or people whom they may never have met but admire. She has expressed both a sense of responsibility for leading her country and for her gender.[12] Her policies are expected to aim at social inclusion, which might be an especially feminine concern.[13]

Retrieved from https://www.newworldencyclopedia.org/p/index.php?title=Cristina_Fernández_de_Kirchner&oldid=1068634
Categories:
Hidden category:
This page was last edited on 30 April 2022, at 19:37.
Content is available under Creative Commons Attribution/Share-Alike License; additional terms may apply. See Terms of Use for details.